Undocumented in America: The fear is real. Is the problem exaggerated? 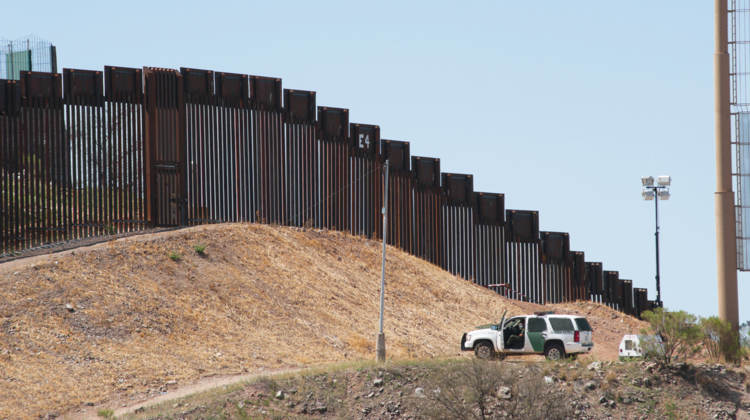 They work in your restaurants and on your suburban lawns. They labor in your factories and build your homes. They do odd jobs or any jobs. Their children go to your schools and play with your children.

And after years in the United States as immigrants without legal documentation, many of them still live in the national shadows. In New York’s Westchester County, a small group of undocumented parents surfaces one January night at a parish council meeting. Through a translator, Gustavo speaks on behalf of all.

Despite simplistic language that depicts a flood of undocumented migrants crossing the U.S. southern border, migration from Mexico has slowed considerably in recent years and even reversed.

“The fear that we undocumented people have is very great,” he says. “Could a traffic stop mean deportation,” he wonders. What would become of the children left behind?

“I’m not sure how the community can help us in this difficult situation for our families, for our children,” Gustavo says, his eyes scanning the faces of the other members of his parish. “But can you help us?” he asks. 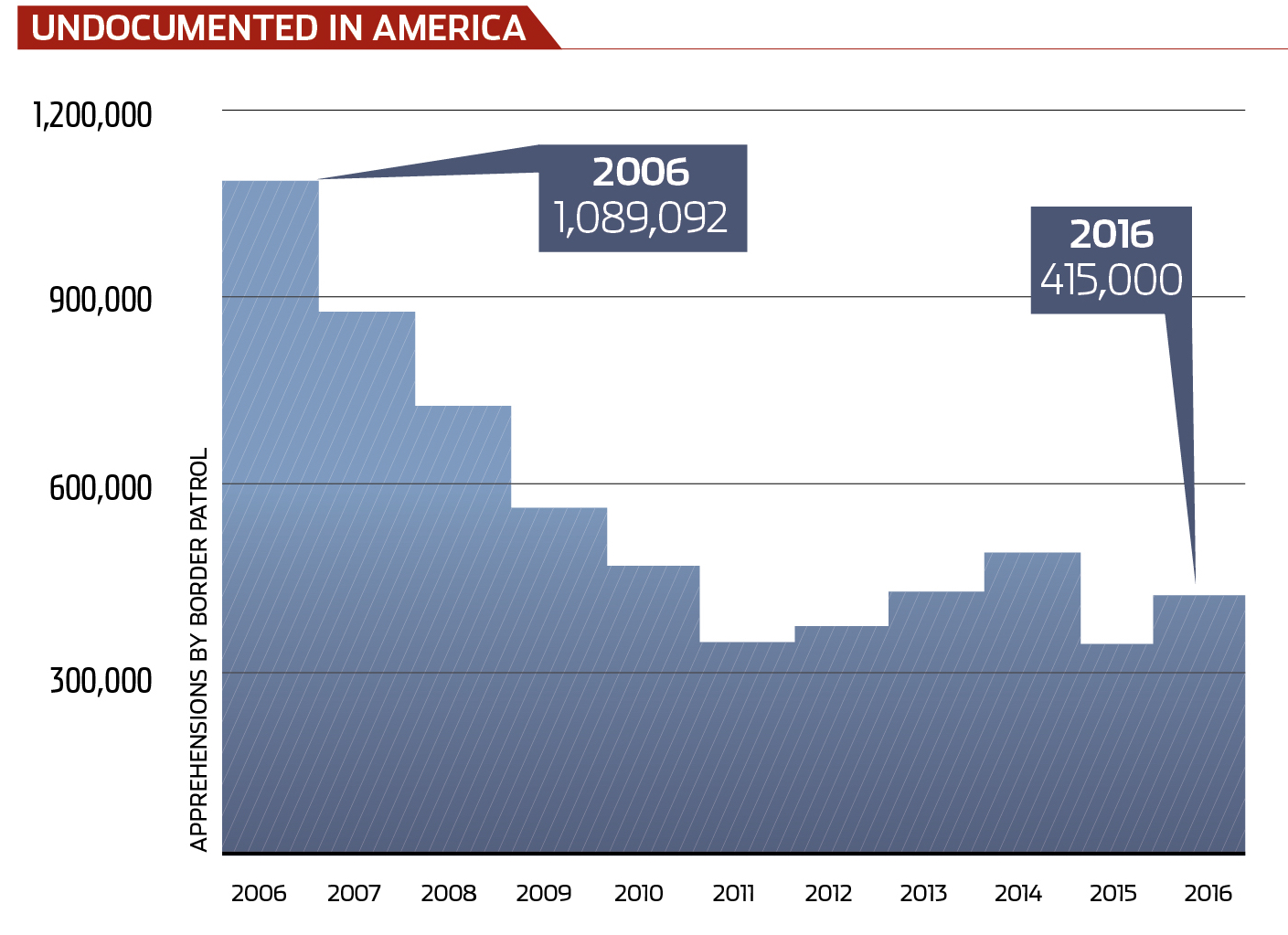 The simple appeal stills the parish meeting room. “If ever there was a time to take a stand, it’s now,” a council member finally says.

Containing undocumented immigration with a border wall and threats to deport millions of people were among President Donald J. Trump’s talking points as a candidate. Now, in the early weeks of his administration, the president is fulfilling commitments that many believed were mere campaign bluster. The fear created by Mr. Trump’s recent executive orders among undocumented families is real, but the urgency of addressing the “problem” of undocumented people may be less so.

Despite simplistic language that depicts a flood of undocumented migrants crossing the U.S. southern border, migration from Mexico has slowed considerably in recent years and even reversed. Apprehensions by the Border Patrol, reported by fiscal year, declined from about 1.1 million in 2006 to just over 337,000 in 2015. They spiked in 2016 to 416,000—with increasing numbers of Central American families and unaccompanied minors picked up. 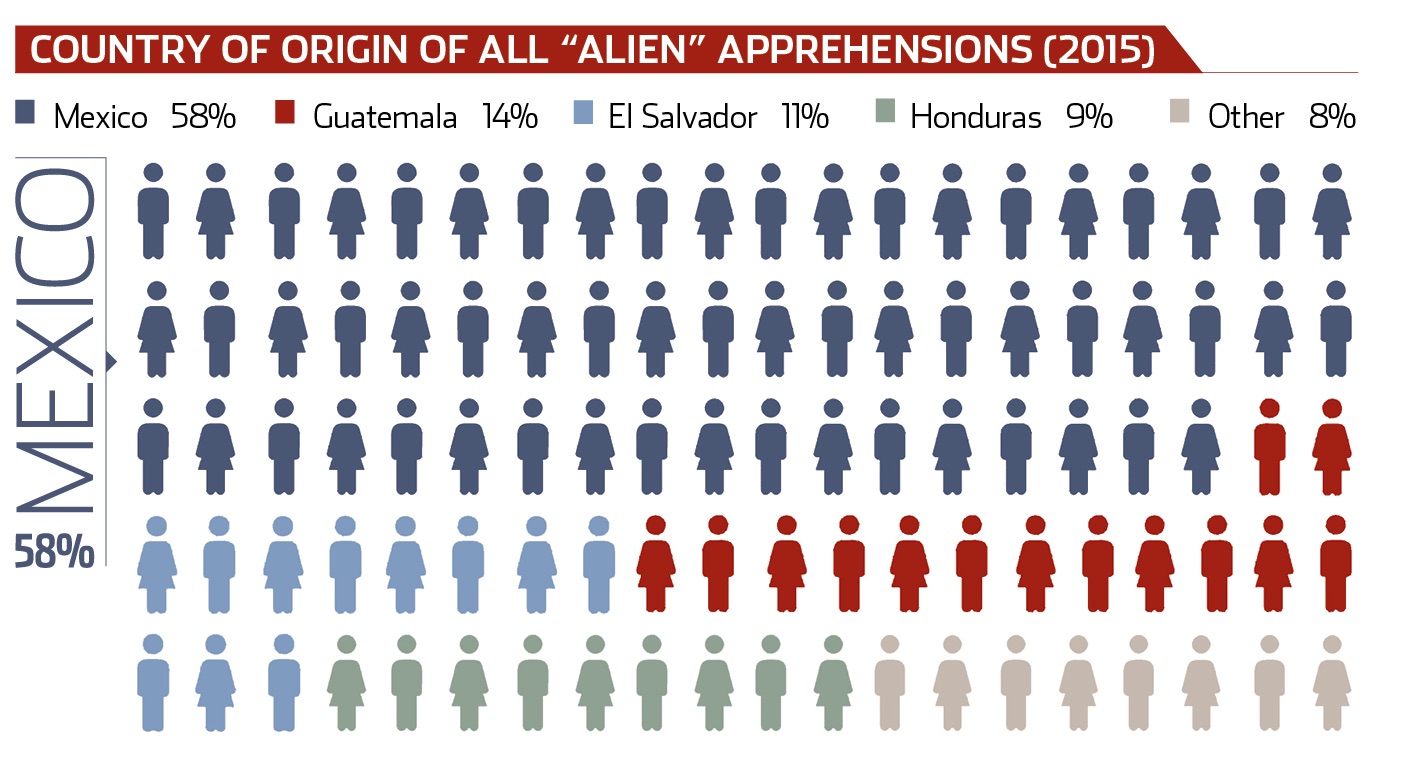 But even if an immigrant inundation is more rhetorical than real, the question of how to deal with the undocumented people already in the United States remains. The overall number of undocumented immigrants has stabilized in recent years from a 2007 peak of 12.2 million to just over 11 million people.

A little more than half of undocumented residents are of Mexican origin. But from 2009 to 2014, the number of undocumented Mexican immigrants fell from 6.4 million to 5.8 million, according to the Pew Research Center, while those from other nations rose from 5.0 million to 5.3 million, with significant increases from Guatemala, Honduras and the continents of Africa and Asia.

Two-thirds of the undocumented have lived in the United States for more than a decade, representing thousands of families that have inhabited a prolonged limbo. A comprehensive reform package that promised to rationalize U.S. immigration policy, long supported by the U.S. bishops, has moldered in Congress since 2013.

President Obama tried to push immigration policy forward with a mix of record deportations that emphasized enforcement and executive orders aimed at protecting some groups—among them the so-called Dreamers, young adults who were brought as children to the United States without authorization. But his successor appears intent on more punitive measures.

Mr. Trump has pledged to “begin removing the more than two million criminal illegal immigrants from the country,” a number disputed by advocates who say there are no more than 820,000 undocumented people with criminal convictions, many for crimes relating to their lack of status. The End Illegal Immigration Act would imprison anyone who re-enters the United States after having been deported.

Under President Obama, the United States deported a record 2.5 million people. Hundreds of thousands of these deportees left children and family behind, and many have sought to return to them. Under Mr. Trump’s proposed law, they would fill the nation’s prisons.

Over the past decade, as spending on immigration enforcement skyrocketed, budgets aimed at regional stabilization and economic development remained stingy.

What becomes of the children of deported immigrants represents a unique challenge. The Migration Policy Institute estimates that there were 5.1 million children in the United States with at least one parent who was an undocumented immigrant between 2009 and 2013. Overall, about 80 percent of these children—4.1 million—are U.S. citizens themselves. Studies are only now grappling with the psychological and developmental impact on U.S.-citizen children when a parent—most often a father and the primary family earner—is removed from the household because of deportation, and how living with that threat day-to-day affects child development.

Over the past decade, as spending on immigration enforcement skyrocketed, budgets aimed at regional stabilization and economic development remained stingy. Though it committed $142 million, in 2016 the United States actually delivered just $47 million in aid to Mexico, the lion’s share directed to security initiatives and just $4.4 million to economic development. Guatemala received just $57 million in total aid that year; Honduras, $49 million; and El Salvador, $29 million.

That same year the United States spent $19.4 billion on immigration enforcement, and America’s border wall may cost as much as $40 billion.

Kevin Clarke is chief correspondent for America magazine. Robert David Sullivan, an associated editor for America, contributed to this report.

...the [leader] is fulfilling commitments that many believed were mere campaign bluster
Where have we heard this one before?

This article is biased because it lacks balance and leaves out important questions and issues.

The U.S. is responsible in part for the 12 million undocumented immigrants who entered the U.S. illegally over past decades. A pathway to citizenship and/or legalization is the only compassionate and responsible solution, but such a solution is contingent on other things. For example, such a pathway would be irresponsible if our borders remain insecure and our laws are not enforced. Imagine giving legalization and/or citizenship to 12 million undocumented immigrants without doing anything to fix our present borders? Is it not obvious that this would create a magnet for another 12 million immigrants to enter the U.S. illegally? Trump makes a good but imperfect case for securing our border and deporting serious felons such as drug lords, murderers, rapists and thugs. Whether there are 2 million or 800,000 violent felons who entered the U.S. illegally is not the point. Does anyone think 800,000 felons are ok but 2 million are not?

Once the border is secured as best as possible and violent felons are deported, then legislation can be introduced to allow a pathway to legalization and/or citizenship for these 12 million undocumented immigrants. Trump's so-called plan regarding how the 12 million will be treated will not be based on his campaign rhetoric. Until we see proposed legislation we should not be exaggerating things. This will happen once our the border is secured and serious criminals deported. Make no mistake about what I am suggesting. For example, it is a felony if someone uses a false and/or illegal Social Security Card. However, I disagree that such non-violent 'felons should be deported.

However, let's get real for a moment. Our immigration policy and its enforcement is a shame and Washington has done little to fix it. Obama and Clinton wanted open borders and believed that our borders are secure. Such nonsense must stop. I suggest people take a deep breath and wait to see what gets fully implemented in terms of needed and compassionate immigration reform legislation. If Trump's immigration reform policy makes the problem worse, we should denounced it. However, if Trump's immigration reform plan results in significant or modest improvement, we should applauded it and work to make it even better.

I will judge Trump by the policies that are fully implemented, and not by his rhetoric or biased media news stories or articles that do not adequately address the issues I have already mentioned.

Americans must be honest about the causes that drive desperate people to go north, endure a dangerous journey, and try to cross the border into the US. The violence and crime is directly related to the flow of guns and the American demand for drugs. Guns purchased in the US account for 80% of the illegal firearms seized by Mexican authorities, and 40% of those in Central America. The 2016 drug report of the Department of State states that 90% of the cocaine entering the US comes through Central America and Mexico. The American appetite for drugs feeds corruption and criminality, weakening even more the fragile public security and judicial systems. The extraordinary amounts of drug money corrupt officials, create a climate of impunity, and fuel displacement of people. The Northern Triangle countries of Guatemala, Honduras, and El Salvador have been hit particularly hard.

Thank you for this comment! The question of immigration is so much more complex than building walls.

Thank you. You are correct. I remember visiting Honduras a few times before cocaine came along. It was a peaceful paradise. The country is now besieged by incredible violence and corruption resulting from cocaine trafficking and the availability of guns, so much so that people are desperate to leave. Border security must work both ways, we must control our border also and address the appetite for drugs. The wall giving us security is an expensive illusion.

Why do I think that if there were an article advocating the severest punishment for drug runners and drug users in the US that not withstanding their position expressed here both Lisa and Gabriel would be protesting and advocating leniency for such " troubled souls". Realism demands that no broken law is an excuse for another person to break yet another law.