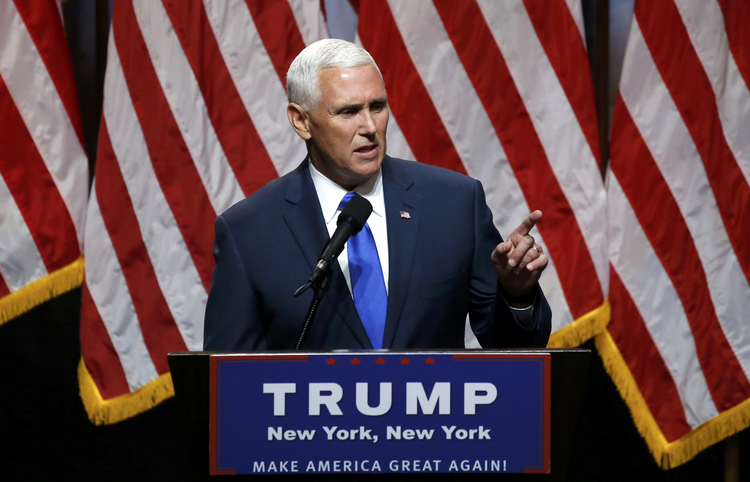 When Vice President Mike Pence arrives in South Bend this weekend, some graduates at the University of Notre Dame plan to greet him by silently walking out, a gesture of protest they say is meant to call attention to the former Indiana governor’s views on immigration, healthcare and L.G.B.T. issues.

“After Mike Pence was announced as our commencement speaker, there were about 15 or 20 of us who all came together and talked about how this made us feel, and how frustrating it was for a lot of different people,” Bryan Ricketts, a member of the class of 2017 and Notre Dame’s student body president in 2015, told America. He said as a gay man, he disagrees with Mr. Pence’s views on some social issues, including his support for individuals and businesses that do not want to serve L.G.B.T. customers because of religious beliefs.

Other students, such as Luis Miranda, said that they disagree with Mr. Pence’s views on refugees and, more broadly, the Trump administration’s plans to increase deportations of undocumented immigrants.

“We feel like this is an injustice,” Mr. Miranda told America. “My family is undocumented. For them to be able to share this day with me they have to fly from the other side of the country. They are terrified about flying because of the way [the Trump administration has been conducting] deportations.”

Mr. Ricketts said it is not designed to shut down conversation, but to prompt other graduates and their guests to reflect on policies championed by Mr. Pence.

The protest against Mr. Pence’s appearance began last month, when more than 500 rainbow flags, symbols of the L.G.B.T. movement, were distributed to students and faculty to display on campus.

As far as the walk out, Mr. Ricketts said it is not designed to shut down conversation, but to prompt other graduates and their guests to reflect on policies championed by Mr. Pence.

“We’re being respectful of people who will be there and staying for his speech. I hope this makes them think and consider why people are doing this,” he said.

Mr. Pence, was raised Catholic, but began attending a non-denominational church in college and has since described himself as “a born-again, evangelical Catholic.” He was elected governor of Indiana in 2013, a post he held until he was elected vice president in November. He is a social conservative, against abortion and same-sex marriage and in favor of the death penalty and repealing the Affordable Care Act.

In 2015, Mr. Pence asked a local Catholic Charities office not to move forward with resettling of a family of Syrian refugees in the state. At the time, John Jenkins, C.S.C., the president of the university, said in a statement, “let us welcome into our midst Syrian refugees forced by unrelenting violence to flee their homes.” The refugees eventually did settle in Indiana.

This will hardly be the first time a campus speaker at Notre Dame generates protest.

This will hardly be the first time a campus speaker at Notre Dame generates protest.

In 2001, when President George W. Bush was the speaker, a student left his seat and knelt down in the center aisle with hisback to Mr. Bush and prayed the rosary. Controversy erupted in 2009 when President Barack Obama was honored, with some students saying it was an inappropriate choice given Mr. Obama’s support for abortion rights. The local bishop chose not to attend the ceremony.

Dylan Jaskowski, a rising junior and the head of Notre Dame College Republicans, told America that the protesters “do not speak for Notre Dame as a whole, and that there are many students at this great university who are thrilled to hear the vice president speak.”

“Additionally, we would encourage all students to listen to Vice President Pence speak,” he said. “There is no greater testament to one’s time at Notre Dame than to engage in thoughtful dialogue with an open mind to opposing viewpoints.”

But organizers of the protest, who say they expect up to 100 students to join in, dismiss accusations that they are trying to stifle speech.

Mr. Ricketts said his Catholic values and the education he received at Notre Dame, as well as his admiration for the school’s former president and civil rights champion, Theodore Hesburgh, C.S.C., prompted him to protest Mr. Pence.

“He certainly has a right to speak,” Mr. Ricketts said. But “solidarity is important and you shouldn’t be silent in the face of policies when they harm you or your brothers and sisters.” He said he found it “shocking and frustrating” that Catholic leaders have not spoken out forcefully against Mr. Pence’s appearance in the same way they protested against Mr. Obama, but that he is hopeful some priests will join him during the walk out on Sunday.

Notre Dame officials say they are working with Mr. Ricketts and other graduates planning to protest in order to ensure safety for graduates, their guests and protesters.

“Students who indicated they would protest by leaving the commencement ceremony when the vice president speaks met with the Notre Dame police chief this week and assured her they would leave quietly and respectively,” a university spokesman said in a statement to America. “They are being cooperative, which was our expectation from the start.”

The university announced in March that it had selected Mr. Pence to deliver the commencement address, a break from a recent tradition of inviting newly elected presidents to speak during their first year in office.

Last December, Father Jenkins said he was unsure if Mr. Trump would receive an invitation, pointing to the political maelstrom that followed Mr. Obama’s speech.

The ceremony on Sunday comes just days before Mr. Trump and Pope Francis meet in Rome. As it happens, advisers to both leaders will be together at Notre Dame. Among those being honored by the university, in addition to Mr. Pence, is Cardinal Kevin Farrell, the former bishop of Dallas who now heads the Vatican’s office of family life.

I wonder if President Jenkins will urge the arrest and prosecution of these protesters as he did those who peacefully protested against Obama.

The local Bishop officiated at the Baccalaureate Mass, urged Catholics in his diocese not to participate in protests organized by various off campus groups, but he personally refused to attend the Graduation and the Obama speech

Pence likes to play up his Irish Catholic roots. “Mr. Pence, was raised Catholic, but began attending a non-denominational church in college and has since described himself as “a born-again, evangelical Catholic ‘”. Oh yeah, tell me, what is a born-again evangelical Catholic? Or is that just what American Catholicism has become? Sometimes I wonder.

It’s one thing to acknowledge ecumenically those Protestants among us, largely born into it and, unfortunately in some instances, their anti-Catholic prejudices. But for someone born a Catholic to brag about his Protestantism as just a variation on Catholicism is quite another thing from my perspective. I rely on the judgments of Popes during the years of the Reformation for my ultimate conclusion. He’s a heretic and why is he being honored by Notre Dame?

Of course, I do mean to be satirical and sarcastic. But what do all those faithful Catholics smeared for expressing their “liberal” opinions think in circumstances such as these?

I'll tell you what I think, Vincent. Mike Pence is a politician. Like most politicians, he will use religion to promote himself and his agenda. Paul Ryan does it, Newt Gingrich does it. Even Cardinal Burke does it (he seems more like a politician than a pastor to me). Religio-political rhetoric can not be trusted. We should tune it out. In inviting political celebrities (who spout personal religious convictions) to their commencement ceremonies religious institutions (Notre Dame, Liberty University, etc.) compromise whatever message their education credentials claim to uphold.

The only effective political person that I know who had a spirituality worth speaking about was Dag Hammarskjold. And he didn't speak about it.

You write that the aggrieved student plans to protest Pence's "support for individuals and businesses that do not want to serve L.G.B.T. customers because of religious beliefs." The phrase is deceptive. What was at issue in Indiana was not the customers requesting service but the nature of the services requested. It is not a small difference.

I do not agree with much of V.P. Pence's political views.

But at least he is against abortion. That he would support helping all
pregnant women and their children once they are born.

Yet, Obama did little to prevent abortions and yet Notre Dame invited
him to speak.

The CDC reports that LGBT people represent 2.5% of the total population. At Notre Dame, and most other locales, this is a case of the tail wagging the dog.

To the pending graduates of Notre Dame, your planned actions show that you learned the true message of the the Church, a sharing of God's love for all peoples and actions deeply motivated by that love. Let God's love shine.