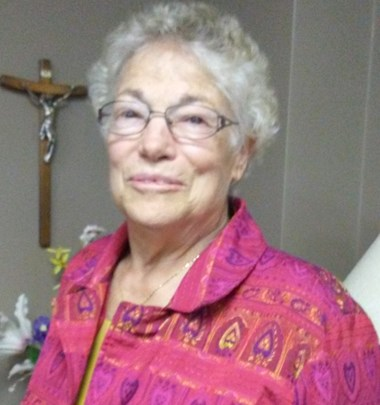 Presidential candidates Hillary Clinton and Donald J. Trump have been in the national spotlight for decades. But Americans are still getting to know their vice presidential running mates, Senator Tim Kaine, Democrat of Virginia, and Governor Mike Pence, Republican of Indiana.

Someone who has known Pence since he was a child is Sister Sharon Bierman, a Benedictine sister from Our Lady of Grace Monastery in Beech Grove, Ind. She taught Pence in seventh and eighth grades at St. Columba School in Columbus, the Indiana town where he grew up.

Bierman, whom I met at a recent American Benedictine Academy conference, recalls her former student as outgoing, smart and diligent—someone who never failed to hand in an assignment and usually got As or Bs.

She says she had hoped he would one day become a priest.

He told her he wanted to be a "father," but one who marries and has children.

In his acceptance speech at the Republican National Convention, Pence said the title he is proudest to hold is "D-A-D."

In their eighth-grade graduation booklet, some of Pence's classmates predicted he would one day run for president.

Whenever he encounters his former Benedictine teachers, Bierman says Pence thanks them for encouraging him to join The Optimists, a speech club.

"I introduced him to The Optimists' speech contest," Bierman says. "He said that has been the most helpful thing for him as he pursued a political career. He wrote about historical things and many times he won first place" in the contests.

Bierman sometimes attends speeches Pence gives in his home state with other sisters from her monastery. "He always says, 'Thank you, without you I would have been a hoodlum.' Of course, that wasn't true. He came from a very good family."

Pence's parents, she recalls, never missed a report card day at St. Columba or a chance to talk with teachers about their son's progress.

Bierman taught Pence math, science and religion, and says he was quick to memorize Catholic prayers and catechism. As an adult, Pence left the Catholic Church to join his wife's evangelical Protestant congregation. Bierman said she was disappointed but not surprised.

"Mike believed in union in the family, so he became an evangelical to be one with his wife and children so there would not be a separation in his family," she says.

Bierman can still be a stern teacher. She has some advice for Pence: Tone down the rhetoric about Hillary Clinton. Of his acceptance speech in Cleveland, she says, "In the beginning, when he laid out his ideas for what he was going to do as vice president, I loved that part." He did what he was taught in The Optimists speech club, she notes—be clear, concise and direct.

She says she tuned out, however, when he began to criticize Clinton. "I did not like that at all, and I don't like it when Mr. Trump does it either.”

Clinton, she says, deserves respect as a former senator, secretary of state and the first woman nominated for president by a major party.

Bierman hopes both Republican hopefuls ultimately will tamp down on personal attacks in the coming weeks. She believes Pence can "soften" Trump.

"I think Michael will continue to practice his own ideals.... It seems Mr. Trump really respects Michael. So I am hoping Mr. Trump will start following Mike's suggestions and stop talking about building walls and separating people."

Bierman is not disclosing who she will vote for in November. Her former student will get her blessing, but for now it appears uncertain whether he will get her vote because of the man who is at the top of the Republican ticket.

She says she was "sorely disappointed" by Trump's acceptance speech, which she describes as "that hour and a half of yelling."

“I hope Mike will help him be more realistic about what they can accomplish and [encourage Trump to] take away some of the more blaring comments about other races and cultures,” she adds. “That would be a great help to Mr. Trump if he would listen to Mike's values.

Before he became the Republican running mate, Pence briefly entered the national spotlight by supporting an Indiana law critics said would have allowed business owners to refuse services to gays if homosexuality and same-sex marriage conflict with their religious beliefs.

The proposal was scaled back after a public outcry in which some companies threatened to pull business from Indiana.

Bierman says she was disappointed that Pence supported the law but believes he may have been trying to appease ultra-conservatives in his state.

As a boy, Pence was open and welcoming, she says. She recalls him befriending children at his school whose families were migrant workers and who sometimes struggled to fit in.

"I believe he accepts every person for who they are. That's the way he was in school.”

Without revealing her vote, Bierman says she is nonetheless excited about the prospect of the first female president.

"I am very excited about it as a woman, and our community of women is excited about a woman being ready to step forward.” But she is quick to add, "Certainly whoever is the president I will support."

Bierman no longer teaches, but says at age 73, she is still trying to make a difference. She is now a chaplain at a long-term care facility near Indianapolis.

Show Comments (
2
)
Comments are automatically closed two weeks after an article's initial publication. See our comments policy for more.
William Rydberg
4 years 5 months ago
In my opinion, its fair to ask a person who showcases their Catholicism as a reason to vote for them to justify their social justice positions. One thinks of TPP, prominent support for Planned Parenthood, etc.. This well known public record is hard to reconcile in my opinion. Nice to read that Sister at least tried. Just my opinion, in Christ,
Joe Mcmahon
4 years 5 months ago
Sometimes the frequent commentators on America's website resort to murky abbreviations: Who is TPP? Thanks.