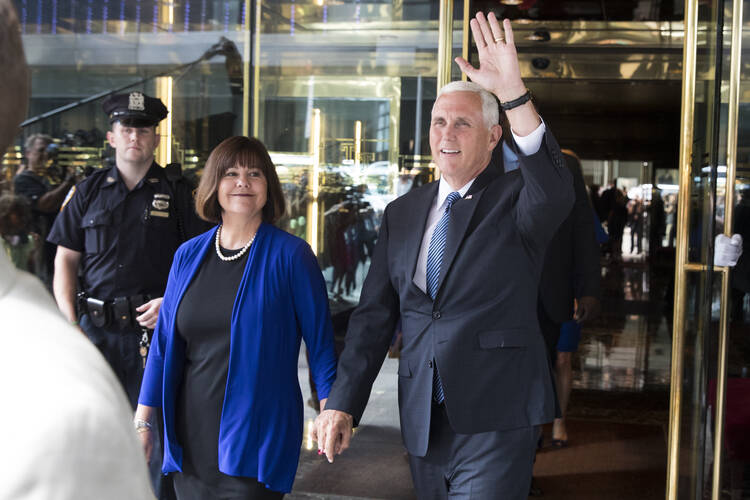 Late last year, Catholic Charities agencies in the Archdiocese of Indianapolis did something it has done thousands of times before in its 40-year history: It resettled a refugee family. Catholic Charities staff helped find housing, provided medical care, enrolled the family members in English classes and introduced them to the basics of living in a new culture.

Only this time, the resettlement took place under the glare of a national spotlight, the result of a public battle between the man just named to be Donald Trump’s running mate, Gov. Mike Pence of Indiana, and the archbishop of Indianapolis, Joseph Tobin.

Following terrorist attacks in Paris last November that left 130 people dead, about two dozen U.S. governors said that Syrian refugees were not welcome in their states. Catholic bishops from New Hampshire to New Mexico urged political leaders to resist giving into anti-refugee “hysteria,” as the bishop of Providence, R.I., put it, and to continue offering assistance to those who needed it.

Pence was one of those governors. He said on Nov. 16 that he felt the years-long federal screening process all refugees face when entering the United States was not working. He therefore directed state agencies to withhold aid to resettled Syrians.

“Indiana has a long tradition of opening our arms and homes to refugees from around the world, but, as governor, my first responsibility is to ensure the safety and security of all Hoosiers," he said at the time.

Because the refugee program is federal, state governors were not able to halt resettlement altogether. Instead, they could make it more difficult for agencies by denying state services, which is what Pence did.

But by the time Pence made his announcement, Catholic Charities of Indianapolis already had plans in place to resettle a Syrian family. The family, two parents and two children, had been living in Jordan for three years, undergoing security screening, and the agency wanted to move ahead with the resettlement.

So in a rare intervention, Tobin, the archbishop, trekked to the State House for a private meeting with Pence on Dec. 2. It was there that Pence pleaded with the archbishop not to resettle the family, again citing security concerns. Archbishop Tobin promised the governor that he would think about his request, away from the media spotlight, and that he would personally call Pence with his decision.

A spokesman for the archdiocese noted at the time that it was “highly unusual” for the archbishop to be involved in what was normally a routine Catholic Charities matter.

Six days after the meeting, Archbishop Tobin disclosed to the press that he had defied Pence’s request; the family had arrived in Indianapolis the night before and was being cared for by Catholic Charities.

Archbishop Tobin said in a statement that he had “listened to the governor’s concerns regarding security” and “prayerfully considered his request” not to resettle the family in Indiana, but had decided to move forward anyway.

Pence’s office responded, saying in a statement that while the governor holds Catholic Charities “in the highest esteem,” he nonetheless “respectfully disagrees with their decision to place a Syrian refugee family in Indiana at this time.”

And the ban on state funding to the families stood, the statement revealed, leaving Catholic Charities to foot the bills alone. Immigration and refugee advocates weren’t pleased. [Update, July 22: Fearing lawsuits, Pence relented, telling reporters that state aid could be used to support anyone legally in the state of Indiana.]

(Interestingly, Pence tweeted the day the news broke that the family had been resettled in Indianapolis that he was against a religious test for refugees, calling the proposal “offensive and unconstitutional,” a position that puts him at odds with his running mate.)

The resettlement saga helps to illuminate the complicated relationship Pence has with the Catholic Church.

According to an Indy Star profile of him, Pence was born and raised a Catholic, an upbringing where attending Mass and serving as altar boy was an important part of his life. Sometime during college, he began attending a non-denominational church, where he met his future wife. He now describes himself as, “a Christian, a conservative and a Republican,” in that order, and he’s also called himself, “a born-again, evangelical Catholic,” a phrase met with consternation by some on social media.

But Pence, long described as a culture warrior during his decade in Congress, nonetheless supports many issues important to some Catholics. According to reports, Trump picked Pence because he may allay concerns some conservatives have that the Manhattan real-estate mogul is not really one of them.

As a Congressman in 2003, Pence pushed for a constitutional amendment to define marriage as a union of one man and one woman, a proposal some Catholic bishops still support, even a year after the Supreme Court legalized same-sex marriage.

Later, in 2011, he advocated shutting down the federal government in order to defund Planned Parenthood, a rallying cry still common among some conservative lawmakers.

After he was sworn in as governor in 2013, following a campaign that largely eschewed social issues in favor of economic concerns, he pushed for the passage of a controversial bill that critics said would allow businesses to refuse service to L.G.B.T. people for religious reasons.

He eventually backtracked on the issue, after several big businesses threatened to boycott the state, to the consternation of some of his supporters.

Father Frank Pavone, head of Priests for Life, praised Pence and told America the two have worked together personally on abortion issues since Pence was first elected to Congress in 2000.

“Personally I know him to be a man who is not afraid to defend our values and to pay the price necessary to do it,” Pavone said of Pence. “We always knew we were going to have his strong support. He encouraged us, and we encouraged him.”

He said he understood that some conservatives were disappointed in Pence for backtracking on the religious liberty bill in light of pressure from the business community, but that he didn’t share those feelings.

“It’s always a disappointing thing when you can’t go full steam,” he said. “But I give him more credit for having taken the measure in the first place.”

Other Catholics are more skeptical of Pence, in part because of their opposition to Trump’s policy proposals.

The Franciscan Action Network was one of several Catholic organizations that signed a letter to lawmakers and governors last year urging them to welcome Syrian refugees. That group’s leader, Patrick Carolan, told America that he takes issue with Pence for his refusal to support refugees, but even more so because of the governor’s history of support for the coal industry.

Miguel Diaz, a former U.S. ambassador to the Holy See under President Barack Obama and a professor of theology of Loyola University Chicago, told America that he, too, believes Trump’s choice could assuage some Catholic voters concerned that Trump isn’t sincere in his opposition to abortion. But he said that Pence’s views on L.G.B.T. issues may turn off other Catholics when they head to the polls.

“Trump and Pence represent a ticket that is frozen in time, out of touch with the signs of the times,” he said. “At a time when Pope Francis has challenged a ‘globalization of indifference,’ Trump has selected a candidate who has demonstrated a lack of sensitivity on a number of issues that have affected various communities in our nation.”

And though Catholics make up a sizable chunk of the electorate, it’s likely Trump was far more concerned with how his choice would be perceived by evangelical voters. After all, a recent poll found that most Catholics are gravitating toward Clinton, while Trump is dominating among with white evangelicals.

Getting those voters to the polls may be the best chance he has of winning the White House, which explains why evangelical leaders such as Jerry Falwell Jr., were among the first to know Trump’s decision to pick Mike Pence.

Michael J. O'Loughlin is the national correspondent for America and author of The Tweetable Pope: Spiritual Revolution in 140 Characters.