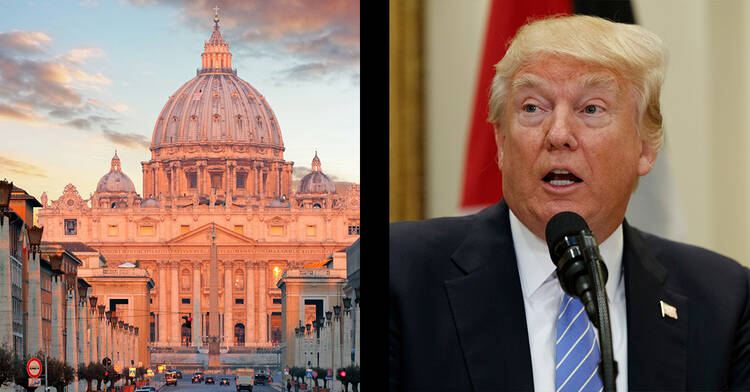 President Donald Trump's first foreign trip will include stops in Israel, the Vatican and Saudi Arabia before visits to NATO and a summit in Italy.

Trump is expected to take his first overseas trip as president later this month with the multi-stop tour, two White House officials said. The officials spoke on condition of anonymity ahead of a formal announcement later Thursday.

America's Gerard O'Connell reports that Pope Francis will receive President Trump at 8.30 a.m. on May 24 and afterwards he will meet with high-ranking Vatican officials.

The announcement follows Trump's meeting on Wednesday with Palestinian leader Mahmoud Abbas (mahk-MOOD' ah-BAHS') and Trump's vows to mediate peace between Israel and Palestine. Trump also met with Catholic cardinals earlier Thursday ahead of his trip to the Vatican.

The White House had said previously that Trump would travel to Belgium and Italy for the G7 summit before Memorial Day.

The trips were first reported by Politico.

This story may be updated.

Tough balancing trick. Pope Francis may try to coax President Trump to be more humane, but Trump will try to use Pope for credibility.

A humble, gracious, and forgiving Pope....a pompous, boisterous, and unforgiving head of state. An unlikely pair but politics creates such pairings often.

A great photo op for the latter.

Maybe Trump will school the Pope on economics and climate change. What works and doesn't work.

I say this in jest since I doubt that nothing but platitudes will be exchanged. Trump is visiting three religious centers to show his support for religion whether real or not.

The big show event will be Jerusalem for the 50th anniversary of the reuniting of the city and a speech at Masada.