Trump and the U.S. Catholic Church: The First 100 Days 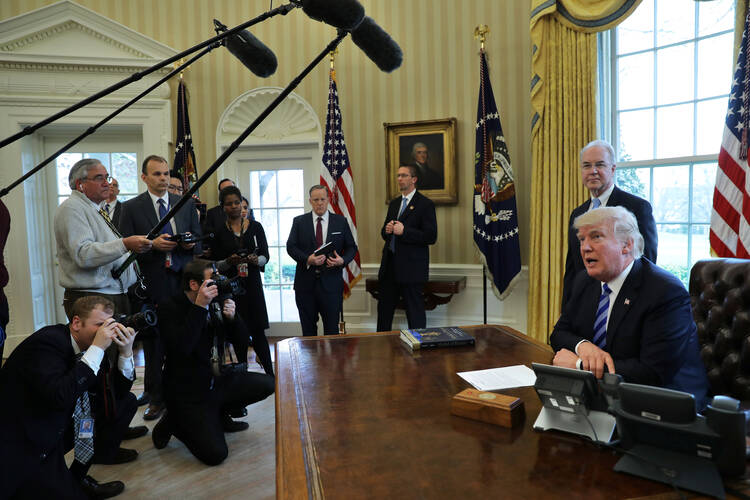 U.S. President Donald Trump talks to journalists in the Oval Office at the White House on March 24 after the American Health Care Act was pulled before a vote. (CNS photo/Carlos Barria, Reuters)

President Trump’s first 100 days come to a bracing conclusion on April 29. The Trump administration has led the nation on something of a white-knuckle ride right from the get-go, provoking gray hair among civil libertarians and advocates for foreign aid, human rights and immigrants. Some of the president’s back-and-forth decisions on North Korea, Syria and Nafta have likewise worried economic, security and foreign policy experts from both the left and the right.

Predictably Mr. Trump has also clashed with the Catholic Church and the U.S. Conference of Catholic Bishops on many of the policies he has promoted during his first 100 days. His decision to move ahead with the Keystone and Dakota Access pipelines and roll back Obama-era efforts to respond to climate change have been challenged by Catholic environmental groups. The president’s positions on immigration and refugee resettlement have similarly been criticized by Catholic advocates. But clashes with the U.S. bishops directly have been most acute over the treatment of refugees and undocumented migrants in the United States and efforts to put an end to a number of reforms and initiatives launched under the Obama administration’s Affordable Care Act.

The bishops have been put in the odd position over the last few months of defending the Affordable Care Act after spending a good number of the Obama years criticizing Obamacare. They had objected to the A.C.A., arguing that it served indirectly to fund abortions (via insurance subsidies) and that the religious exemption from contraception mandates was too narrowly crafted.

On the plus column for the president, the bishops did enthusiastically support his decision to restore the Mexico City Policy, which prohibits U.S. aid being used to promote or subsidize abortion overseas. They called the executive order “a welcome step toward restoring and enforcing important federal policies that respect the most fundamental human right—the right to life—as well as the long-standing, bi-partisan consensus against forcing Americans to participate in the violent act of abortion."

In late March the bishops also endorsed an effort to redirect family planning funding away from abortion providers like Planned Parenthood to community health centers that could offer comprehensive care. In April the conference offered strong support for the Child Welfare Provider Inclusion Act of 2017. That measure seeks to prevent the federal government and states receiving federal funds for child welfare services “from taking adverse action against a provider that, for religious or moral reasons, declines to provide a child welfare social service.”

But the president and the bishops have clashed far more often on federal policy, especially as many of the policy shifts from Obama administration policies came in the form of executive orders from the White House. Just days after his inauguration, Mr. Trump’s efforts to halt refugee resettlement and freeze visas from a number of Muslim-majority nations (still tied up for the most part in federal courts) provoked early criticism from church leaders.

Anxiety on Refugees and Immigrants

The bishops, noting that the executive order had “generated fear and untold anxiety among refugees, immigrants, and others throughout the faith community in the United States,” committed the church to stand “in solidarity again with those affected by this order, especially our Muslim sisters and brothers.”

They added, “We also express our firm resolution that the Order's stated preference for ‘religious minorities’ should be applied to protect not only Christians where they are a minority, but all religious minorities who suffer persecution, which includes Yazidis, Shia Muslims in majority Sunni areas, and vice versa.”

“Instead of building walls, my brother bishops and I will continue to follow the example of Pope Francis. We will ‘look to build bridges between people, bridges that allow us to break down the walls of exclusion and exploitation.’”

Cardinal Daniel N. DiNardo of Galveston-Houston, president of the U.S.C.C.B., and Archbishop José H. Gomez of Los Angeles, the conference’s vice president, added an additional reflection on the issue: “The refugees fleeing from ISIS and other extremists are sacrificing all they have in the name of peace and freedom.... Many are families, no different from yours or mine, seeking safety and security for their children. Our nation should welcome them as allies in a common fight against evil.” (A rewrite of the same order in March, meant to overcome a federal court decision against the original order, was similarly criticized by the conference.)

Just days earlier the bishops had warned members of Congress that a repeal of Obamacare should not be considered without a replacement plan at the ready. A number of critical statements followed in February and March as the G.O.P. effort to find an internal compromise on how best to repeal and replace Obamacare escalated and foundered.

In an April statement, the bishops called it “deeply disappointing” that in modifying the American Health Care Act to again attempt a vote, “proponents of the bill left in place its serious flaws, including unacceptable modifications to Medicaid that will endanger coverage and affordability for millions of people.”

They said the act included some praiseworthy features, “among them restricting funding which flows to abortion providers and prohibiting federal funding for abortion or the purchase of plans that cover it.” But, they concluded, “the AHCA, as it now stands, creates new and grave challenges for poor and vulnerable people, including immigrants. The House must not pass the legislation as it is. Members should insist on changes, especially for the sake of those who are struggling in our communities."

The Obamacare repeal and replace effort was excoriated by Carol Keehan, D.C., president and chief executive officer of the Catholic Health Association of the United States. She called the latest G.O.P. proposals “disastrous” and a “giant step backward.”

Divided by a Wall

In late January the president issued an executive order expediting his oft-promised wall along the southern border with Mexico and expanding immigration enforcement capacity.

On Jan. 25, a statement from the bishop’s conference said the proposed wall “will put immigrant lives needlessly in harm's way,” adding, “Construction of such a wall will only make migrants, especially vulnerable women and children, more susceptible to traffickers and smugglers.” “Instead of building walls,” said Bishop Joe Vasquez of Austin, chair of the Committee of Migration, “my brother bishops and I will continue to follow the example of Pope Francis. We will ‘look to build bridges between people, bridges that allow us to break down the walls of exclusion and exploitation.’”

In the same statement, the bishops criticized plans to increase immigrant detention space and expand immigration enforcement activities as “alarming.”

“It will tear families apart and spark fear and panic in communities,” Bishop Vasquez said on behalf of the conference.

Just a day later, the bishops and the president were at it again, this time over the Trump administration’s plans to punish so-called sanctuary cities, municipalities that have committed themselves to noncooperation with the federal government in the deportation efforts against undocumented U.S. residents. “We believe in the inherent value of subsidiarity,” Bishop Vasquez wrote, again representing the conference, “and as spiritual leaders who minister to and live every day in our communities, we recognize the importance of relationships between local law enforcement and the people of the communities that they police.… We know that cooperative relationships between law enforcement and immigrant communities are vital. I fear that this Executive Order may be injurious to that vital necessity.”

They returned to the theme in February in a sharp criticism of a changing mandate toward more aggressive immigration enforcement from the Department of Homeland Security. “The DHS memoranda,” the bishops charged, “eliminates important protections for vulnerable populations, including unaccompanied children and asylum seekers. They greatly expand the militarization of the U.S./Mexico border. Taken together, these memoranda constitute the establishment of a large-scale enforcement system that targets virtually all undocumented migrants as 'priorities' for deportation, thus prioritizing no one.”

Beyond treatment of migrants and refugees and health care, the bishops have also resisted the administration on other fronts. In February, for example, the bishops expressed “concern and disappointment” with Mr. Trump's decision to retain Obama-era orders prohibiting federal government contractors “from undefined ‘sexual orientation’ and ‘gender identity’ discrimination” and forbidding gender identity discrimination in the employment of federal employees.

On the environment, the bishops joined Sean Callahan, president of Catholic Relief Services, in a February letter urging the administration to do more “to care for creation both domestically and globally,” specifically calling for continued U.S. support of the Paris climate agreement as well as the Green Climate Fund, which provides poorer nations with resources to adapt to and mitigate changing climate realities.

Kevin Clarke is America's chief correspondent and the author of Oscar Romero: Love Must Win out (Liturgical Press).

I have numerous reservations regarding the various positions taken by USA bishops on the many issues noted in this article. My greatest reservation for the moment, however, has more to do with the teaching function of the bishops rather than any of the specific stances that they have taken.

Why do I have to read a national Catholic magazine and not my local Catholic diocesan newspaper to learn about the bishops' positions? Regarding the Obamacare mandates about abortion and/or contraceptives, the USA bishops started a "freedom of religion" campaign. Coverage of the issues was vigorous and frequent.

Are any of the issues for which the bishops are currently allegedly at odds with Trump policies equally morally offensive to us? If so, why the silence? And if not, then why not? At the least, the attempted ban on various religious and cultural groups as refugees and immigrants is a frightening violation of the "freedom of religion" to which the bishops seem so committed. I'd like to hear from the bishops on that topic vigorously and frequently.

I find it interesting that so many, including the Catholic bishops, who incessantly criticized what President Obama did now find themselves defending what they formerly criticized. Perhaps they should have given more thought to the idea that it is far harder to make things better than it is to make them worse. The bishops whined and complained that the Affordable Care Act covered contraception but now find that covering contraception is much less of a problem than having no healthcare coverage at all. Those of us who have to worry about having healthcare coverage knew that all along.

Are all the complaints about the recommended changes in the Republican healthcare plan fake news? From what I understand there is no chance that citizens will not have access to insurance in the Republican plan. They can choose to not have insurance but they will not be denied insurance. And the cost should be less than now.

People with pre-existing conditions are to be covered.

The purpose of the Republican plan is to lower costs and as such I have a hard time understanding why anyone would criticize that.