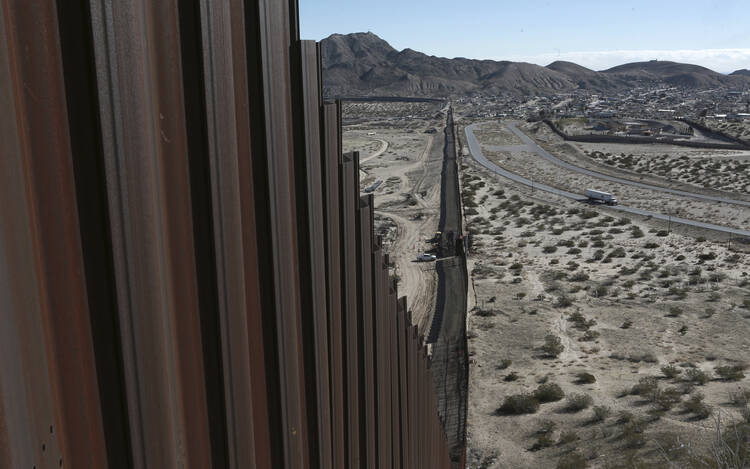 In January 2017, a truck on the Mexican side passes near the Mexico-U.S. border fence that separates the towns of Anapra, Mexico, and Sunland Park, New Mexico. (AP Photo/Christian Torres, File)

Mexican President Enrique Peña Nieto looked satisfied on March 21, when, surrounded by the usual pack of party dignitaries, he signed into law a bill that is supposed to help young Mexicans deported from the United States have better access to the country’s education system.

“With these actions,” the president said, “we send a message of unity, certainty and faith in Mexicans living abroad.”

The new education law makes it easier for deportees to validate the level of education they attained in the United States, helps them improve their Spanish and sets up information points at border stations for deported pupils. It has been described by Mexican media as “pro-Dreamer,” referencing U.S. “Dreamers,” young adults who came of age in the United States after they were brought into the country without documentation by their parents.

Many had been able to acquire protected status under the Obama administration’s Deferred Action for Childhood Arrivals program, allowing them to find jobs or continue their education. Now many Dreamers wonder if they face deportation.

The education plan for deportees represents one of the first attempts by the Mexican government to pushback against the policies of the new occupant of the White House. In another move to counter policy shifts north of the border, Mr. Peña Nieto announced in January that he would strengthen the 50 Mexican consulates in the United States.

The education plan for deportees represents one of the first attempts by the Mexican government to pushback against the policies of the new occupant of the White House.

Adding one billion pesos (approximately $20 million) to the consulate service’s budget, the president said that he hoped to turn the diplomatic posts into “authentic defenders” of Mexicans in the United States, providing protection and legal support to undocumented compatriots north of the border.

Two months have passed since President Donald J. Trump assumed office, and the new U.S. president has wasted little time in souring U.S. relations with Mexico. His executive order to begin constructing a border wall, ambitions to renegotiate the North American Free Trade Agreement and moves to more aggressively enforce U.S. immigration laws have contributed to a deterioration of the U.S. relationship with Mexico in ways not seen in generations.

Mexico had been a favorite target of Mr. Trump’s during his presidential campaign. At home, Mr. Peña Nieto faced heavy criticism for being too passive and soft on Mr. Trump, culminating in a widely criticized visit of the then-Republican candidate to Mexico City.

The Mexican political world “has definitely been very angered by Trump,” said Genaro Lozano, a political commentator for the Mexico City-based Reforma newspaper. “The relationship with the U.S. had improved when Obama was president, but it’s now in a very bad place.”

It is so bad, in fact, that some commentators say the United States and its southern neighbor have not gotten along this poorly since both countries were at war in the 19th century.

Mr. Peña Nieto’s countermeasures came after he canceled a planned visit to the White House in January over Mr. Trump’s decree to construct his oft-promised border wall. That same month, Secretary of Economy Ildefonso Guajardo threatened that Mexico might leave Nafta altogether if future negotiations about the trade deal would cause his country to lose benefits. And in late February, Secretary of Foreign Affairs Luis Videgaray rejected a U.S. Department of Homeland Security plan to deport undocumented migrants to Mexico, regardless of their nationality.

But despite the tough talk, education law and extra money for diplomats, many critics say the response from Mexico is still not nearly enough to mitigate the firestorm of hostile decrees and policies emanating from the White House.

“To say the Mexican government is being more assertive is very generous,” said Rodolfo Soriano-Nuñez, a sociologist based in Mexico City. “Its response has been late, weak and insufficient.”

According to critics like Mr. Soriano, the education law, for example, fails on a very practical level: It ignores the magnitude of the problems deported Mexicans who spent most of their lives in the United States will have integrating into Mexican society.

“What the Mexican education secretariat offers is validating primary education, but that’s ridiculous,” Mr. Soriano-Nuñez complained. “What’s most needed is recognition of high school and college education. But if you’re deported, you don’t have a chance to get your academic documents in order.

“In other words: This policy offers no real help.”

Practically speaking, the Peña Nieto administration can do little to counter the proposed border wall or to restrain Mr. Trump’s drive to renegotiate Nafta. Construction of the wall will not begin until the U.S. Congress approves its multi-billion dollar price tag, and negotiations to change Nafta are not expected to begin until the second half of this year.

“With regard to Nafta and free trade, the Mexican government appears to have taken a sort of wait-and-see attitude, hoping for the storm to blow over,” said Javier Urbano, a professor of migration studies and international relations at the Iberoamericana University in Mexico City. “The entire strategy appears to be focused on the fear of change to the free trade agreement. The government wants to maintain the status quo.”

But on migration issues the Peña Nieto administration could move more aggressively against the Trump White House. Instead, according to Mr. Urbano, the Mexican government appears to be more concerned about the looming Nafta negotiations. That is a mistake, he believes, because migration is the issue that in the short run could cause the greatest humanitarian challenges in Mexico.

“The Mexican government’s discourse is very monothematic,” Mr. Urbano said. “When it comes to migration, the focus is no longer on solving humanitarian issues for Mexicans living abroad, but dealing with deportees. But that reaction comes very late.” Under the Obama administration “there have already been deportations on a massive scale for years.”

Some critics attribute the Mexican government’s weak response to Mr. Trump to its own severely diminished popularity. Mr. Peña Nieto, constitutionally barred from reelection, is the most unpopular Mexican president since the early 1990s. Plagued by corruption scandals, rising criminal violence and a disastrous rise in gasoline prices early this year that caused widespread unrest, he has seen his popularity drop to below 30 points.

With elections scheduled for mid-2018, it will be less than a year until Mexican politics accelerate into full campaign mode, Mr. Urbano says.

“The profile of the government has been lowered, they have very little room to maneuver anymore,” he says. “The way I see it, the government is simply hoping to sit it out, hoping for the Trump-administration to be worn out” by the election.

This is an incredible article. Mexico is the bad guy here, not Trump or the United States. What the author and Nieto are saying is that Mexico is such a dysfunctional country that they have to get rid of as many as possible and at the same time try to suck as much money as possible out of their successful northern neighbor.

Let me rewrite something from the article.

American President Donald Trump looked satisfied on March 21, when, surrounded by the usual pack of party dignitaries, he signed into law a bill that is supposed to help young Americans deported from Mexico and other Latin American countries have better access to the country’s education system.

“With these actions,” the president said, “we send a message of unity, certainty and faith to Americans living abroad.”

Could you imagine such comments by the President of the US. This is the farce we face with such disingenuous actions by Mexico. Mexico not only encourages that their citizen leave but they also encourage and facilitate people from other Central American countries in their trek north to the US border. Of which thousands have died.

Yes, Mexico is the bad guy in all this and anyone else who encourages that people try to enter this country illegally

I must first make clear I was adamantly opposed to the election of Mr. Trump, and am baffled that half of Catholics helped put such a man in office.

That said, although Trump makes his points quite poorly, he does have a point, countries have to have borders or they aren't countries. We should not forget that Mr. Obama exported substantial numbers of illegal aliens.

The border wall may be a huge tactical mistake, a waste of resources, but there's nothing evil about any country building a wall on what is clearly it's own territory.

How many new people do we want to let in to America? That's a reasonable discussion, and I don't claim to know the right answer. We might however keep in mind that the population of the US has already doubled in my lifetime.

How many illegal aliens do we want in America? The answer is zero. We have enough law breakers of our own, we don't need to import any more.

Mexicans seem like good people to me, so assuming they come in legal, bring them on.