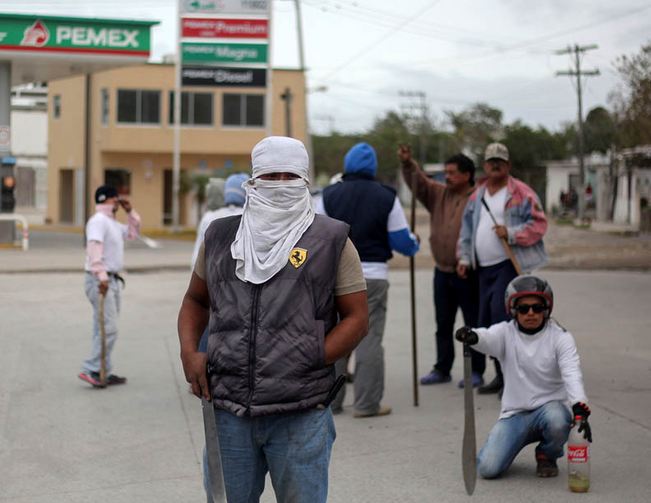 Social unrest swept across Mexico in early January as protests over a hike in gasoline prices escalated into acts of looting, riots and blockades of highways and petrol stations. Hundreds of people were arrested after ransacking stores and clashing with police on Jan. 5.

The unrest first erupted on New Year’s Day, after the government announced a sudden increase in gasoline prices of up to 20 percent. Popularly called “gasolinazo,” the price hike is a consequence of the government abandoning a decades-old scheme of deep gasoline and diesel subsidies as part of an energy reform package. But the gasolinazo coincided with rising global oil prices and it came just as gasoline scarcity struck stations across the country.

The sudden hike brought the anger and frustration over fuel scarcity to a boiling point. Angry protesters began blocking access to service stations, expressways and thoroughfares in dozens of major cities across the country. Lootings and gas theft soon followed. More than a thousand stores have been ransacked, causing millions of dollars in damages.

At least two looters in Veracruz state and a police officer who attempted to prevent gas theft in Mexico City died in the mayhem. As panic over the possibility of violence spread on social media in the capital, the army began patrolling certain neighborhoods on Jan. 4 to maintain order.

“I know there is much annoyance and anger because of this situation. Those are feelings I understand,” Mr. Peña Nieto said on Jan. 5 in his New Year’s address to the nation. “But trying to maintain the artificial price of gasoline would have forced us to cut social programs, raise taxes or increase the country’s debt, placing at risk the stability of the economy as a whole.”

But Mexicans have not forgotten that they were promised cheaper gas and electricity prices. The exact opposite is happening. Other basic goods and services, such as food and public transportation, are also expected to become more expensive this year.

The protests have energized the leaders of grassroots and social movements, who hope to channel the popular anger into achieving political change. Interviewed on Jan. 6 by the website SinEmbargo.com, Bishop Raúl Vera of Saltillo called for a “new social pact” in Mexico.

“We first need a real political pact that would guarantee to the nation that it would be a truly representative democracy, because right now it’s not even that,” Bishop Vera said. “How are the thugs who approved the energy reform going to represent the country?”