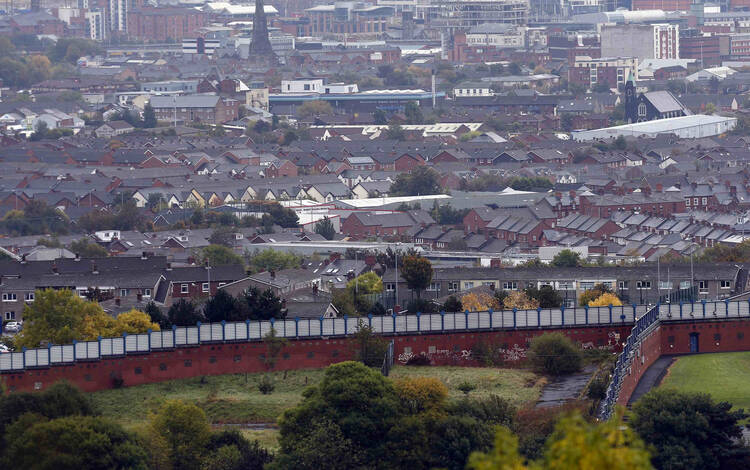 It has been over 10 years since the Irish bishops’ last “ad limina” visit to Rome, a trip that is usually scheduled every five years to meet with the pope and confer with departments within the Holy See. In that time, “a lot has changed for us,” says Archbishop Eamon Martin of Armagh, who led this year’s visit as head of the Catholic Church in Ireland. Archbishop Martin was not at the last visit—with Pope Benedict XVI in 2006—and neither were over half of the bishops who traveled to Rome with him this time.

But while they brought new perspectives to their two-hour audience with Pope Francis on Jan. 20, a new report into institutional sexual abuse reminded those present of a lingering legacy. The historical institutional abuse inquiry report, which investigated child mistreatment across Northern Ireland, accused the Catholic hierarchy of ignoring repeated warnings about the notorious pedophile priest Brendan Smyth. Although Archbishop Martin had not read the report (it was being released as the meeting was taking place), he had “a fair idea” of what it would say.

“I raised the issue with Pope Francis and I felt it was important for those victims that I did that,” he says. He later released a statement apologizing “unreservedly" to Father Smyth’s victims.

The issue of sexual abuse was a key topic during the visit in 2006 as well. Pope Benedict then commissioned the bishops to establish the truth of the abuse, put in place procedures to prevent it from happening again, submit to the demands of justice and to help bring healing to those who have suffered abuse. Archbishop Martin says the church has committed “huge resources” to fulfilling those requests, including the creation of new procedures to safeguard children and providing “healing services” for victims.

Pope Francis had an “open attitude” and listened intently with the help of an interpreter during their meeting, he reports. The bishops spoke about declining congregation numbers and vocations to religious life.

“There are increased pressures on priests because they have to deal with larger numbers of people,” says Archbishop Martin, although he points to the increasing role of lay people as a positive. “Ireland had become overly ‘clericalized.’ The priest did everything and everyone was serving the priest. Now we have to get into a culture where there are few religious people, and lay people are called forward for roles in decision-making.

“The church is in a different space,” says Archbishop Martin. “We are one of many players speaking in the public square. We must be more invitational, using a ministry of presence, gently explaining the message of the church and inviting people in. The church is called to work with people where they’re at.”

Family life has been challenged in the last decade, according to Archbishop Martin, with the economic recession in Ireland bringing stress and returning the prospect of emigration into many homes. The definition of family has also been altered, after Ireland voted in same-sex marriage in 2015.

In schools, the debate over church patronage has become a focus in the push to create plurality. The majority of state-run schools in the Irish Republic are under the patronage of the Catholic Church, with a few schools that are particularly in demand giving preference of admission to children who have been baptized.

The archbishop of Dublin, Diarmuid Martin, has been critical of the practice, and Archbishop Eamon Martin says the church is open to divesting, that is, surrendering control of schools to secular authority. “However, on the ground, a lot of communities are attached to the Catholic ethos of schools and hold it in high regard, so it’s often difficult to get schools and patrons on board with divesting,” he says.

In Archbishop Martin’s own Archdiocese of Armagh, communities are facing a unique set of challenges. Sixty percent of people in the archdiocese live in Northern Ireland and 40 percent in the republic. The United Kingdom’s decision to leave the European Union—popularly known as “Brexit”—has created considerable uncertainty. The people of Northern Ireland voted against the idea of withdrawing from the union. The Irish Republic would remain part of the European community after the Brexit process is finished.

“We’re back to talking about borders between the north and south and restrictions on the movement of goods and a fear among some people of a restriction on a movement of people,” the archbishop says, “despite the assurances of Prime Minister Teresa May and Ireland’s Taoiseach Enda Kenny and other political leaders that this won’t happen.”

The uncertainty in Northern Ireland has been worsened by the collapse of the power-sharing government in the aftermath of an energy scheme scandal. Archbishop Martin released a statement asking politicians to realize the importance of stability.

“I was disappointed because the politicians were at last getting down to issues like the economy, health and creating brighter future. There’s a whole generation that has grown up without violence, so it was a heartfelt plea not to let the progress slip away.”

He adds, “You cannot underestimate the importance of the Good Friday Agreement. People around the world look to Northern Ireland as an example of people sorting out their differences. But here is a legacy of hurt and a deep legacy of suffering and we all need to play a part to work through it. We cannot leave a vacuum.”

The next time the Irish bishops gather to meet Pope Francis it will be in Ireland in 2018 for the World Meeting of Families. It will be the first papal visit since Pope John Paul II in 1979, whose trip came as the Troubles raged in Northern Ireland. Much has changed since then, for both the church and Ireland, although violence has still not ended entirely.

“Just last week a police officer was shot by dissident republicans in Belfast,” Archbishop Martin notes. “But what gives me consolation is that politicians from all sides and church leaders from all sides were condemning it. We won’t let go of the progress we’ve made.”