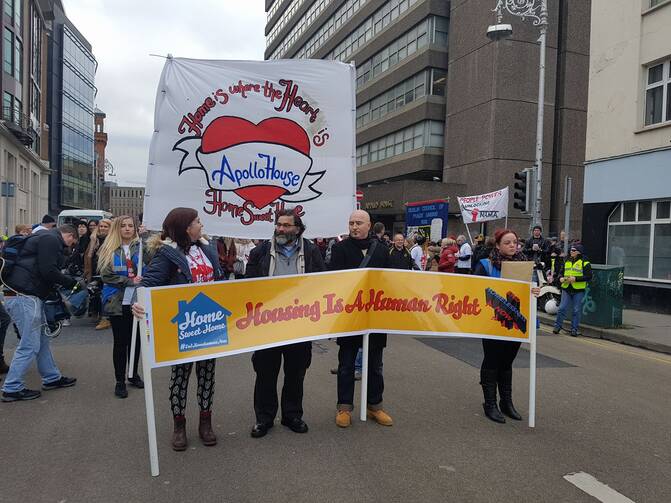 Just before Christmas, a group of “concerned citizens” broke into an abandoned civil service building, the Apollo House, in the center of Dublin and opened it up to the city’s “rough sleepers,” as homeless people are described in Ireland. It was an “act of disobedience,” according to musician Glen Hansard, one of the high profile participants of the occupation of the building, and a reaction to the city’s worsening homeless problems. The group, which included actors, trade unionists and members of housing charities, calls itself “Home Sweet Home.”

Within days, the informal effort was overwhelmed by donations. People showed up at the metal gates of the government building offering clothing, food and their support. Inside, former offices were filled with IKEA furniture, turning derelict spaces into private bedrooms.

Musicians like Mr. Hansard and Damien Dempsey performed impromptu concerts on the roof, as the number of homeless people being housed grew from six to 40. A high court order followed. The squatters were allowed to stay over Christmas, the judge said, but the judge gave the group until Jan. 11 to leave and said the building’s scheduled demolition would go ahead.

The illegal occupation came at the end of a year during which Ireland has seen record numbers forced onto the streets. An acute urban housing shortage, brought on by the slowdown in building during the recession, has contributed to soaring rents.

Meanwhile, wages have stagnated, causing a wave of industrial action among public and private sector workers. More than 7,000 people are now officially homeless in Ireland, while 20,000 buildings lie empty in Dublin.

Apollo House is one of those empty buildings. It is under the control of the National Assets Management Agency. Formed in 2009 to address the crisis in Ireland’s banks, N.A.M.A. acquired property development loans from struggling banks with the purpose of selling the buildings off over time.

The agency has become synonymous with big banks, greedy property developers and opportunistic vulture funds. Since the crash, these funds have snapped up €200 billion worth of Irish property, many of it at discounted rates, through N.A.M.A.

On the night Apollo House was taken over, director Jim Sheridan summed up the collective public anger: “In these cruel times of austerity, of banking crisis, of people paying debt, can we not just bail out someone who is in the gutter? Can we end homelessness?"

The minister for housing, Simon Coveney, called for an end to the occupation, and said there were already enough emergency beds available in Dublin for the rough sleepers. The chief executive of Dublin City Council, Owen Keegan, criticized Irish people for being “suckers for celebrity endorsements.”

He complained, “It’s interesting that in the two weeks before Apollo House, three purpose-built refurbished hostels were opened and they didn’t get a fraction of the publicity.”

The Rev. Peter McVerry, whose charity runs 15 hostels for homeless, has said hostels are inadequate and unsuitable. Hostels require people to leave by 10 a.m., forcing them to wander the streets, and are often filled with social problems. He points to the 200 apartments that his charity has placed people in as the ideal solution, and would like to see the use of hostels phased out. People need a sense of place, he says, and a key to their own door. He says while Apollo House has raised awareness, but it is not the solution.

Some inside Apollo House have a different perspective. One of the volunteers, Tom, was homeless for 18 months before he was recently housed by a charity. He says there’s a sense of community in the building, unlike the hostels, and the strict ban on drink and drugs adds a feeling of safety. Some of those staying are former addicts, while others still are. Some, like Marcus, 25, have never abused drink or drugs. He became homeless after losing work and becoming estranged from his family. He moved into Apollo House with his girlfriend, Cheryl, and began working with the maintenance volunteers in the building. One of the volunteers recognized his enthusiasm and, through a friend of a friend, got him a plumbing apprenticeship. He begins next week.

It seems that any threat of a standoff between Apollo House and N.A.M.A. is unlikely. Home Sweet Home met on Jan. 6 with the minister for housing to discuss their demands, which include opening more N.A.M.A. buildings for homeless people, albeit in a more controlled, planned manner, and offering emergency accommodation on a six-month basis. Apollo House will be evacuated by Jan. 11, and the residents will be moved back to emergency accommodation. The building will eventually be knocked down and replaced with a new building with a new name.

The occupation of Apollo House came in the dying days of Ireland’s centenary year, when the country looked back at the first steps towards independence. For many, Apollo House felt like an act of self determination, one that reflected the Republic of Ireland’s founding ideals of equal rights for all its citizens.

As the Irish president Michael D. Higgins put it, the occupation showed that “consciousness has increased” along with the willingness of people to give of themselves. “Lurking in the background is the idea of...if you are asked to make a choice between what are near absolute rights of property that are being claimed and the immediate necessary rights of people to live….I think people are trying their best.”