100 religious experts are writing letters to Trump. Here's what they're saying. 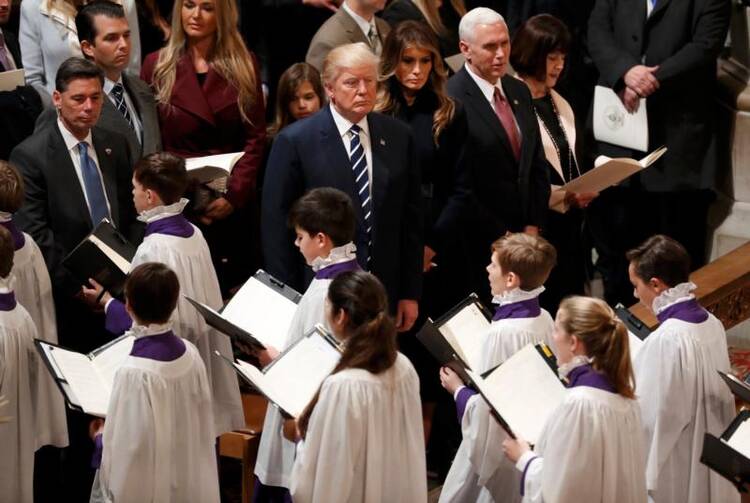 Catholic scholars and religious experts across the country are writing letters to the Trump administration detailing how the new government should uphold what they see as core American values. The “100 Days. 100 Letters.” campaign by American Values Religious Voices features a new letter each day from Christian, Muslim, Buddhist, Jewish, Hindu and Sikh scholars.

Dr. Michael Peppard, an associate professor of theology at Fordham University, offered a Catholic perspective on religious liberty. He was troubled by President Donald J. Trump’s call during his campaign for a Muslim registry, he said, which is why he wrote about the American tradition of not keeping records of religious affiliations.

“The story of America’s religious diversity should always be written in our history books, but not in a census or registry,” Peppard wrote. “An individual’s religion is not the government’s business.”

The likelihood of a Muslim registry is even greater after the immigration and travel restrictions ordered by President Trump, Peppard told America. Catholics have fine-tuned their arguments in support of religious liberty in recent years with disputes relating to health care and same-sex marriage, he said, adding that the same principles should be advocated on behalf of Muslims because it is “central to what it means to be an American and what it means to be an American Catholic.”

The diversity of writers for “100 Days. 100 Letters.” reflects the diversity of the United States, said Rabbi Dr. Andrea Weiss, campaign founder and associate professor of the Bible at the Hebrew Union College–Jewish Institute of Religion. Core American values felt shaky during the presidential campaign and religious scholars could provide an important perspective, she said.

“I felt that people in this field had a unique voice for this time,” Weiss said. “If we could amplify all of these 100 individual voices, we could make one collective voice.”

Weiss collected the names of scholars through her networks and various conferences. Each writer was asked to interpret the current climate of the country from their religious background. Letter-writing offers a direct way of communicating with the new administration, as well as a wider audience of readers, Weiss said. She reported that more than 1,500 people subscribe to the campaign’s daily updates.

Mark Smith, advisory committee member and professor at Princeton Theological Seminary, said the campaign is not partisan. The diversity of writers and topics shows a willingness to speak across divides, which the organization hopes will engage the Trump administration, he said.

Read the rest of the letters here.

First they should tell him to shut up, sit down, and listen to the gospel and moral proclamations of just about every religion on earth. There is no justification for bigotry, racism, misogyny, sexual predators, or setting the needy in beggar status as the undeserving vassals of the rich. If Trump is a believer as he claims, he needs to immediately clean up his act. For what does it profit a man to gain the whole world and yet lose his soul?

RE: "Catholic scholars and religious experts across the country are writing letters to the Trump administration"

Three are named. Who are the others?