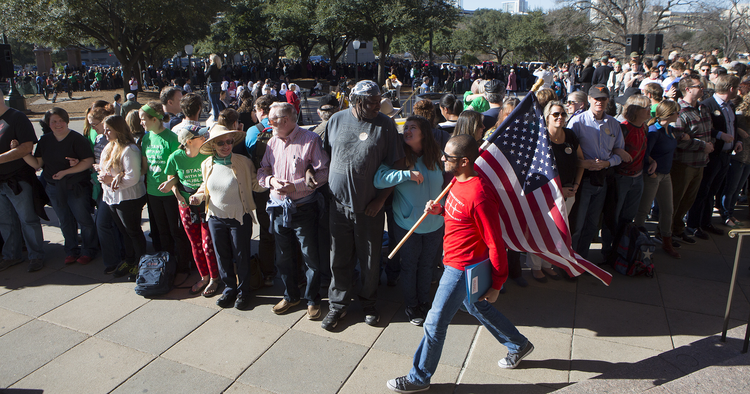 Ahmed El Shenawy carries the American Flag around a wall of humans intended to protect the stage on the steps of the capitol for Texas Muslim Capitol Day, on Jan. 31, 2017, at the Texas Capitol in Austin, Texas. (AP Photo/Stephen Spillman)

President Donald Trump's promised crackdown on "sanctuary cities" has triggered divergent actions from blue and red states, revealing the deep national divide on immigration as some move to follow his order and others break with the U.S. government to protect immigrants in the country illegally.

California, the nation's largest state, is pushing for a statewide sanctuary that would prohibit law enforcement from cooperating with federal immigration authorities, while a fellow U.S.-Mexico border state, Texas, is seeking to withhold funding from cities with the policies.

Trump's recent executive orders threatening to withhold federal funding from communities with sanctuary policies and calling for a border wall have produced widespread protests and fears that more immigration restrictions are in the future. The president's supporters have hailed the efforts.

Cities have mostly taken up sanctuary laws. There's no official definition, but often they tell police not to inquire about the immigration status of those they arrest or they decline requests from immigration officials to keep defendants in custody while they await deportation.

But liberal states like California would not be the first to block police from enforcing federal immigration law. Oregon pioneered statewide sanctuary in a 1987 law, when immigrant workers and their families were sometimes housed in appalling conditions despite their importance to agricultural profits.

Oregon Gov. Kate Brown said she will enforce that law.

San Francisco reaffirmed its commitment to sanctuary polices by suing Trump on Tuesday, the same day California state senators advanced legislation that would provide money for lawyers for immigrants facing deportation and hamper any attempt to create a Muslim registry.

The state is home to an estimated 2.3 million immigrants in the country illegally.

Some California Republicans fought back. State Sen. Jeff Stone voted against the measure, saying, "I think this bill is making it that much more difficult for the federal authorities to get the most dangerous criminals that we want to deport to keep our communities safe."

He instructed lawmakers to send him a bill by June that punishes local governments that don't cooperate with federal immigration authorities. Abbott wants to withhold taxpayer money to cities that don't detain immigrants and to remove locally elected officials if they don't comply.

Travis County Sheriff Sally Hernandez, who runs the jails in the liberal enclave of Austin, plans this week to stop honoring all federal immigration requests to detain suspects and only comply with requests to hold those accused of murder, aggravated sexual assault and human trafficking. Abbott responded by blocking $1.5 million in criminal justice grants to the county.

Idaho also is moving to enforce Trump's order, though the state has no sanctuary cities. A bill this week would hold back taxpayer money.

The actions come in a different political climate from when Oregon instituted its statewide protections. The governor's office said Oregon has not faced any federal reprisals over the years but that it could change.

Gov. Brown said she would fight for Oregon's law, including taking legal action, if Washington tries to withhold federal funding as leverage.

The law means immigrants can go to police when they are a victim of a crime or witness one, without fearing deportation, said Jann Carson, associate director of the ACLU of Oregon.

"The biggest result is that Oregon police have not participated in INS, now ICE, raids on migrant farms, apartment buildings, roadblocks," Carson said.

She said immigrants here illegally can't receive welfare benefits but that many pay taxes. The Social Security Administration estimated immigrants and their employers paid $13 billion in payroll taxes in 2010.

Former lawmaker Dick Springer helped pass Oregon's measure 30 years ago. He said it was driven by unsanitary and crowded living conditions for migrant workers and the agriculture industry's dependence on those workers.

"We were aware of really atrocious conditions for farmworkers ... 50 people would be living in a barn," Springer said in a telephone interview Tuesday.

The 1987 measure received bipartisan support. Asked if it makes Oregon a sanctuary state, Springer said that was his intent.

"We're not going to hassle people that want to make a living and are contributing to our economy," he said, choking up with emotion. "They have a very strong work ethic. They have commitment to faith and to family. Those are the families we cherish, embrace and welcome."