Catholics have peak clout in the new U.S. Congress 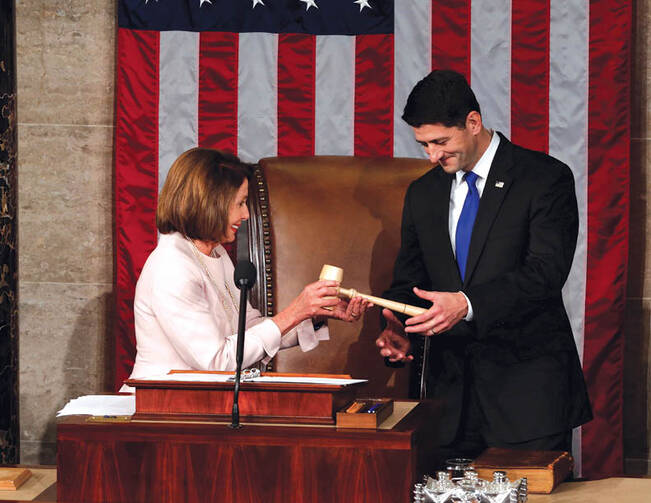 Catholics will enjoy peak clout in Congress in 2017. Almost one-third of the membership is Catholic, as are the leaders of both parties in the House, Republican Paul Ryan and Democrat Nancy Pelosi. Even the House chaplain is Catholic; Patrick J. Conroy, S.J. In the Senate, two Catholic women—Susan Collins of Maine and Lisa Murkowski of Alaska—are among the most moderate members of the 52-to-48 Republican majority and are thus must-win votes in efforts to block appointments or legislative proposals from the new president, Donald J. Trump.

The pro-life movement may be one of the biggest beneficiaries as the Republicans take control of both the White House and Congress for the first time since 2007, but on other issues the power and the inclination of Catholic legislators is uncertain.

Several issues that Congress is likely to grapple with were mentioned in 2015’s “Forming Consciences for Faithful Citizenship,” the document released by the U.S. Conference of Catholic Bishops 12 months before each presidential election. “Affordable and accessible health care is an essential safeguard of human life and a fundamental human right,” the bishops wrote. Both Mr. Trump and Republican congressional leaders have vowed to repeal the Affordable Care Act, but what they might ultimately replace Obamacare with is a mystery. Many Catholic leaders would welcome a change to the act’s mandate that, with few exceptions, employers must provide health plans that cover contraceptives. But other aspects of the law, like the ban on denying coverage because of pre-existing conditions, are more popular.

The bishops also support “measures to strengthen Medicare and Medicaid.” Speaker Ryan instead proposes to “modernize” Medicare, by changing it from a single-payer system to one in which seniors would have to choose from a range of private and public insurers. Mr. Ryan may find more support for his proposal to shift federal Medicaid spending into block grants that states may spend as they see fit; he has described such measures as compatible with the Catholic concept of subsidiarity, or, as he wrote in America, “a prudent deference to the people closest to the problem.”

U.S. Catholic leaders have also backed proposals to increase the federal minimum wage, which has been at $7.25 since 2009. Mr. Ryan and Senate Majority Leader Mitch McConnell have opposed an increase for years; Mr. Trump has been inconsistent on the issue. But a week after the election, Rick Santorum, a Catholic and a former Republican senator from Pennsylvania, urged “a modest increase in the minimum wage to help hardworking families, particularly those...that put their faith in the prospect of a President Trump.”

Paul Ryan: We can do better in the fight against poverty
Paul Ryan

It seems unlikely that the Trump administration and the Republican majority in Congress will agree to immigration reform that would allow undocumented residents to attain citizenship. Nor is the new power line-up in Washington expected to be friendly toward policies to mitigate climate change—though state governments may continue moving away from coal and toward renewable-energy sources.

Whatever happens with other issues, the Trump administration seems to be on the same page as the Catholic Church on abortion. The new president has promised to make pro-life appointments to the Supreme Court, and the new Congress seems amenable to ending federal funding for Planned Parenthood and making the Hyde Amendment, which prohibits federal tax money from going toward abortions, into permanent law.

These changes are due more to the unified Republican control of federal government than to increased Catholic representation in Congress. A few decades ago, there was a large number of pro-life Democrats, but in the last Congress only two Democratic representatives and one Democratic senator received ratings above 50 percent from the lobbying group National Right to Life.

In fact, Catholics are no longer a unified bloc, either in the electorate or in Congress. Simple partisanship has become the force that explains almost all action on Capitol Hill.

RobertDSullivan
Show Comments (
2
)
Comments are automatically closed two weeks after an article's initial publication. See our comments policy for more.
Charles Erlinger
5 years 10 months ago
Reference your conclusion: “Whatever happens with other issues, the Trump administration seems to be on the same page as the Catholic Church on abortion. The new president has promised to make pro-life appointments to the Supreme Court, and the new Congress seems amenable to ending federal funding for Planned Parenthood and making the Hyde Amendment, which prohibits federal tax money from going toward abortions, into permanent law.” As Kelly Anne Conway whined on live TV last week, “You always want to go by what's come out of his mouth rather than look at what's in his heart.”
Lisa Weber
5 years 10 months ago
It would be nice to see some of these Catholic members of Congress speak up about the ethics issues that Donald Trump presents.