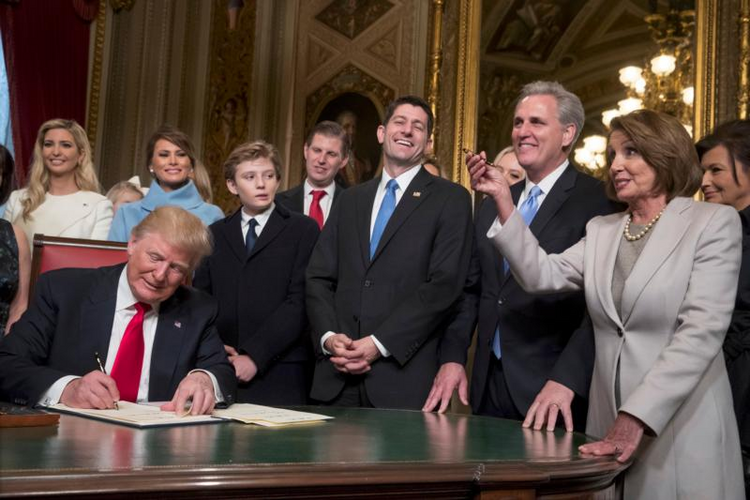 President Donald Trump is joined by the congressional leadership and his family as he formally signs his Cabinet nominations into law Jan. 20 at the U.S. Capitol in Washington. (CNS photo/J. Scott Applewhite, pool via Reuters)

This question, pitched to America readers on social media, received hundreds of written responses over three days. While our readers had different ideas about how Mr. Trump should shape economic policy and tackle poverty, over 60 percent agreed that this topic should be the president-elect’s foremost concern. “Mr. Donald J. Trump should focus on how our society treats its most vulnerable members,” wrote David Lester, from Oregon. “Donald Trump should work with the rest of our leaders to address the social injustices inherent in our systems and root them out, so that everyone has the ability to live with the dignity that we all deserve.”

Victoria S. Schmidt noted that, given the focus on jobs during the president-elect’s campaign, successful economic policy will be essential “in order to gain the trust and support of the American people” in Mr. Trump’s first days in office. From Texas, Millie Wilson explained that she hoped to see Mr. Trump initiating “job retraining where necessary; incentives for manufacturing companies to stay in the United States; and better education for young adults.” Notably, the category economics and poverty was most important to readers in the age bracket 58 to 80 and of least interest to readers over 80 years old.

For other America readers who wrote to us, these political issues are interconnected and difficult to consider in isolation. Barb Contreras, from Ohio, saw “keeping and ‘tweaking’ Obamacare” as an economic issue, and Jo Siedlecka, from the United Kingdom, noted the link between concern for both the environment and the economy. “With his business expertise,” Ms. Siedlecka wrote, “Donald Trump could make America a leader in fossil-free fuel technology, creating new jobs and helping to save the environment.”

An Underutilized System
Re “The Right to Ride” (Editorial, 1/2): It is very encouraging that the editors took notice of the need to plan and fund public transportation. The weakness of mass transit and commuter railroads is that it must be built for peak conditions and therefore for many hours the system is underutilized.
James Schwarzwalder
Online Comment
Vital to Productivity
Improving transport is vital to productivity, growth and quality of life. Aside from a couple major cities, infrastructure is crumbling in the United States. Go to cities like Singapore, Seoul and London and see how it is done. Our current trajectory is a race to the bottom.
Brian Parker
Online Comment
Healing Power of Prayer
Re “Immigrants and the Jinn,” by Erik Raschke (1/2): Mr. Raschke’s article sheds light on an important consideration for mental health professionals. Visiting mosques is a healing experience for some. Prayer-observant Muslims must consider the risks and benefits of taking a sedating medication as prayer times vary according to the sun. Mental health clinicians must remember that medications are not the only path to wellness.
Susan E. Jacobson
Psychiatric Nurse Practitioner
Co-Chair Northern Virginia Coalition for Refugee Wellness
Fairfax, Va.
The Good of Conscience
Re “Called to Conscience,” by James F. Keenan, S.J. (1/2): Thank you for the most thoughtful article. I am saving it for future reference.
In my layman's way of learning, I have learned that conscience is not completely reliable as a reference point for people’s behavior, but it can be good. First, we have to test our conscience by comparing it with Scripture, because we are by nature fallen and imperfect. Second, we can make our consciences unreliable by suppressing them willingly and forming a habit of doing so. Third, Scriptures do not tell us to follow our conscience alone for the two reasons just given.
James MacGregor
Online Comment
A Cinematic Sacrament
Congratulations to America and to James Martin, S.J., for an extraordinary interview with Martin Scorsese (“Creating ‘Silence,’” 12/26).
Upon seeing my first Scorsese film, “Mean Streets,” in 1973, I felt immediately that the director was a special talent, whose conscience was shaped by the Catholic Church. Paying close attention to his career over the more than 40 years since “Mean Streets,” I learned from his films and many interviews that he was greatly influenced by movies and the Catholic Church while growing up on the Lower East Side. I kept waiting for a profound wedding between his technical skill and his Catholic conscience. My wait is over; the marriage has taken place. “Silence” is a masterpiece.
Catholics believe that salvation has been accomplished through the death and resurrection of Jesus and that the Holy Spirit can be encountered in this world through family, friends, nature, history and art—and I think among the arts perhaps especially through film because of its accessibility and potential power. Poet Gerard Manley Hopkins, S.J., said it succinctly: “The world is charged with the grandeur of God.” As Pope Francis emphasized in “Laudato Si’,” all of creation is sacred and can be sacramental, a graced way to God. “Silence” may be the most profoundly personal film ever created by an American filmmaker. It is also a cinematic sacrament.
(Rev.) Robert Lauder
Queens, N.Y.
More: US Politics / Donald Trump / Immigration / Health Care / Economics

Michael Olson ·
The Trump Administration is already an on-going train wreck. The twisted rails are called
alternative facts. There is no easy fix by those who do not understand what they are doing.