Catholic bishops urge Congress not to repeal Obamacare without a replacement 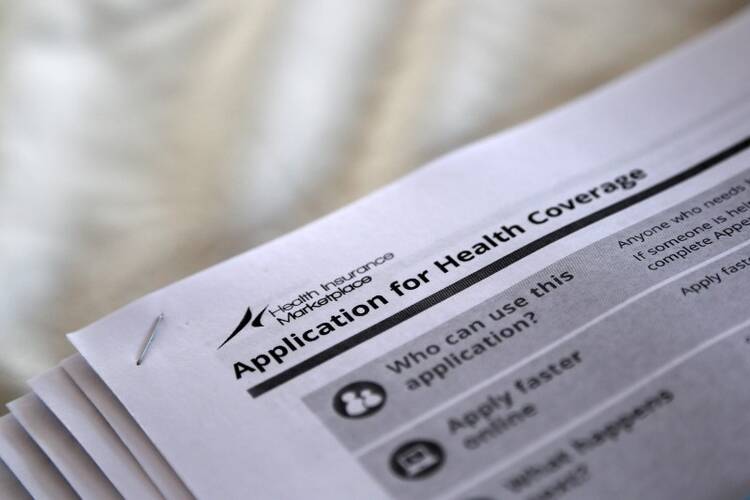 The federal government forms for applying for health coverage are seen at a 2013 rally held by supporters of the Affordable Care Act at a health care center in Jackson, Miss. (CNS photo/Jonathan Bachman, Reuters)

Catholic bishops in the United States urged a pause in efforts to repeal the Affordable Care Act until Congress can ensure that the millions of Americans who rely on the A.C.A. for health insurance can be guaranteed coverage.

In a letter sent to senators and representatives on Jan. 18, Bishop Frank J. DeWane, head of the U.S. Conference of Catholic Bishops’ committee on domestic justice, wrote that while the group originally opposed Obamacare because it “expanded the role of the federal government in funding and facilitating abortion,” it nonetheless recognizes “that the law has brought about important gains in coverage and those gains should be protected.”

“The Catholic bishops of the United States will examine health care proposals in greater depth and from various perspectives in the days ahead,” he continued.

“But we note for now that a repeal of key provisions of the Affordable Care Act ought not be undertaken without the concurrent passage of a replacement plan that ensures access to adequate health care for the millions of people who now rely upon it for their wellbeing.”

President-elect Donald J. Trump promised during his campaign that he would repeal Obamacare, and the Republican-controlled Congress has taken the first steps in recent days to make that possible.

Bishop DeWane’s letter notes that Catholic bishops have long supported universal access to health care in the United States. The Congressional Budget Office, Congress' nonpartisan budget analyst, estimated on Jan. 17 that a bill passed in 2016 to only repeal—not replace—the law would result in 18 million more uninsured people and a spike in premiums.

But elements of the Affordable Care Act, which has brought the rate of uninsured Americans down to record low levels and coincided with a plummet in the U.S. abortion rate, promote greater access to contraception. The law included limited exemptions from its contraception mandate for some employers who object on religious grounds.

The act’s critics charge that its design has led to federal funding for abortion, as some insurers include the procedure in plans that can receive federal subsidies. These provisions caused a row within the church during the bill’s passage in 2010, with bishops largely opposing the measure while other Catholic leaders supported it.

John Carr, who led the U.S.C.C.B.’s domestic policy shop for many years before his retirement in 2012, told America that the statement was “an important, principled and timely contribution because it lifts up the moral and human imperative to provide health care for all in the middle of a partisan and ideological battle."

Fallout from the bill has led to several lawsuits from Catholic entities in recent years, perhaps most notably from the Little Sisters of the Poor, a group of women religious who run nursing homes for the elderly.

Claiming that their religious liberty was at stake, the sisters successfully sued the Obama administration over its requirement to sign a form stating that their health insurance plans did not cover contraception, which would trigger third-party coverage for contraception through insurers.

But other Catholic leaders have been supportive of the law’s overall goal.

At a conference in Washington earlier this month, Sister Carol Keehan, head of the Catholic Health Association, called health care “a basic human right,” and she urged “a united voice” from Catholic leaders to say it is “intolerable” for the tens of millions of Americans who receive health insurance through Obamacare to risk losing their coverage.

Sister Keehan was a key early supporter of the bill, receiving one of the pens President Obama used to sign the bill into law.

This story was updated at 12:31 p.m. on Jan. 18 with a reaction from John Carr, former head of U.S.C.C.B. Office of Social Development and World Peace.

we have to pass the bill so that you can find out what is in it,

So I suggest that those who make the claim there is no Republican plan and who make links to sites that say this are really guilty of promoting "fake news." Of course there is the question of just what is "fake news" these days. Now it may turn out that many of the ideas by the Republican congress legislatures may prove inadequate but to say they don't have a plan is nonsense.
Charles Erlinger
6 years ago
I'm sure that most commenters already know this, but since it has not been stated explicitly, I would like to state it for the record: The policy objective of universal health care is fundamentally incompatible with the strategy of achieving the objective by means of the commercial insurance business model. The insurance model as we know it is completely dependent on the workable intersection of actuarial risk assessment, underwriting risk evaluation and selectivity, and product pricing to insure the ongoing ability to pay anticipated claims. For some reason that escapes me, we tend to talk as if care insurance is the same as care. How obvious does it have to be that the two terms are not synonymous?