What an auspicious time for this heartfelt and inspiring book to be released. Part diary, part travelogue and part remembrance, Thea’s Song: The Life of Thea Bowman, tells us the story of an “unlikely black heroine,” a Franciscan sister born in Mississippi at the tail end of the Depression. Given the alacrity with which many Americans have embraced the concept of a “post-racial society,” Thea Bowman’s long struggle to open the Catholic Church to African-American spirituality is a story all American Catholics should know. Furthermore, her life’s work has much to tell us about current intellectual and cultural divisions within the church that have been exacerbated by the failure to appreciate a fundamental lesson of her witness: Universal does not mean uniform.

Thea Bowman’s home was the fertile Delta region of Mississippi. Its rich alluvial soil supported huge plantations that produced the prodigious wealth on display in places like Vicksburg, Natchez and Memphis. Enormous numbers of slaves were required to keep the money flowing, and well into the 20th century the descendants of these slaves labored as sharecroppers to provide the cheap labor vital to this economic system. A relatively small class of wealthy, white landowners and a very small white middle-class were supported by poor blacks, who far outnumbered them. Consequently, the Delta became an area of the South with some of the most rigid and harshly enforced Jim Crow laws and social practices. Thea (born Bertha) Bowman was born into the relatively privileged (but materially modest) household of the only black doctor and one of the few black schoolteachers in Canton, Miss. They were an educated couple who, when blessed with their only child late in life, provided the loving home and high expectations that would ground Sister Thea for her entire remarkable life.

It is hard for us to imagine today the leap of faith that was required for young Bertha Bowman to leave the tightly knit confines of the black community in Canton to become a nun in La Crosse, Wis. Attracted by the improved educational opportunities made available by the opening of a Catholic mission to blacks, Bertha’s family had become involved with Holy Child Jesus parish and eventually converted to Catholicism. The parish school was staffed by the Franciscan Sisters of Perpetual Adoration, strong, inspiring women who lovingly encouraged young Bertha’s intellectual gifts and who modeled the unimaginable—a loving community of faith made up of blacks and whites. These women ultimately set the example that moved Bertha to leave everything she had ever known. In 1953, at the age of 15, she became a Franciscan aspirant at the motherhouse in La Crosse. In 1958, Sister Mary Thea became a professed sister. She would remain dedicated to her vocation as a nun for the rest of her life—no easy task for anyone, but particularly not for an African-American woman in an all-white congregation during the tumultuous decades that followed the Second Vatican Council.

The council created an opportunity for Sister Thea to find her authentic spiritual voice, which knitted together her black Southern self, her remarkable intellect and her fierce devotion to her Catholic faith. She earned her doctorate in English at Catholic University of America in 1972 and went on to teach in and chair the English department at Viterbo College in Wisconsin. Her life as a graduate student in Washington, D.C., exposed her to the intellectual ferment of the civil rights movement, and as she befriended men and women from around the world, she began to realize the rich possibilities offered by life in a cosmopolitan community. She would later make extended trips to Europe and Africa. Ultimately, the seeds were planted for her ministry of African-American expression in Catholic worship and, more generally, greater cross-cultural awareness within the church.

Thea Bowman’s life was cut short by cancer in 1990, but during the 1980s, she achieved international renown sharing and spreading the African-American spiritual traditions of her Mississippi childhood. An accomplished singer, she demonstrated through song, dance, body movement, moaning, humming and chant that people of African descent had important messages and gifts to offer the universal church.

At a time when much of Catholic worship was suffering an identity crisis, Sister Thea reminded Americans that there was a vibrant, soulful and prayerful spirituality that had long been nurtured by their black brothers and sisters. This tradition could offer richness and authenticity to Catholic worship through its ability to reach people of all cultures emotionally, spiritually and physically. Perhaps the most enduring symbol of Sister Thea’s legacy is the Lead Me, Guide Me hymnal, a collection of hymns in the African-American tradition for use in Catholic churches. It can be found in parishes throughout the United States, regardless of the ethnic make-up of the congregation.

Would that Sister Thea were with us now! No doubt she would be thrilled to see the election of the nation’s first African-American president, and she definitely would have something to say about those who think they can decide who is a “real” Catholic and who is not. Perhaps she would quote her grandfather, a former slave, who told her that the worst form of slavery is not that which comes with chains and shackles from the outside, but the enslavement of the mind that “keeps us from reaching out to one another and being to one another the cause of freedom and the cause of strength and the cause of life.” She would tell us to stop tolerating the boundaries of race, class, education and money. She would urge us to dance. She would definitely sing.

This article also appeared in print, under the headline “A Soulful Pray-er,” in the April 12, 2010, issue. 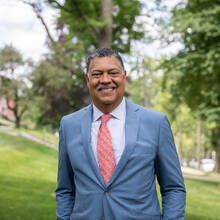 Vincent Rougeau is associate professor at Notre Dame Law School and the author of Christians in the American Empire (Oxford Univ. Press).