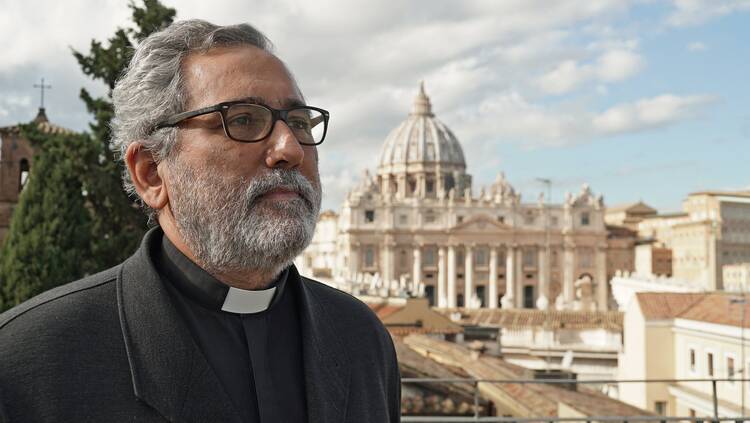 Jesuit Father Juan Antonio Guerrero Alves, prefect of the Secretariat for the Economy, is pictured in an undated photo. Father Guerrero has resigned for health reasons. Pope Francis has appointed the office's general secretary to succeed him. (CNS photo/courtesy Society of Jesus)

Pope Francis has accepted the resignation of the prefect of the Secretariat for the Economy of the Holy See, Juan Antonio Guerrero Alves, S.J., “for personal reasons,” the Vatican announced today, Nov. 30, in a statement that stunned many people in Rome. The resignation will take effect tomorrow, Dec. 1.

The Vatican said, “the Holy Father warmly thanks” Father Guerrero “for the dedication he has shown in the service he has given to the Holy See” and for having “succeeded in organizing the economy well” through “hard and demanding work that bore many fruits.”

At the same time, the Vatican announced that Pope Francis has appointed the Spanish lay man, Maximino Caballero Ledo, to succeed him as prefect of the Secretariat for the Economy. A close friend of Father Guerrero, he has worked with him as secretary general of the secretariat since Francis appointed him to that post on Aug. 2, 2020, and so is well suited for the top job. Prior to that, Mr. Caballero Ledo had gained extensive experience as a finance leader with Baxter International, a Fortune 500 American health care company, as reported by America at the time.

As the new prefect, Mr. Caballero Ledo becomes the second lay man to hold a top position in the Vatican, the other being Paolo Ruffini, the prefect of the Dicastery for Communication. This has come about as a result of the pope’s reform of the constitution of the Roman Curia (“Predicate Evangelium”) in which he separated the power of governance in the church from that of Holy Orders, thereby opening many of the top Vatican positions to lay people.

As the new prefect, Mr. Caballero Ledo becomes the second lay man to hold a top position in the Vatican, the other being Paolo Ruffini, the prefect of the Dicastery for Communication.

Father Guerrero’s resignation at the age of 63 came as a major surprise to Vatican officials and employees where he was respected for his dedication, competence, hard work, integrity and humility. It was well known in the Vatican that the pope had deep trust in the Spanish Jesuit, and America has learned that Father Guerrero only managed with difficulty to convince Francis to accept his resignation. A source close to him told America, Father Guerrero “is now at peace” after taking the difficult decision to resign.

Father Guerrero first broke the news with a letter to the staff of the secretariat just before the Vatican announcement, in which he explained that he was resigning “for personal reasons.”

In the letter, published by Vatican News, he recalled that he had “undergone surgery during the course of this year, and as a result of this I am undergoing medical treatment that has side effects that make it particularly difficult for me to carry out a task as demanding as the one I am entrusted with, and that requires a greater physical efficiency and mental concentration than what I have at this time.”

The Vatican’s statement this morning said, “the Holy Father assured [Father Guerrero] of his prayers.”

Pope Francis had appointed Father Guerrero as prefect on Nov. 14, 2019, as successor to Cardinal George Pell. The pope had appointed the Australian cardinal to be the first prefect of the secretariat in February 2014, when he established the secretariat as a first major step in the reform of Vatican finances as requested by the College of Cardinals in their meetings just before Pope Francis’ election. But the cardinal left his post and returned to Australia in 2017 to face trial for allegations of abuse of minors. He was first condemned to prison but later acquitted by the country’s supreme court.

“We have helped make clearer rules,” Father Guerrero wrote to his staff, “but there are still many things in the pipeline.”

The Spanish Jesuit succeeded him after the post was left vacant for two years, and in today’s letter, he recounted his journey over the past three years. He told the staff that he was leaving his post as prefect “with sadness, but also with immense gratitude to the Lord, to the Holy Father and all of you, and with the satisfaction that together we have contributed to the economic reform called for [by Pope Francis].”

“Together, and in collaboration with other curial institutions,” Father Guerrero wrote, “we have helped the Holy Father to take important steps in the economic organization of the Roman Curia, in transparency, upholding the credibility of the Holy See concerning economic matters.”

“We have helped make clearer rules,” he said, "but there are still many things in the pipeline.” He listed some of these: “the centralisation of investments, the further regulation and simplification of procurement processes in order to make them more transparent and streamlined; the implementation of a Directorate for Human Resources, which is a new challenge to improve the working conditions and atmosphere within the Holy See; and the planning of greater use of computerized procedures.”

Father Guerrero told them, “We are now entering a new phase,” that “requires a more competent person and, above all, someone who is in his prime,” referring to his fellow countryman, Mr. Caballero Ledo.

Looking back over what was achieved in his three years as prefect, Father Guerrero said: “We have experienced that in the process of reform there are forward steps and backward steps, but as the years go by, we see real progress. We are not now at the same point at which we started.”

Then, alluding to the internal opposition he encountered, sometimes even at high levels, and the difficulties he had experienced as he sought to carry out the mission entrusted to him by the pope, Father Guerrero said, “We know that being a controlling body always involves being in an uncomfortable position for those who are controlled.” He asked forgiveness if anyone felt they had not been “treated adequately” by him during these years.

He expressed confidence in the secretariat’s staff and said, “I am certain that you will continue to work with humility and in a spirit of service and cooperation with the other curial institutions.” True to the spirit of Pope Francis, he reminded them that the “economy must always be a servant, never a mistress, and even more so in an institution like the Holy See.”

He concluded his letter with these words: “I encourage you to continue with renewed commitment your service to the Holy Father for the good of the church, and I assure you of my prayers for yourselves and your families.”