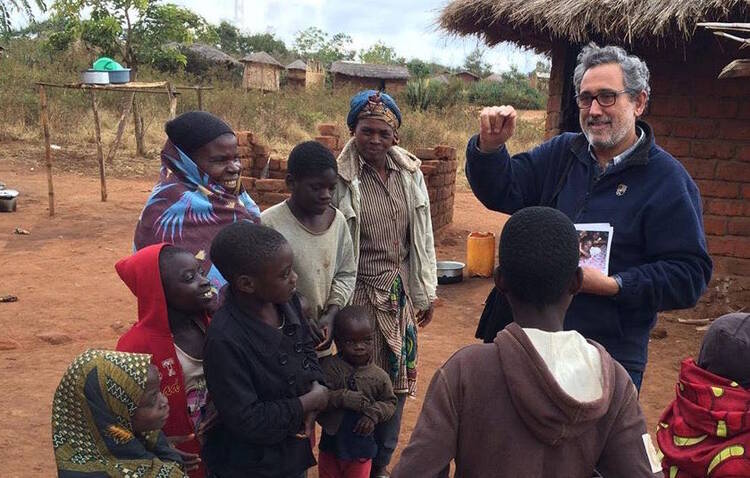 Juan Antonio Guerrero Alves, S.J. (far right), the new prefect of the Vatican’s Secretariat for the Economy, shown here in Mozambique in an undated photo.

Pope Francis has appointed Juan Antonio Guerrero Alves, S.J., a Spanish Jesuit with a degree in economics as well as considerable administrative and international experience, as the new prefect of the Vatican’s Secretariat for the Economy.

The Vatican announced the appointment on Nov. 14. It came as a surprise because while various names had been mentioned for this important post, until recently his was not under consideration. Sources told America Father Guerrero was Pope Francis’s own choice, though the two had only met in 2017.

The appointment of Father Guerrero as the new prefect of the Vatican’s Secretariat for the Economy came as a surprise because while various names had been mentioned for this important post, until recently his was not under consideration.

One source added that Pope Francis wanted someone who would ensure “transparency” and uphold “international standards” in Vatican finances, someone who would bring about “savings” in its manifold operations so as to avoid deficits and be mindful that the money the Vatican receives is destined for the service of the poor. (Vatican finances have been the source and subject of a number of financial scandals in recent decades.)

In pre-conclave meetings before the election of Pope Francis in 2013, many cardinals asked that whoever was elected pope “clean house” and ensure total accountability in all Vatican finances. As part of his reform of the Roman Curia in the field of financial matters, Pope Francis established the Secretariat for the Economy in February 2014 and entrusted it with responsibility for administrative and financial control and oversight of all Roman Curia offices as well as the institutions linked to the Holy See and the Vatican City State administration.

Father Guerrero succeeds Cardinal George Pell of Australia, whom Francis appointed as the secretariat’s first prefect in February 2014 for a five-year term of office. Cardinal Pell was recognized for his valuable work despite considerable opposition from others inside the Vatican, but he had not been able to finish the job by June 2017 when he returned to Australia to face charges for the sexual abuse of minors. Although Cardinal Pell has always protested his innocence, he was convicted by a Melbourne jury after a trial that concluded last December and was sentenced to six years in prison last March. The cardinal’s five-year term of office officially ended just before that, on Feb. 24, and the appointment of a new prefect has been under consideration ever since.

Although Pope Francis’s “Motu Proprio” establishing the secretariat states that the prefect should be a cardinal, Father Guerrero, 60, will not be named a cardinal or a bishop in this post.

Although Pope Francis’s “Motu Proprio” establishing the secretariat states that the prefect should be a cardinal, America has learned that Father Guerrero, 60, will not be named a cardinal or a bishop in this post. Nevertheless, Father Guerrero’s authority comes from the fact that he will respond not only to the Council for the Economy, headed by Cardinal Reinhard Marx, but also directly to the pope. Arturo Sosa, S.J., the Superior General of the Society of Jesus, expressed the joy of the Society in its availability for service to the Holy Father and the Holy See. "When the request of the Holy Father came to me, I welcomed it with openness and availability," Father Sosa said, adding that he asked His Holiness that Father Guerrero not be appointed a bishop so that Father Guerrero could return, after finishing his mission, to his normal life as a Jesuit.

Born in Madrid in 1959, one of four children, Father Guerrero developed an interest in financial matters from an early age because of his father’s business, sources who know him told America. Consequently, he decided to study for a degree in economics at Universidad Autónoma de Madrid (1976-79) but while doing so discovered his vocation to the Jesuits.

After doing his novitiate in Madrid (1979-81), he continued his studies in economics. In later years he also obtained degrees in Philosophy and Letters at Spain’s Pontifical University at Comillas and at the Universidad Autónoma de Madrid (1993) before going on to study for a degree in theology in Belo Horizonte, Brazil; Lyon, France; and Comillas, Spain. He completed his tertianship in Mexico and then finished his academic pursuits with a doctorate in political philosophy at Boston College in the United States (1998-99).

Jovial, bearded and sharp-minded, Father Guerrero has gained much academic experience as a professor, including teaching human and social sciences at the Pontifical University of Comillas in Madrid (1994-97 and 1999-2003). He is the author of many articles in social and political philosophy as well as in Ignatian spirituality. He has also given many retreats, including one last year to the Spanish bishops.

Father Guerrero served as Master of Novices in Spain (2003-2008) and was then appointed Provincial Superior of the major Spanish province of Castilla (2008-2014), a role that involved overseeing not only the 624 Jesuits working in three universities, 18 colleges, 11 parishes and 10 churches, but also those in many other works, including retreat houses and intellectual centers.

Father Guerrero has considerable experience with budget planning and control, as well as fundraising.

Following this period as provincial, he went as a missionary to Mozambique. He worked as treasurer of the Society of Jesus and coordinator of projects there and did extensive fundraising—an area where he also gained experience over these years. He also served as head of St. Ignatius of Loyola secondary school in Mozambique.

New Secretariat For the Economy
From AP, CNS, RNS, Staff and other sources

After less than three years in southern Africa (2015-17), however, he was called to Rome and appointed delegate of the Superior General for the Roman houses of the Society of Jesus, a post Father Sosa held before he was elected superior general. This new work involved overseeing, also from an economic and administrative perspective, such academic institutions as the Pontifical Gregorian University and Biblical Institute, the Oriental Institute, the Vatican Observatory, Vatican Radio, the Bellarmino and Gesu student residences and guest houses, and much else.

From all these works, he has gained considerable experience with budget planning and control, as well as fundraising. Though he has never worked in the Vatican, he has gotten to know many Vatican offices and the people who work there because of his work as delegate. He has also served as general counsellor to Father Sosa.

Father Guerrero told Vatican News that he accepted the appointment to be prefect of the Secretariat for the Economy out of obedience. "I thank the Holy Father for allowing me to carry out this mission as a Jesuit, so that I can continue to remain a Jesuit when this service ends," said Father Guerrero. He will take up his new post on Jan 1, 2020.

Editor's note: This story has been updated with further information.