Have a meal prayer, share responsibility, take your time at the table: Tips for a grace-filled Thanksgiving 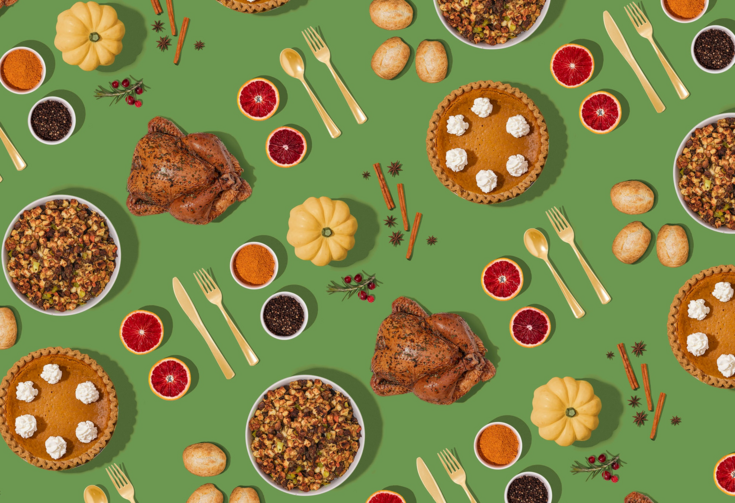 Photo by Amy Shamblen on Unsplash

It’s Thanksgiving: time for turkeys, football and awkward family conversations about religion and politics. And while it may not initially seem like life in a Jesuit community would have much to offer in the way of suggestions on navigating the perils of dinner with your in-laws, we Jesuits actually spend our whole lives eating meals with people that we don’t always know how to talk to or some days even like—that is, each other.

If you’re looking at Turkey Day with a certain amount of apprehension, here are a few tips from Jesuit life that we’ve found help make things not only manageable but sometimes unexpectedly great.

1. Have a meal prayer

You know what’s really nice at Thanksgiving? A prepared prayer for grace.

This is not me asking for an invitation to your Thanksgiving. (Or is it?) You don’t need a priest, a nun, a brother or a deacon to have a nice meal prayer. You can do it yourself. Truly! Anybody can.

I asked our own resident pray-er in chief, James Martin, S.J., for some tips on writing a meal prayer. He had three suggestions. First, “Don’t try to anticipate what might sound like a good prayer to others. Just write from the heart.” It’s really true; if you say what’s in your heart, it’s going to be beautiful no matter what. (As long as it’s not 10 minutes. Don’t go 10 minutes. The food will get cold, and people will get antsy.)

If you’re looking at Turkey Day with a certain amount of apprehension, here are a few tips from Jesuit life that we’ve found help make things not only manageable but sometimes unexpectedly great.

Second, Father Martin says, “Speak conversationally to God, ‘friend to friend,’ as St. Ignatius says.” As we are growing up, we’re taught that spoken prayer has a certain formality. We say certain specific words like the Our Father at certain specific times, and that’s what prayer is.

But a spoken prayer does not have to be so formal. It can be relaxed and conversational. If it helps, imagine that your entire Thanksgiving group are on a Zoom call with God, and you’re the one that gets to talk because otherwise the call would go forever. What would you say?

Finally, Father Martin suggests, “Always start with gratitude.” You’ll never go wrong with a prayer if what you have to say is “Thanks.”

2. Try to give everyone some responsibility

When it comes to big meals, Jesuits love a sign-up sheet. Setting the tables, preparing the appetizers and the different parts of the meal, and doing the clean up all get divvied up among us.

There are obviously some risks in this approach. You might have someone who doesn’t know much about cooking who decides they want to try making the sweet potatoes or worse, the turkey. You also may very well end up with people doing things in a way different than you would do them: They don’t turn the napkins into origami swans or they only make fruit pies for dessert because of a bad childhood experience with pumpkins.

You don’t need a priest, a nun, a brother or a deacon to have a nice meal prayer. You can do it yourself. Truly! Anybody can.

But on the upside, no one is left holding the bag and having to take care of too much on their own.

Also, part of sharing in a holiday is sharing in its creation. When you split up the responsibilities, everyone gets to feel like they contributed to making the evening special. Even a burnt-to-a-crisp turkey, while not ideal, becomes an experience you’ll remember and laugh about for years to come.

I can also tell you this from living in community most of my life: Allowing people to pitch in is always better than shutting them out. I’ve lived in communities where the same couple guys insist on doing all the holiday cooking or where volunteers get shut down because what they want to prepare doesn’t “pair well” with the turkey. (You gotta love it when we Jesuits fit the caricatures people make of us.) Those kinds of controlling instincts only make people feel bad about themselves.

I realize that by the time you’re reading this, the main responsibilities for the meal itself may have been assigned already. But who’s setting the table? Who’s going to keep the kids busy once the sugar from the cranberries hits? Who’s going to make sure the sidewalk stays dry? And above all, who’s cleaning the dishes? (If you’re at your Grandma’s on Thursday and you’re watching her scrub pots, you are definitely doing Thanksgiving wrong.)

Part of sharing in a holiday is sharing in its creation. When you split up the responsibilities, everyone gets to feel like they contributed to making the evening special.

Bottom line, everybody has gifts to contribute, and the holiday will be better for them all.

3. Resist the temptation to do the “drinks and dinner dance”

If you’re having Thanksgiving with more than a couple people, there are almost certainly going to be a few that you don’t know well, don’t have much to say to, or find to be the stuff of nightmares, like the uncle who is always insisting you lay out the plans for your future. (Family, do not ask your relatives what they’re going to do after graduation, when they’re getting married or when they’re going to start having kids.)

The desire to avoid some of those kinds of interactions makes sense. But over the course of an evening, try to make time for more than just the people who are easy. It’s about respect, largely. In the Jesuits, where meals usually involve a buffet line, we’re generally expected to fill the empty seats at one table before starting a new one. You eat with who’s already seated. And occasionally it’s quite a show watching guys glissade their way into sitting with their friends, or ciseaux away from others they don’t want to eat with.

But people know when they are being avoided or shunned. And especially at the holidays, no one should feel like they’re not worth spending time with.

People know when they are being avoided or shunned. And especially at the holidays, no one should feel like they’re not worth spending time with.

The other thing is, when you take the time to hang out with someone you don’t really “get,” you create an opportunity for something new to happen. Sitting with that cousin who usually can only talk about football may be awkward or difficult. But maybe it won’t this time. Maybe this is the year they discovered “Doctor Who,” and you finally have someone who agrees with you about Matt Smith being a better Doctor than David Tennant. By taking the time to be with people we don’t have a natural connection with, we make room for the Holy Spirit to come.

4. Take your time at the table

From the day that I entered the Jesuits, I was told that a good Jesuit spends at least 45 minutes at the dinner table. It doesn’t matter if they’ve finished eating or the conversation has gone dead. You stay at the table.

As draconian as that sounded in the abstract, in general I have found it to be a pretty great practice. First of all, I’m more likely to actually enjoy the meal. I don’t know about you, but I’ve had plenty of dinners where I eat everything so fast that I don’t remember tasting it when it’s over. I might as well have consumed it with a straw.

Knowing that you are going to be sitting here for a while slows you down. It makes you more present to the moment. You can even make it a conscious choice to savor each bite.

I find some of the best conversations happen on the other side of a lull. It’s like the discomfort opens us up to take more risks or be more playful with each other.

It’s also a great practice in terms of conversation. Blocking off a significant period of time for dinner takes away any sense of rush. We can all just settle in and hang out. Conversational lulls do happen and can be awkward, but then they pass. In fact, I find some of the best conversations happen on the other side of a lull. It’s like the discomfort opens us up to take more risks or be more playful with each other.

5. Find a group activity that fits your group

In the last decade or so, a tradition has developed where those gathered at a Thanksgiving are asked to say what they’re grateful for either directly before the meal or during it. It’s a lovely idea, an attempt to bring to life the spirit of the holiday.

But I commiserate with anyone who feels trapped when this activity gets announced. It can be hard to “do” gratitude on the spot in authentic way. The things we’re grateful for are often pretty personal and might be difficult to share on command.

When planning a group activity, it’s important to think about your group. What is their comfort zone?

When planning a group activity, it’s important to think about your group. What is their comfort zone? Some families play football before dinner or do a board game over dessert. In a lot of Jesuit communities, we sit around after dinner and tell stories about our own lives and Jesuits that we’ve lived with. I’d imagine this Thanksgiving and Christmas, there’ll be a lot of Jesuit communities around the States telling tales of the late John O’Malley and John Padberg, both of whom were so loved.

Though we don’t name them as such, these kinds of moments are other ways of expressing or living out our gratitude. In my experience, they often work better than a formal exercise during dinner. Until the meal is over, there’s just so much going on and so much pressure felt by the cooks to make sure everything is perfect. It’s not a great time to ask people to stop and share. Once all the official stuff is over, it’s easier to be present and enjoy ourselves.

Whatever your Thanksgiving plans (and adventures), know that all of us at America are thankful for you this year and wishing you the very best this holiday season.