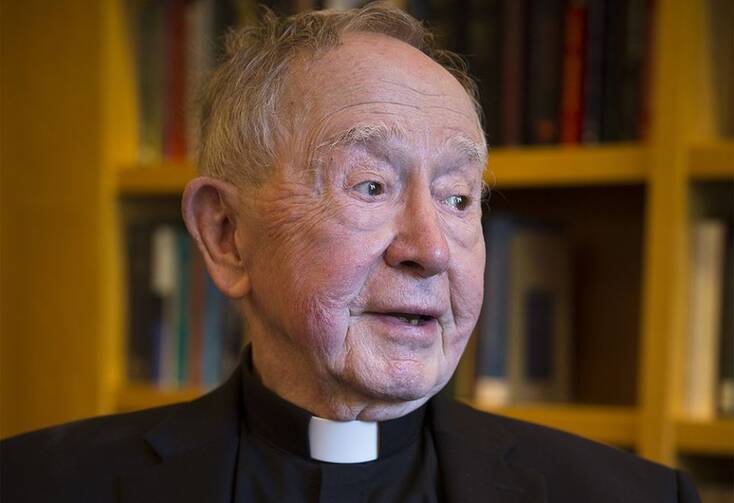 I don’t know anyone who didn’t love and admire John W. O’Malley, S.J.

This great Jesuit priest, dean of Catholic historians and author of groundbreaking historical works, who taught generations of Jesuits, priests, religious men and women and Catholic laypeople, died today at the age of 95 at the Colombiere Jesuit Community in Baltimore.

It is hard to know where to begin to praise John, so manifold were his gifts. And I certainly cannot sum up his rich and fruitful life as a Jesuit priest in just a few paragraphs. And any list of the awards and honors he received from every quarter—religious and secular—would fill several pages.

I don’t know anyone who didn’t love and admire John W. O’Malley, S.J.

First, perhaps, he was one of the best teachers I have ever had.I took his justly famous course in church history at the old Weston Jesuit School of Theology, now the Boston College School of Theology and Ministry, during my formation as a Jesuit. There was simply no question of whether or not one would take John O’Malley. One simply had to.

His course was given a bland title like “Church History, Part 2,” but really it was an introduction to the church through the eyes of one of the greatest scholars of our time: awesomely learned, effortlessly erudite and always a lot of fun.

I already knew about the fun part. My first encounter with John was through his beautiful book The First Jesuits, which my formation director had carried from the United States when he visited me during my time as a Jesuit regent in Kenya, working with Jesuit Refugee Service. I was astonished by the book.

By this point I had already read several biographies of St. Ignatius Loyola, each of them duller than the last, as well as some histories of the Society of Jesus, also solid, workmanlike but incredibly dull. But John’s book, with its captivating opening line, quoting John Addington Symonds, hooked me: “‘Seven Spanish devils’ entered Italy in the year 1530.” One of them, said Symonds, was “Jesuitry, with its sham learning, its shameful lying and casuistical economy of sins.”

John seemed to know everything that had been written about what he called (I think he invented the term) “Early Modern Catholicism.”

So when I started my theology studies at Weston, I was attending one of our weekly Jesuit gatherings where the entire community, perhaps 100 of us—teachers and students—came together for Mass, socializing and dinner. In a small conversational cluster, I found myself with three giants: Daniel J. Harrington, S.J., the renowned New Testament scholar; Richard Clifford, S.J., the Old Testament scholar; and John, whom I had never met. I admit I was in awe.

“Are you the same John O’Malley that wrote The First Jesuits?” John nodded as Dan and Dick smiled.

I told him how much I loved his book: its writing, its style, its almost effortless command of the facts. It helped me finally to understand Ignatius. “But I’m sure you get tired of hearing all that, right?” John silently held his hand out, smiled and said, “Go on.” Dan and Dick exploded in laughter.

He could command a classroom like no one else. Perhaps this was because he seemed to know everything that had been written about what he called (I think he invented the term) “Early Modern Catholicism.”

In fact, he knew so much that one of his most common phrases was “No time,” which he would deploy at the beginning of a class, by way of introducing what we were (and weren't) going to cover in the next 90 minutes: “The history of Baroque art and how the Jesuits influenced that genre? Very important material. Fascinating in so many ways. But no time!” And then he would take off on a tour d’horizon of the church in the Baroque period, with his dazzling mastery of names, places, events, documents, popes, stories and even some gossip. (Every good historian loves gossip. John enjoyed it in several languages.)

I don’t think there was anyone who didn't want to take one of John's classes at Weston. Sadly, I was unable to take his course "Two Great Councils," on Trent and Vatican II. (It would form the basis for two later books.) A few years after I left Weston, I asked him playfully if he would ever teach a course called "Two Terrible Councils." He instantly put his hand to his chin and started thinking, "Hmm…. which ones would I choose? There are several that would fit the bill!"

John, I would find out later, didn’t hit his professional stride until relatively late in life, something many of his Jesuit friends remarked upon. The First Jesuits was published in 1993, when he was 66. His other magnum opus, What Happened at Vatican II, was published in 2008, when he was 81.

In that second book, he offers what I think is the single best short paragraph on what the Second Vatican Council meant. It was a shift, John wrote:

from commands to invitations, from laws to ideals, from definition to mystery, from threats to persuasion, from coercion to conscience, from monologue to dialogue, from ruling to serving, from withdrawn to integrated, from vertical to horizontal, from exclusion to inclusion, from hostility to friendship, from rivalry to partnership, from suspicion to trust, from static to ongoing, from passive acceptances to active engagement, from fault-finding to appreciation, from prescriptive to principles, from behavior modification to inner appropriation.

Only a scholar in full command of his material could provide such an elegant (and accurate) summary.

But John wasn’t loved just as a scholar or teacher, distinguished as he was in those categories. He was loved by his brother Jesuits, his students and friends, as a person: a holy and generous Jesuit priest. Unfailingly kind, helpful, generous, mild, curious, modest (even for his humorous occasions of faux-pride) and always interested in you. John was never too busy to answer a question, give you some advice, point you to some resource or tell you some funny story. He had a great talent for friendship, and it was reciprocated.

John wasn’t loved just as a scholar or teacher. He was also loved by his brother Jesuits, his students and his friends, as a person: a holy and generous Jesuit priest.

That friendship was always enlivened by his puckish sense of humor. In 2007, when I pronounced my final vows as a Jesuit at the Church of St. Ignatius in New York City, I was honored that he came all the way from Georgetown, where he worked and lived after he left Weston. He showed up to the Mass dressed in an elegant suit jacket, olive colored, with a faint plaid. It looked very “European” to me. “John,” I said, “You look so dapper.” His lips curled into an elfin smile, as if to let me in on a little joke. “No, Jim, I am dapper.”

Even in his failing health, John continued to connect with people. A few days ago, when I heard he was in hospice, I emailed him. Within just a few minutes, I received a warm and gracious email, in the 16-point type he had come to use in the past few years. “You are special to me!” he wrote.

When John would say, “No time!” in class, it meant there was no time for subjects that were clearly fascinating but beyond the purview of the class. But John always had time for people.

John was special to all who knew him: Jesuit, priest, scholar, teacher, writer, mentor, friend. I want to thank him for teaching me so much about St. Ignatius Loyola, about the Jesuits and about the church that we all love. It is primarily through John's eyes, his scholarship, and his interpretive framework that I see all those things today.

And now, he enters into the heavenly banquet where for the rest of time, he will celebrate with Jesus, the one whose Society he entered, whose church he served and whose church history he taught.

May you rest in peace, John. May you who gave so much of your time to us, enjoy the time of joy that God now gives to you, and may we all meet in the fullness of time.

James Martin, S.J., is a Jesuit priest, author and editor at large of America.