R.I.P. John Padberg, a Jesuit historian and a historian of Jesuits 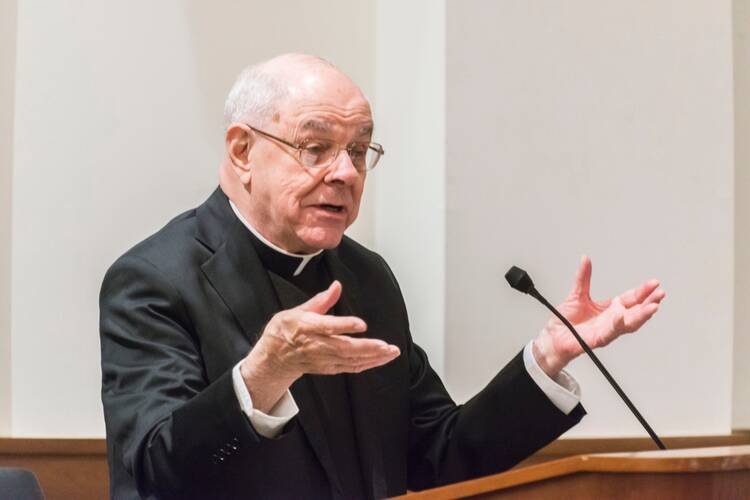 On Christmas Day, John W. Padberg, S.J., died in Saint Louis, Mo., at the age of 95. He had been a Jesuit for 77 years and a priest for 64. Widely known and respected for his scholarship, he was a Jesuit historian in two senses of the term—a Jesuit who wrote about history, and a historian who wrote about the Jesuits. As such, he was an important figure in a movement that significantly reconfigured the ethos and spirituality of the Society of Jesus. This movement began in Spain and France in the early years of the 20th century and moved to North America decades later, just as John reached his maturity as a historian.

Important as John Padberg’s scholarship was, his influence on the lives of those who knew him was just as important.

After graduating from Saint Louis University High School in 1944, he entered the novitiate of the Missouri Province of the Society of Jesus. He was ordained a priest on June 19, 1957. In 1959, he began working toward a doctorate in history at Harvard University. When he finished a few years later, Harvard published his dissertation on Jesuit schools in France in the 19th century, Colleges in Controversy. The book was the pioneering study of this difficult and important subject and remains the basic work in the field.

He returned to his native city to take up a position in the history department of Saint Louis University and soon was promoted to academic vice president. Insiders saw him as destined to become the next president of the university, but in 1975 he instead assumed the presidency of the Weston School of Theology in Cambridge, Mass.

At the time, Weston was one of three theological schools in the United States sponsored by the Society of Jesus, primarily for the training of Jesuits. When John arrived there, he found the school in a bad way. It had recently moved from the countryside to Cambridge in order to benefit from an association with Harvard.

No such uprooting occurs without difficulty, and in this case the difficulty was badly compounded by the exciting but disrupting energies released by the Second Vatican Council. The sudden departure from the school (and from the Society of Jesus) of John’s predecessor as president gave the impression of serious disarray.

John took charge with a firm but gentle hand and set to work, as his first task, building up a well-trained faculty, which he accomplished in relatively short order. He communicated to the faculty a vision for the school that he substantiated by concrete measures to accomplish it. In 1976, he received an extremely valuable helpmate when Howard Gray, S.J., became rector of the Jesuit community at Weston and imposed upon it a badly needed structure and discipline. John and Howard worked together as a perfect team.

John Padberg, S.J., was deeply devoted to the Society of Jesus and tried to make actual in his own life the Society’s ideals.

The best measure of John’s success as president at Weston is the current prosperity of the school, now located at Boston College as its School of Theology and Ministry. John saved the school at a critical moment and laid the foundations for its success today.

While at Weston, John served as founding president of the International Conference of Catholic Theological Institutions. He later served as the editor of Studies in the Spirituality of Jesuits from 1986 to 2002 and as founding chairman of the National Seminar on Jesuit Higher Education and editor of its journal, Conversations on Jesuit Higher Education.

After a decade at Weston, John returned to Saint Louis to work with George E. Ganss, S.J., at the Institute of Jesuit Sources, which Father Ganss had in effect founded. As its name suggests, the institute took as its primary mission translations into English of early Jesuit texts and of important modern commentaries on them. In 1971, Ganss himself produced the first translation into English of St. Ignatius’ Constitutions of the Society of Jesus. It was a landmark event that helped shift studies of the Jesuit ethos and spirituality from an almost myopic focus on the Spiritual Exercises and moved it to a broader horizon.

The book was emblematic of the new, text-based approaches to Jesuit history mentioned earlier. It was a complex and rich phenomenon that led to a transformation of the image of St. Ignatius from a disciplinarian and commander-in-chief of papal shock troops to a master of a spiritual wisdom easily adaptable to today. “Ignatian spirituality” was coming into being. This development concurrently brought to the fore the essentially pastoral and cultural ethos of the Society of Jesus itself.

When John Padberg, S.J., died, he took with him a piece of everybody who knew and loved him.

John Padberg was keenly sensitive to what was happening. He had written his dissertation in Paris, which was then the movement’s epicenter. Moreover, his province elected him a member of two crucially important general congregations of the Society of Jesus—the 32nd General Congregation (1974-75) and the 33rd (1983). These congregations were to a large extent official efforts to harness for practical purposes the implications and ramifications of the new vision of the Jesuit charism.

John Padberg’s experience of the two congregations gave shape to his subsequent scholarship at the Institute of Jesuit Sources, where he served for 28 years. He took the history of Jesuit congregations from the very first one in 1558 until those of his own day as his specialty, and he soon became recognized as the world expert on them. In addition to the many books he wrote, John edited Jesuit Life and Mission Today: The Decrees and Accompanying Documents of the 31st–35th General Congregations of the Society of Jesus.

Important as John’s scholarship was, his influence on the lives of those who knew him was just as important. He had a profound influence on me. He persuaded me that Harvard was where I should do my doctorate in history; and, once he became president of Weston, he persuaded me to join the faculty. These were perhaps the two most important and happy decisions of my Jesuit life, and to them I owe almost everything I have been able to accomplish. In the course of our many interactions over the years, John and I became fast friends.

John was deeply devoted to the Society of Jesus and tried to make actual in his own life the Society’s ideals. He succeeded in doing so to a remarkable degree. He was essentially a gentle person, and I never heard from him an unkind word or a complaint about any injustice, real or imagined, that may have been done him. He was warmhearted, unstintingly helpful to those in need, and fun to be with. When he died, he took with him a piece of everybody who knew and loved him.