Prayer and processing: How to talk to our students about mass shootings 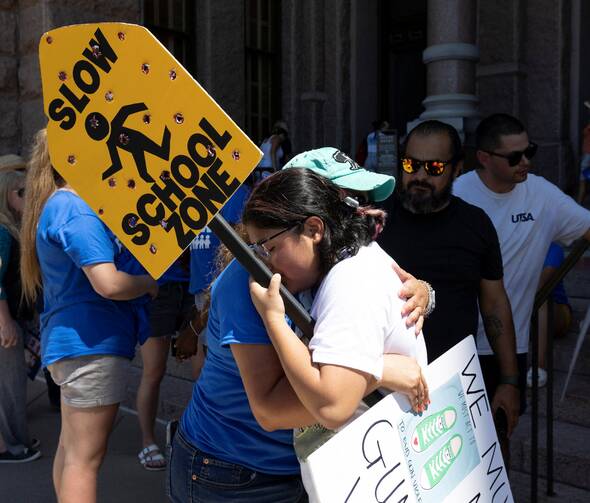 Jazmin Cazares, 17, right, the sister of Jackie Cazares, who was killed in the May 24, 2022, mass shooting at Robb Elementary School in Uvalde, Tex., gets a hug from Mary Morales of Kyle, Tex., during a March for Our Lives rally in Austin, Tex., on June 11. (CNS photo/Nuri Vallbona, Reuters)

How does a young man become radicalized?

Is there a precise moment when he shifts from angry, alienated teenager to sociopathic murderer? Does a switch get flipped? When does he make that decision to kill?

Yesterday’s violence at the University of Virginia was just one more in a long string of mass shootings by young men in the United States. And yet we still don’t always have strategies for how to deal with the possibility or the aftermath of such events.

As a Catholic educator at an all-male high school and someone who spends the majority of his days interacting with teenage boys, I find myself thinking a lot about these uncomfortable questions—and imagining what part my classroom might play in combating such troubling trends toward extremism and violence.

“All these shootings,” said another student, “one after another. I feel like I’m going crazy. Why isn’t anyone doing anything about it?”

When I read the rage-filled manifesto the Buffalo shooter left behind in May, I could see in front of me the horrific role that bad ideas and isolation can play in a young man’s development. His words were a splatter-shot of shared memes, conspiracy theories and racist indoctrination, all of it perpetuated by a proliferation of dangerous, disembodied voices crying out online and in the media. I could almost picture these ideas taking hold of this young man’s lonely mind. Feeding on his wounds, giving oxygen to his resentments, fertilizing his anger. Growing and expanding until they overpowered both his humanity and his capacity for connection.

My thoughts then immediately turn to my own students. Could any of them be capable of something like this?

Never, I quickly think to myself. My students routinely turn in lost money to the front office. They are polite and compassionate. They hold doors and work in soup kitchens. They are Eagle Scouts and altar servers.

At the same time, I would be lying if I said there haven’t been one or two over the past decade I’ve worried about. Quiet, strange, particularly angry young men who have caused me to knock on our school counselor’s door and voice my concern. Even among students about whom I don’t have these larger worries, I would be lying if I said I haven’t felt their emotions becoming more strained and unpredictable over the past three years.

What role can schools play in helping decrease the amount of gun violence we will all have to endure?

Last spring, in the wake of so many consecutive mass shootings, a strange energy enveloped our campus. Underneath the facade of final faculty meetings and grade submissions, our nerves were becoming frayed, our anxiety pushed to the brink. First I noticed more heads resting on desks during my lessons. Some students stopped showering. Video game addiction continued to spiral out of control. Faces were buried in social media feeds before, during and after homeroom. I stopped taking students’ cell phones because it was becoming a full-time job.

Then colleagues of mine began breaking down; in a few instances, it happened in front of their students. I noticed teachers expressing genuine fear of their students, and for the first time in my ten-year teaching career, I had to break up a fistfight in my own classroom.

As graduation approached, it felt like we were all walking on eggshells, tip-toeing our way to the finish line. “Please, God,” we prayed, “just give us the strength to make it to June.”

After the Uvalde shooting, I decided to throw out my curriculum map for a few days and give my students some much-needed space to breathe, share and connect with each other. I started off the conversation simply by asking them how they were holding up.

“Is this a new trend now?” wondered a freshman out loud. “Crazy folks running into places and targeting innocent people? Why does this keep happening?”

“All these shootings,” said another, “one after another. I feel like I’m going crazy. Why isn’t anyone doing anything about it?”

As our conversations progressed, we shared about identity, the role of school in a healthy society and the meaning of friendship, as well as our own struggles with spirituality, religious disaffiliation and mental health.

“I’ve been exposed to so much noise,” noted a junior, “I can’t tell which ideas are mine anymore.”

Other students shared about decreased motivation and repetitive, anxious thoughts. They had questions about God, technology and the very purpose of their lives. They were staying up at night, obsessing about perception, self and truth. Watching YouTube clips, numbing out on entertainment, DMing, posting, liking, scrolling. Anything to keep the demons in their minds at bay.

“If I wanted, I could find horrifying images and racist tirades in less than five minutes,” one of my juniors informed me, holding up his phone to prove his point.

“I could probably buy a gun,” another noted off-handedly. Neither statement surprised me. These young men are exposed to so many harmful ideas, horrific points of view, disturbing images and opinions— it’s no wonder their heads are exploding.

What can the 21st-century educator offer his or her students in the wake of all this violence, anger and hate? What role can schools play in helping decrease the amount of gun violence we will all have to endure?

The best we can do right now is listen. We can give students the space to air out bad ideas, reach insights and stumble on accidental truths. We can set parameters of trust and model compassion. How we go about creating these opportunities for depth and connection, however, will require tremendous risk, self-awareness and courage. To that end, here are three strategies that have worked for me.

Strategy one: Voice your fears.

When I began having these conversations with my students, I was terrified. Would I be punished for veering too far off the lesson plan? Would I say the wrong thing? Offend a parent? Would I get canceled? Fired? I decided that rather than bury my fears, I would come clean about them.

“We’re trying to work out our own ideas,” I said to my students, “we can disagree, we can get upset, but let’s make the commitment that, no matter what our views, we’re going to respect one another. We’re going to give each other the benefit of the doubt, and we’re going to listen to what people have to say.” This can be a counter-cultural, scary proposition. But after several of these conversations, and intense, triggering disagreements about God, gun laws and gender, I have never had a single parent complain. I did, however, receive many more thank you notes from students last spring than in any of my previous nine years as a teacher. What all of them said was some version of “Thanks for caring about us.”

I invited our Director of Diversity to sit in on as many of these classroom conversations as he could. He helped provide the guardrails and ground our conversations, but mostly he helped me feel safe. Watching how he interacted with the students, having countless conversations with him after school, simply seeing him at a desk in the corner of the room—these experiences gave me the confidence to trust the process without trying to control the conversation with my own cautious views and easy, Hallmark-card theology. I had someone in my corner with whom I could process my own anxieties and missteps (and believe me, there were plenty!). Because the safer we feel with each other, the better we can listen.

Saint Teresa of Ávila: “Humility is the ointment of our wounds,” and if we have it, then “the surgeon, who is our Lord, will come to heal us.”

Before each classroom conversation, I would pray silently, asking God to help me listen with compassion, to support the discussion in a spirit of love and tolerance, to grant the boys enough grace to find their own voice and discernment amidst so much cultural static and confusion. In other words, I prayed to stay out of the way.

When you are scared of an outcome, your prayers become a lot more meaningful, and in that expression of humility and powerlessness, our relationship with God becomes much more authentic. For as Saint Teresa of Ávila tells us in The Interior Castle, “Humility is the ointment of our wounds,” and if we have it, then “the surgeon, who is our Lord, will come to heal us.”

That has certainly been my experience.

Amid so much grief and loss, there remains opportunity. An opportunity for young people to understand, at an experiential level, what Catholics mean when we talk about koinonia, communion. As I see it, communion is the only antidote to all this madness, and in the face of apathetic legislation and a corrupt political system, the classrooms of the 21st century might become that necessary safe haven of kinship, depth and understanding in a sea of radical ideas and angry online tirades. A port in the storm of teenage anxiety, isolation and rage.

“You need not be desiring to benefit the whole world,” Teresa once again teaches us, “but concentrate on those who are in your company, and thus your deed will be greater since you are more obliged toward them.” The young men I teach are the souls to whom I am obliged, the community to which I am accountable. And as this demographic continues to be such a worrisome group for our society, I pray for the faith and discernment, the courage and creativity it will no doubt require to create vital spaces of communion and healing. 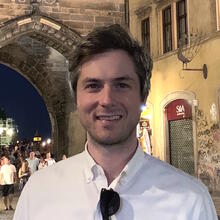 Geoffrey Watson teaches Spanish and World Literature at St. Francis High School in La Cañada, Calif. He is currently enrolled in the Masters in Theology Program at Loyola Marymount University. You can find him on Instagram @geoffwatson_shares.