People, lines and crowds are back from Covid. Here are 3 spiritual tips for keeping your sanity (and sanctity) 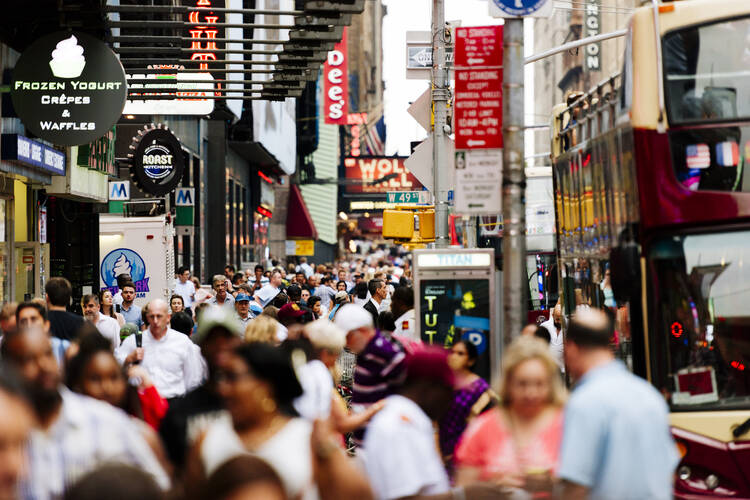 Recently in The New York Times, guest writer Francis Sanzaro wrote a beautiful reflection on the experience of walking. Often we think of walking in terms of what it can deliver us: A reduction of anxiety! An increase in creativity! Our much-vaunted steps!

He says we’ve got it all wrong. The real gift of a walk lies not in what it can do for us, but in allowing ourselves to be swept away by it and letting it give us what it wants. It’s very much the kind of “finding God in all things” idea that we Jesuits love. Still, as I read it I kept thinking, “Sure, the natural world is beautiful. But how do we deal with all the people?”

I live in New York City, which is very much a walking-and-taking-the-subway kind of place. On a Saturday afternoon when I get to amble around Central Park or the Village, people watching and now leaf peeping, that’s wonderful.

“Sure, the natural world is beautiful. But how do we deal with all the people?”

But I dare Mr. Sanzaro to practice mindfulness during the work week in New York, to keep his head up to gaze at anything when people are walking directly at you (sometimes despite the fact that the sidewalk is otherwise empty). How do you savor a hailstorm made of humans, or walk through a seaweed bed of tourists and teenagers on cell phones?

Ask any big city driver about others using exit lanes (or even worse, the shoulder) to try to cut in line in heavy traffic, or my suburban parents about dealing with people and their shopping carts in a Jewel-Osco, and you’ll hear much the same. No matter where you live, we all face so many situations where the people around us are behaving badly, and we respond in kind. The me who walks through Midtown Manhattan is absolutely the worst me there is.

The me who walks through Midtown Manhattan is absolutely the worst me there is.

A year ago at this time things were opening up, but new variations of Covid-19 were heightening our anxieties once again. This year much of that concern has fallen away for now, which almost certainly means we’re all encountering a lot more people. Times Square is probably “more” Times Square than it has been; so, too, driving in Jacksonville or picking your kids up after school. And how are we to deal with that?

I want to see the world in the way that Mr. Sanzaro and St. Ignatius insist is possible. I want to savor the beauty that is all around me, to be a witness to whatever this day will offer me, and all the people in it, too. I want to be surprised. But it’s hard!

Here’s three little spiritual ideas I’ve been thinking about to try and help me get there.

One of the most helpful suggestions I’ve been given about my own experiences walking in New York is to take a step back and see the big picture. Midtown Manhattan (where I work) is a chaotic hellmouth filled with people who are mostly ignoring the needs of everyone else. From the outside that may sound like a judgment, but no, that’s just what it is. It’s the same with the highway in Boston or a grocery store on a Friday afternoon. You wish they were different, but they are what they are.

It’s a pretty good depiction, actually, of what we mean by the “fallen world” or “original sin.” We are each “born” into situations that are fundamentally broken. And because we’re moving through them all the time, eventually they break us, too. Probably every single person that I meet on the sidewalk feels the same frustration that I do, or used to. And now here we all are creating that outrage in each other.

Probably every single person that I meet on the sidewalk feels the same frustration that I do, or used to. And now here we all are creating that outrage in each other.

Facing the truth of a situation doesn’t fix it. But it can put things in a different perspective. You stop being so surprised when someone lays into their horn for a solid minute or refuses to give you any room to move. Maybe some of it even becomes a little bit hilarious. (This is aspirational, clearly. But sometimes it does happen!)

Allow yourself a moment in the mirror

When you’re in a bad situation your options are limited. It may seem ridiculous to describe driving in Northern California as a survival situation, but if you’ve ever been on the freeways there during its evening rush hours, you know that it can really feel that way. It’s the same with malls or airports during the holidays or a hundred other situations.

And so, yeah, you respond in ways that are maybe not so great. You drop your shoulder to make the other person pay for not giving you room to move. You ignore the person who is so very clearly signaling for you to let them into your lane.

You feel justified; sometimes maybe you are. But do I truly never weave down a street typing a text, infuriating everyone around me? Have I never cut in a line while spinning some story about if they really wanted me to respect this line they would have made it more organized? Aren’t there times that I am exactly the person that I am often complaining about?

It’s like a little exorcism: for us to truly be free, God first has to draw out the poison that’s inside us.

It’s always struck me as significant that when people first meet Jesus in the Scriptures, often their first instinct is to attack him. From the outside, we think, these are clearly the bad guys. But even Jesus’ friends reject him at times. And it’s in going through that experience and confronting the ugliness in themselves that they are able to finally become better people.

When we start screaming at another driver, and then catch the look on our kids’ faces in the rearview mirror is a moment of grace. It’s a time when we see a not-so-great part of ourselves more clearly. And with that insight comes a natural desire to behave differently. It’s like a little exorcism: for us to truly be free, God first has to draw out the poison that’s inside us.

Also, sometimes when I realize my own hypocrisy, it gives me a greater sense of humor about getting screwed by other people. It’s like “Touché, universe.” Garbage in, garbage out.

Put something good into the universe

I have a sort of environmentalistic vision of morality. When I say or do bad things, I believe that they have an impact on the broader world I live in. Even if the person I just crossed doesn’t remember me two seconds later, or I gossip about someone who never finds out, on a gut level I believe that toxic actions are pollutants that quietly harm the fabric of things.

Most of the time you can’t fix that kind of damage. You can’t “take back” a well-placed elbow or blare of the horn. But one thing that you can do is put out something else that is good into the universe. I can pay for a stranger’s drink. I can wave someone in front of me to go ahead. I can treat the next person I encounter with warmth. Just as each harsh word or gesture does harm, maybe each moment of kindness or generosity is an act of care for the universe, an attempt to strengthen the fabric of things.

I find that doing this can change my own disposition, as well. If the threat of having to navigate a meteor shower of people creates a sense of pressure within me even before I walk out the door, doing something nice for someone sometimes pops a hole in that anxiety. Suddenly I can breathe again.

We alone can’t fix our realities any more than we can individually stop the poles from melting. Sometimes we can’t fix ourselves, either. Let’s be honest, how long will it be before I’m back to treating a mob of passersby before me like a running back hitting a defensive line? (The truth? It was about 10 minutes after I finished a draft of this article.)

But we can follow up by scattering some seeds of friendship, goodness or just laughter. My God does it help to laugh! And who knows what giant beanstalks may grow.