The Catholic Church has been banning books for centuries. Here’s what it can teach us about censorship today. 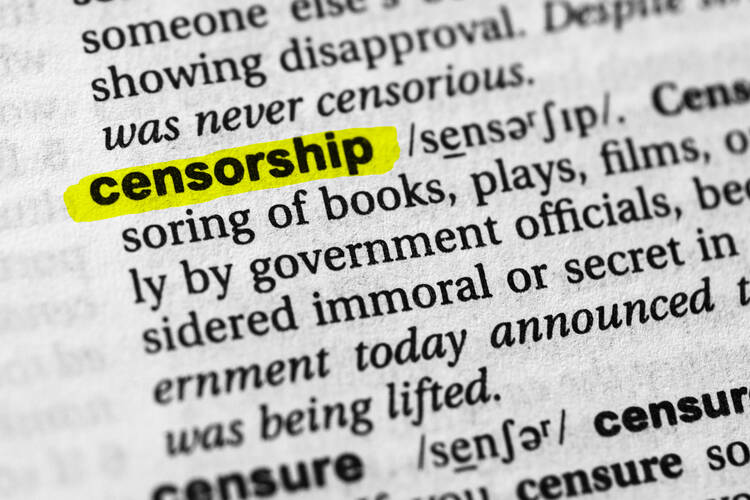 Last fall, the cartoonist Maia Kobabe had the unsettling experience of waking up to find emails waiting from The Washington Post, The Associated Press and elsewhere. Gender Queer, a coming-of-age memoir Kobabe had published years before, had suddenly become the subject of a firestorm at a school board meeting in Fairfax County, Va. “A week later,” Kobabe later wrote in The Washington Post, “I found out that ‘Gender Queer’ had also been banned in a school district in Florida, and within a month, it had been challenged at schools in Rhode Island, New Jersey, Ohio, Washington and Texas.”

Kobabe, who identifies as nonbinary and uses the pronouns e/eir/em, was stunned. “Why are they mad about the book? Because I said nonbinary and trans people exist?” Kobabe wondered. “The book has been out for two and a half years. Why now?”

Groups calling for the censorship of books in libraries and classrooms today would do well to consider the Catholic church’s experiences with censorship.

In 2021, Gender Queer would prove to be the most banned, challenged and restricted book in the United States, according to the American Library Association. 2021 was a particularly bad year for censorship. The A.L.A.’s Office of Intellectual Freedom tracked 729 challenges to public library, school and university material last year involving 1,597 books. That’s five times as many challenges as the year before, and almost six times as many books. It is by far the most challenges the A.L.A. has recorded over the last 20 years.

And 2022 seems likely to be even worse. In the spring, the Florida legislature passed a law giving parents more power in choosing what books are present in their school districts’ libraries. Six other states have similar laws, and five more are considering them. Recent years have also seen an upswing in harassment of teachers and local community librarians.

The Catholic Church is no stranger to the attempt to control what books people are able to read. From 1559 until 1966, we literally wrote the book on condemned texts and authors, often out of the very same instinct to protect the vulnerable that parents and community members are currently expressing. And also much like today, we didn’t hesitate to persecute those who opposed our way of thinking about certain literature. But in the end our practice only revealed the reasons why censorship is a terrible strategy for addressing social and moral concerns. Groups calling for censorship today would do well to consider the church’s experiences.

Today, we see organizations not simply challenging certain books but demanding the banning of whole classes of material, such as L.G.B.T. stories.

Problem One: Censorship tends to get out of control.

Censorship was already very much in the air when Pope Paul IV issued the Vatican’s first Index of Prohibited Books in 1559. The printing press, which had been invented a century earlier, had become the internet of its day, enabling ideas to spread with an alacrity and reach that was previously unimaginable. Some governments, seeing the new capacity of writers to quickly foment opposition to state policies, had begun to demand licenses of publishers and to imprison or execute printers and writers over their work.

The church, too, had been intensely affected by the printing press. As the librarian Robert Sarwak points out: “Without the printing press, for example, the ‘99 Theses’ [sic] of Martin Luther (1517) would have to have been copied out by hand…. Simply put, neither Lutheranism nor Protestant Christianity in general may have ever spread without the printing press.” By the time Pope Paul IV promulgated his Index, churches in some nations had already produced their own lists of forbidden books. The Inquisition was also active in many countries, prosecuting, jailing and sometimes executing anyone it found spoke or wrote heresy.

But Pope Paul’s list would not only condemn individual works; it censored the entire bodies of work of an astonishing 550 authors and dozens of publishers. Even within the church, these moves were considered draconian, so much so that they were often ignored and then officially repealed at the Council of Trent, a few years after Paul died.

Paul’s impulse to go too far is not an isolated incident, either for the church or secular society. Today, we see organizations not simply challenging certain books but demanding the banning of whole classes of material, such as L.G.B.T. stories, and engaging in extreme actions to achieve their goals.

Censorship is like lighting a fire. Once started, it tends to get completely out of control. There is no such thing as burning just one book.

The systematic efforts of the church to annihilate Indigenous cultures in missionary territories were born not of legitimate doctrinal concerns but racism.

Problem Two: Censorship is often a Trojan horse for other agendas.

Looking back on the history of censorship and persecution in the church, we frequently find today that the ideas and authors being suppressed or jailed weren’t actually challenging Catholic doctrine. Astronomer Galileo Galilei was condemned for saying the earth revolved around the sun. French Dominican theologian Yves Congar saw his 1950 book True and False Reform in the Church banned not because it took a heretical position on the divinity of Christ or the real presence, but for simply pointing out that the church as a human institution was capable of getting in the way of God’s grace and needed reform. “The ecclesiastical apparatus might overshadow the action of the Spirit and of grace in people’s lives,” he wrote.

Other forms of church action have functioned similarly. The witch hunts which saw tens of thousands of women persecuted and often murdered by Catholic and Protestant authorities in medieval Europe had nothing to do with the Apostles’ Creed and everything to do with men’s anxiety about the power and sexuality of women. The systematic efforts of the church to annihilate Indigenous cultures in missionary territories were born not of legitimate doctrinal concerns but racism.

And the same problems are to be found in the books people want banned today. Six of the 10 most censored books of 2021 were written by or have as central characters people of color. Roughly half have female protagonists. Looking to prior years, the same patterns persist: The books challenged are often written by people of color, women or members of the L.G.B.T. community, or concern issues of race, gender and sexual orientation.

Those calling for Gender Queer to be banned often cite its graphic depictions of sexuality. But in its 240 pages there is nudity on just a handful of pages and sexual activity portrayed explicitly on only one. Rather than some kind of pornographic comic book, Gender Queer is a heartfelt and often funny story. Kobabe’s journey may not be “the norm,” but the book actually captures the quest to discover oneself in the universe—and how best to love—that every young person embarks on. Rather than a book to censor, it’s the kind of novel that parents could use with older children to help them to talk through their own nascent sense of identity.

“Some people are happy to live in the place they were born,” Kobabe writes on a page with a pretty drawing of mountains, forest and a beach, “while others must make a journey to reach the climate where they can flourish and grow. Between the ocean and the mountains is a wild forest. That is where I want to make my home.”

Six of the 10 most censored books of 2021 were written by or have as central characters people of color. Roughly half have female protagonists.

Things that have gotten the church all hot and bothered at one time have often turned out later to be either no big deal or fundamental to the church’s self-understanding. So Congar’s book, which called for an ecumenical council, inspired Pope John XXIII to convene the Second Vatican Council. Likewise, science that the church once condemned, from cosmology to the theory of evolution, is now accepted as fact.

If the church’s history with censorship has highlighted anything, it is the need for hesitation and humility in the consideration of what constitutes heresy. The stones that the builder rejected have all too often become the cornerstone.

By banning books or arresting and executing thinkers deemed heretical, the church has sometimes succeeded in suppressing those points of view—but only for a time, and at great cost. The fact that the church condemned Galileo did not mean that the idea that the earth revolves around the sun went away; nor did the suppression of the work of theologians like Congar or the Jesuits John Courtney Murray, Teilhard de Chardin and Karl Rahner end their influence. Indeed, at Vatican II their work became foundational to the way the church understands itself.

Today book banning is even more ineffective. People can find anything they want online, and in fact the banning of a book usually only feeds its sales. So in February, as America’s James T. Keane noted, the Holocaust memoir Maus: A Survivor’s Tale returned to best-seller lists again, 36 years after its publication, once the news got around that it was being placed on banned book lists.

Truly, banning books is like kids trying to build a dam in a big river. Their work might divert the water’s course a little bit, but it can’t stop it.

And in the meantime, the activity of those who would ban books often undermines their credibility. The censorship and imprisonment of notable figures like Galileo remains one of the Catholic Church’s greatest disgraces. Even today, such moves continue to be cited as evidence that the church cannot be trusted, that when challenged it always eventually dismisses rational discourse in favor of naked aggression.

In the end, those demanding the removal of certain texts from schools or libraries may succeed for a time. But the history of the church shows that they will not be able to stop those stories from reaching people in their communities. In the end, you can’t stop an idea through censorship. And usually the impulse to try comes out of fear of others, rather than love for one’s own.