R.I.P. Tom Cornell, prophet of peace and lifelong friend of the Catholic Worker 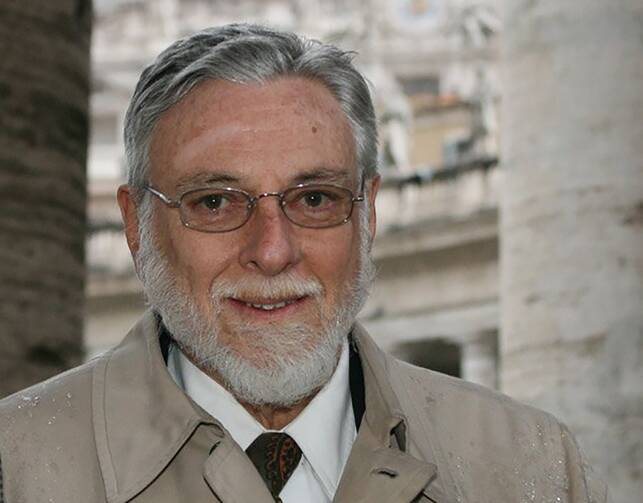 Deacon Tom Cornell is seen at the Vatican March 20, 2007. Co-founder of the Catholic Peace Fellowship and Pax Christi USA and an editor for The Catholic Worker newspaper, Deacon Cornell died Aug. 1, 2022, at age 88. (CNS photo/John Thavis)

Many Catholics today take it for granted that the message of peace was a central teaching of Jesus. Many more probably take for granted the right of Catholics to be conscientious objectors to war. But there was a time when virtually no Catholic in America believed these things. The exceptions could more or less be identified as Dorothy Day and those who had fallen under her influence.

Tom Cornell, who died on Aug. 1 at the age of 88, was certainly in that company. His association with Dorothy Day and the Catholic Worker began when he was a college student in the 1950s and essentially never ended. Joining the New York Catholic Worker community right out of college, he was quickly appointed by Dorothy Day to serve as managing editor of the Catholic Worker newspaper, a job he carried out from 1962 to 1964. In fact, the assignment came about as Dorothy was literally on her way out the door to undertake a “pilgrimage” to Cuba. “You make up the paper,” she told him. Protesting that he had no experience or preparation for such a task, she reassured him: “You’ll figure it out.”

Tom Cornell's association with Dorothy Day and the Catholic Worker began when he was a college student in the 1950s and essentially never ended.

The Worker in those days was virtually alone among American Catholics in proclaiming the gospel message of peace. Tom and a fellow Catholic Worker organized what was probably the first public protest against the Vietnam War, picketing in front of the apartment of the South Vietnamese Observer to the United Nations with a sign reading, “The Catholic Worker protests the U.S. support of Diem tyranny.” Needless to say, that was only the beginning.

In 1964, with fellow Catholic Worker alumnus Jim Forest, Tom co-founded the Catholic Peace Fellowship, the first project that counseled and educated young Catholics about the Catholic basis for conscientious objection. That same year, he was among a select few (including Forest and Daniel and Philip Berrigan) who participated in a peace retreat sponsored by Thomas Merton at his hermitage at the Abbey of Gethsemani. The intention was to explore the spiritual roots of peacemaking. Before the decade was out, many of the participants at that retreat had gone to jail.

Tom was one of the first. In 1965, he joined four other peacemakers in Union Square in New York City, where they publicly burned their draft cards, an act that had only recently been declared a felony. Dorothy Day and the eminent pacifist A. J. Muste were there to support these young people. In his remarks, Tom said, “The grave crime, we are told, is not the destruction of life but the destruction of a piece of paper…. The United States government… has taken upon itself the power to consecrate a piece of paper, invest it with a quality it cannot have, and then exact obeisance for that piece of paper. I can no longer carry that card.” He was convicted and sentenced to six months in jail.

Tom Cornell: "I’m old now; it’s your turn, young people. Pray and study, then get out there!"

Many of us easily cite the inspiration of Dorothy Day or Daniel Berrigan or the writings of Thomas Merton for first introducing us to the peace message of Jesus. But in many ways, behind the scenes, Tom Cornell was truly one of the architects of the American Catholic peace movement. He was a dedicated networker who connected Catholic peace people with their ecumenical counterparts in the Fellowship of Reconciliation (where he worked for many years), the secular War Resisters League and other radical opponents of militarism, with whom he sought common ground.

In 1972, he took part in the gathering that gave birth to Pax Christi USA, and in 1983 he was invited to serve as a consultant to the U.S. bishops’ commission, under Cardinal Joseph Bernardin of Chicago, that produced “The Challenge of Peace,” the prophetic pastoral letter on nuclear war. In this document, the bishops acknowledged for the first time the pacifist stance as a legitimate Catholic position alongside traditional just war theory. For Tom, this signaled the transition of the Catholic Church—not to a pacifist church, but to a “peace church.”

I first met Tom in 1974 when he was working alongside Jim Forest at the Fellowship of Reconciliation in Nyack, N.Y. I was 18, and not then a Catholic, but I was having my own struggles with the draft. He was 40—which at the time seemed as old as Abraham. He gave me a copy of the book he and Jim had edited, A Penny a Copy: Readings from the Catholic Worker, which I thought was incredibly cool. I was in awe of anyone who had written a book, and for that matter, anyone who knew Dorothy Day! But I honestly didn’t know what to make of him, with his references to Thomas Aquinas and his tendency to pepper his speech with Latin phrases. Why would this old guy show such an interest in me?

I would come to recognize as one of Tom’s most endearing qualities his genuine interest in young people, whether that meant sharing stories and history, helping them uncover their own gifts and talents, encouraging them in their vocations or passing the torch onto a new generation. (I feel myself to be remiss in this duty—probably because as long as Jim and Tom walked among us I fooled myself into believing that I was the new generation.) This was a quality, I would discover, that he shared with Dorothy Day. The next year, I too would make my way to the Catholic Worker and serve as editor of the paper. And many years later, with Tom and Jim Forest, I would even co-edit a new edition of A Penny a Copy.

That sense of shared status as fellow graduates of what Jim called “Dorothy Day University” remained a bond between us. In 1997, the centenary of Dorothy’s birth, we were among a dozen people who were invited to meet with Cardinal John O’Connor of New York to discuss the awesome possibility of promoting her cause for canonization. Cardinal O’Connor was genuinely interested in our feelings and uncertain which way to go. But after a couple of very moving sessions, he was convinced.

Among the factors that impressed him was the intense impact Dorothy had made on all those in the room. I remember Tom noting that Dorothy’s radicalism was rooted in faithfulness to the church: “She called on the church to practice its own doctrines.” Tom, who served on the executive committee of the Dorothy Day Guild, lived to see the completion of the work of the archdiocese in 2021, as all the supporting documents and testimonies were gathered up and shipped to Rome.

Tom himself was deeply committed to the liturgical and sacramental life of the church. In 1988, he was ordained as a deacon in the Archdiocese of Hartford. He loved to preach, and many of his sermons focused on the peace message of the Gospels, the works of mercy and the teaching that our very salvation depends on our response to Christ in the poor. And he remained ever embedded in the life of the Catholic Worker.

It was there that he met his wife, Monica Ribar, herself a second-generation Catholic Worker. They raised their children Tommie and Deirdre to embrace their values. Deirdre became a lay missioner, an advocate for migrants and refugees, and a journalist. Tommie joined his parents in helping to manage the Peter Maurin Farm in Marlboro, N.Y., which became Tom’s home for the final decades of his life—not only offering hospitality and a kind of Catholic Worker school, but providing food for the movement’s urban houses.

The farming ideal had always been a glimmer in the eye of Peter Maurin, co-founder of the Catholic Worker—a call to remain close to our roots in the land. But as the world awoke to the themes of ecology and care for the earth, this life on the land took on a new, prophetic meaning. The Catholic Worker themes of hospitality, the works of mercy and peacemaking, now joined by care for the earth, were all vitally connected to the future of this planet, building a culture that sustains life, wholeness and community.

In recent years, Tom fully embraced his status as an elder. Students eagerly gathered around Tom at the farm to hear his stories and to seek inspiration from one who had dedicated his entire life to the cause of peace, and now prepared to pass the torch to a new generation. Though physically diminished by illness and chronic pain, he continued to rejoice in signs of hope. In 2015, Dorothy Day—who at one time was dismissed as a quasi-heretic by many Catholics—was lauded as one of four “great Americans” by Pope Francis on his visit to the United States. The pope himself had become the world’s most prophetic voice for peace, mercy, ecology and care for the poor.

In one of his last articles for the Catholic Worker, Tom wrote: “So let us get to work. The first words I ever heard Dorothy Day speak, 64 years ago: ‘There are great things that have to be done, and who will do them but the young?’ No cause is more noble or more necessary. I’m old now; it’s your turn, young people. Pray and study, then get out there!”

Robert Ellsberg is the publisher of Orbis Books. He has edited five volumes of writings by Dorothy Day, most recently On Pilgrimage: The Seventies.