No, ‘the Jews’ did not kill Jesus 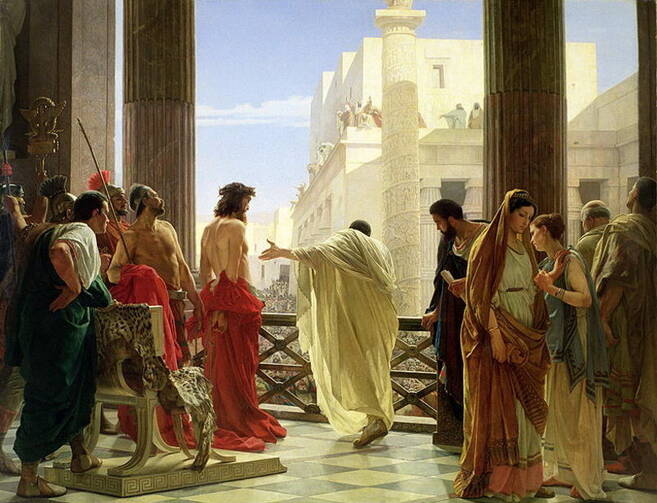 A Reflection for the Friday of the Fourth Week of Lent

“Jesus moved about within Galilee;
he did not wish to travel in Judea,
because the Jews were trying to kill him” (Jn 7:1).

Over the last few years, I’ve been writing a book about the story of the raising of Lazarus, as recorded in John’s Gospel. Some of the chief characters in that beautiful story are “the Jews” (“oi Ioudaioi”in Greek). Though “the Jews” are described as friends of Lazarus’s sisters Martha and Mary and grieve over Lazarus’s death, in John’s Gospel they are often portrayed in the most negative of terms (as they are in today’s readings), with “the Jews” trying to kill Jesus.

We may be so used to this term in John’s Gospel that we overlook how odd it is to read. After all, John understood that Jesus and his disciples (not to mention Jesus’s mother and extended family) were Jews themselves. And elsewhere in his Gospel, John has Jesus say to the Samaritan woman at the well, “Salvation comes from the Jews.”

One of the most helpful books in understanding Jesus’s Jewish background is Amy-Jill Levine’s The Misunderstood Jew: The Church and the Scandal of the Jewish Jesus. In this scholarly but accessible book, Professor Levine, who teaches New Testament and Jewish studies at Vanderbilt University, examines not only the effect of passages like today’s Gospel in which “the Jews” are cast as villains, but also the variety of Jewish beliefs and practices in Jesus’ time, as well as, crucially, the lazy stereotypes that theologians and preachers have passed on in the laziest of ways. For example: Jews were obsessed with purity laws and distancing themselves from the outsider, unlike Jesus who swept aside the laws and loved everyone. Or Jewish Law was impossible to follow and a burden that no one could bear. Finally, one you’ve probably heard before from the pulpit: All Jews wanted a “warrior messiah” who would defeat Rome, therefore “the Jews” rejected Jesus because he was a peacemaker.

Confronting anti-Jewish stereotypes is especially important as we move closer to the Passion narratives, in which there is a complex interplay between “the Jews” and the Roman authorities.

Confronting these stereotypes is especially important as we move closer to the Passion narratives, in which the complex interplay between “the Jews” (including individuals like Caiaphas and Annas, as well as groups like the Pharisees, scribes and Temple authorities) and the Roman authorities (primarily Pontius Pilate) have given rise to questions about the responsibility for Jesus’s crucifixion. The straightforward answer is the Romans, since only they had the authority to put a person to death, in this case Jesus. Yet centuries of Bible commentaries about the role of “the Jews,” especially in John’s Gospel, gave rise to centuries of deadly sentiments of anti-Judaism (against the Jewish religion) and anti-Semitism (against the Jewish people themselves).

It’s essential as we read today’s Gospel and, later on, the Passion narratives to remember the words of the Second Vatican Council’s beautiful document “Nostra Aetate”: “In her rejection of every persecution against any man, the Church, mindful of the patrimony she shares with the Jews and moved not by political reasons but by the Gospel’s spiritual love, decries hatred, persecutions, displays of anti-Semitism, directed against Jews at any time and by anyone.”

Get to know James Martin, S.J., editor at large

What are you giving up for Lent?
During Lent, I always try to be kinder. I hope I’m that way throughout the year, but especially at Lent I make an effort. So I guess you could say I am giving up being unkind.

Do you cheat on Sundays?
No way. Not to be overly censorious, but if you’re going to do something good for Lent, Sunday is about the last day to cheat! That goes for St. Patrick’s Day, too: What do you think St. Patrick would tell you?

Favorite non-meat recipe
Some good lentil soup. It’s pretty hard to mess that one up, too. At the Greek Kitchen, a great (and inexpensive) restaurant a few blocks away from my Jesuit community, they have a wonderful lentil soup with, improbably, a kind of lemony flavor. That plus a nice Greek salad will fill you up and satisfy any of your Lenten fasting goals.

Favorite Easter artwork
I’ve always loved Murillo’s “Resurrection of the Lord,” where the Risen Christ is almost exploding out of the tomb. The soldiers, however, are fast asleep. To me, it’s an image not only of the power of Christ over death, but also how we sometimes miss what’s right in front of us.

Favorite Easter photo
Happy Easter from my sister Carolyn and me, circa 1970.