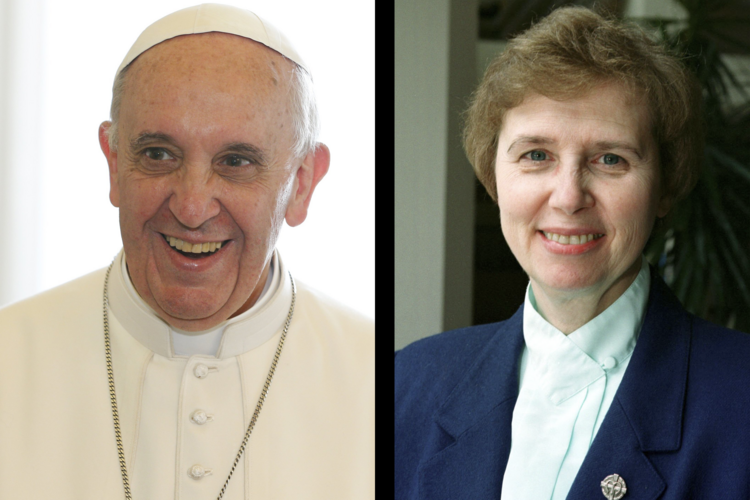 In another sign of support for L.G.B.T. Catholics and those who advocate on their behalf, Pope Francis sent a handwritten letter on Dec. 10 to Jeannine Gramick, S.L., the co-founder of the Catholic apostolate New Ways Ministry.

Sister Gramick is celebrating 50 years of working with and advocating for L.G.B.T. people. Noting her anniversary as the reason for his letter, the pope congratulated her in Spanish on “50 years of closeness, of compassion and of tenderness” in a ministry that he described as being in “‘the style’ of God.”

In another sign of support for L.G.B.T. Catholics and those who advocate on their behalf, Pope Francis sent a handwritten letter on Dec. 10 to Sister Jeannine Gramick.

Pope Francis’ letter to Sister Gramick is the latest in a series of letters from the pope written to gay Catholics and others who are serving and advocating for L.G.B.T. people.

In his letter, the pope praised Sister Gramick for her willingness to suffer for love’s sake. “You have not been afraid of ‘closeness,’” he wrote, “and in getting close you did it ‘feeling the pain’ and without condemning anyone, but with the ‘tenderness’ of a sister and a mother.”

[Interview: Sister Jeannine Gramick on being censured by the Vatican, 50 years of ministry and her hopes for LGBT Catholics]

“Thank you, Sister Jeannine,” the letter concluded, “for all your closeness, compassion and tenderness.”

Almost from the start of their work in New Ways Ministry, Sister Gramick and New Ways Ministry co-founder Robert Nugent, S.P.S., were met with resistance by church authorities for the programs they offered throughout the country, which educated Catholics about the science, sociology and theology of homosexuality. Some bishops in the United States pressured Sister Gramick’s superiors to remove her from the ministry.

“Thank you, Sister Jeannine,” the pope’s letter concluded, “for all your closeness, compassion and tenderness.”

When they declined to do so, the Congregation for the Doctrine of the Faith launched an 11-year investigation that ended in a notification, which stated that Sister Gramick and Father Nugent’s presentations on homosexuality did not accurately represent “the intrinsic evil of homosexual acts and the objective disorder of the homosexual inclination,” and banned the two from any pastoral work related to L.G.B.T. people.

A year later, Sister Gramick described her experience with the Vatican as akin to that of a battered woman. In response to Vatican demands that she stop talking about the investigation, she replied, “After finding my voice to tell my story, I choose not to collaborate in my own oppression by restricting a basic human right.” Sister Gramick ended up leaving her original religious community, the School Sisters of Notre Dame, and joining the Sisters of Loretto in order to continue her ministry.

Just last month, after the Vatican’s General Secretariat for the Synod of Bishops removed a link to a webinar hosted by New Ways Ministry from its website, New Ways revealed that Pope Francis had written them two letters earlier this year praising their ministry. The link was later restored. In those letters, Francis, writing about Sister Gramick, acknowledged that he knew “how much she has suffered,” describing her as “a valiant woman who makes her decisions in prayer.”

“After finding my voice to tell my story, I choose not to collaborate in my own oppression by restricting a basic human right.”

Sister Gramick told America that many Catholics will read the arrival of these letters as an institutional affirmation of her ministry. She noted that it is going to be more difficult for bishops and other Catholics “who do not appreciate the work of New Ways Ministry to make derogatory remarks.”

Earlier this month, Francis DeBernardo, the executive director of New Ways, speaking about the pope, similarly said, “We do believe he wants L.G.B.T.Q. people speaking.”

But Sister Gramick resists the idea that this letter represents some kind of “rehabilitation” of her life or ministry because she has always understood herself as doing the work of the church. “I always felt like the Holy Spirit was guiding me,” she explained.

“I felt wonderful, of course,” Sister Gramick said of receiving the handwritten letter. “But the Scripture that came to me was from John: ‘I do not call you servants, I call you friends.’

“That’s how I felt, like I was getting a letter from a friend,” she said. “I think that’s how Pope Francis wants us to live. And it’s what I hope we would be as a people of God: a community of friends.”

[For more on Sister Gramick’s 50 years of work with L.G.B.T. people, check out America’s exclusive new interview with her.]

Full Text of the Letter

Many thanks for your letter. It made me happy to receive the news about your 50th anniversary.

Your letter reminded me of “the style” of God... God has his own style to communicate with us. And we could summarize that style in three words: closeness, compassion, tenderness.

And I am thinking of your 50 years of ministry, which were 50 years with this “style of God,” 50 years of closeness, of compassion and of tenderness.

You have not been afraid of “closeness,” and in getting close you did it “suffering with” [compassion] and without condemning anyone, but with the “tenderness” of a sister and a mother.

Thank you, Sister Jeannine, for all your closeness, compassion and tenderness.

I pray for you. Please do not forget to pray for me. Greetings to Yayo (Obdulio).

May Jesus bless you and the Holy Virgin protect you.

Correction, Jan. 11: The religious order known as the Sisters of Loretto was initially misspelled in this article.