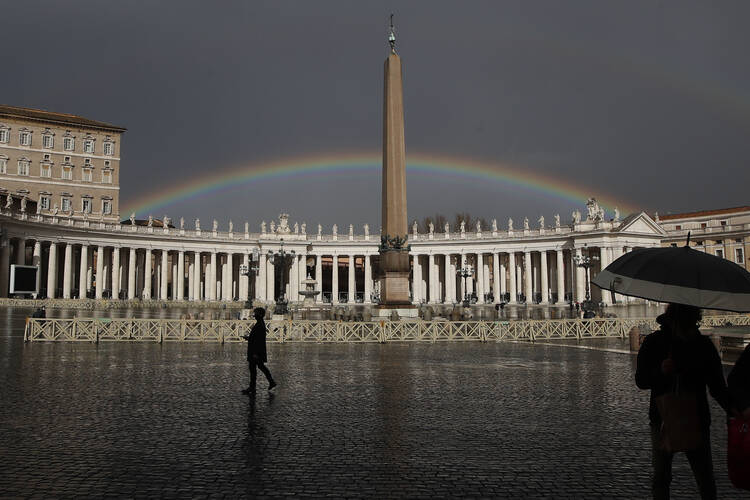 A rainbow shines over St. Peter’s Square at the Vatican, on Jan. 31, 2021. (AP Photo/Alessandra Tarantino, File)

ROME (AP) — A Vatican official apologized to a leading Catholic L.G.B.T.Q. advocacy group for having yanked a reference to it on the Vatican website, drawing immediate praise Monday from the group as a “historic” move to repair the painful rift between the Catholic hierarchy and the gay community.

The Vatican’s General Secretariat for the Synod of Bishops, which is organizing a two-year consultation of rank-and-file Catholics ahead of a 2023 meeting of bishops at the Vatican, restored the reference to New Ways Ministry on the website over the weekend.

The Synod had originally included a reference to a webinar video made by New Ways Ministry, a U.S.-based organization that advocates for greater acceptance of gays in the Catholic Church, in its “Resources” page directing people to sources of information about the Synod. The video urged L.G.B.T.Q. Catholics to participate in the consultation process, which aims to make the Catholic Church more welcoming, responsive to the laity and less centralized.

The Vatican’s General Secretariat for the Synod of Bishops restored the reference to New Ways Ministry on the website over the weekend.

Other U.S. resources alongside it were the U.S. Conference of Catholic Bishops and the archdioceses of Boston and Newark.

But the New Ways Ministry reference was taken down earlier this month without explanation. Suspicion fell on the U.S. bishops conference, which has long kept New Ways Ministry at arms’ length. Catholic doctrine holds that gays must be treated with dignity and respect but that homosexual activity is “intrinsically disordered.”

Reversing course, the Synod’s communications director, Thierry Bonaventura, restored the online reference and said he wanted to apologize “to all LGBT and to the members of New Ways Ministries for the pain caused” by taking down the video. He urged them to contribute their reflections on the consultation process.

“In walking together, sometimes one may fall, the important thing is to get back up with the help of the brothers and sisters,” he wrote in the Synod’s newsletter. Bonaventura confirmed the statement to The Associated Press on Monday.

The apology drew immediate praise from New Ways Ministry, which warmly accepted what it called an “historic” acknowledgment from the church of “the harm that such a slight would have caused LGBTQ people and the entire church.”

“Apologies are powerful in their ability to build bridges of reconciliation and justice,” said the group’s executive director, Francis DeBernardo. Praising Bonaventura by name, he said such actions “are an example of the amazing grace which can be brought to life when one practices honesty and humility, and is concerned about how one’s actions may harm other people.”

“Vatican officials rarely apologize, and they almost certainly have never apologized to LGBTQ people or an LGBTQ Catholic ministry,” the executive director of New Ways Ministry said in a statement.

“Vatican officials rarely apologize, and they almost certainly have never apologized to LGBTQ people or an LGBTQ Catholic ministry,” he added in a statement.

The flip-flop on the reference to New Ways Ministry on the Synod website is indicative of the mixed messages the Holy See over the years, and Pope Francis himself, have sent about the Vatican’s position on gays and their place in the church.

Francis made international headlines in 2013 when he quipped “Who am I to judge?” about a purportedly gay priest. He followed up over the years with unprecedented gestures of papal outreach to the gay and transgender communities, and, while archbishop of Buenos Aires, supported extending legal protections — but not marriage — to gay couples in stable relationships.

But he has also upheld official church teaching and consented earlier this year to the publication of a document from the Vatican’s doctrine office asserting that the Catholic Church cannot and will not bless same-sex unions since God “cannot bless sin.”

In the aftermath of the Synod’s original removal of the webinar video, New Ways Ministry revealed that Francis had written the group two letters this year commending its work. That was significant since the Vatican’s doctrine office in 1999 formally censured New Ways Ministry’s two founders for refusing to accept the church’s complete teachings on homosexuality.

In one of the letters, which were first reported by National Catholic Reporter, Francis praised one of the co-founders, Sister Jeannine Gramick, as “a valiant woman” who had suffered for her ministry.

In the statement Monday, DeBernardo said the letters make clear “that Pope Francis wants LGBTQ ministry to thrive” and that the turnaround on the Synod meant that the Vatican wanted to hear from gay Catholics.