Most U.S. Catholics believe the Eucharist is just a symbol. The bishops want to change that. 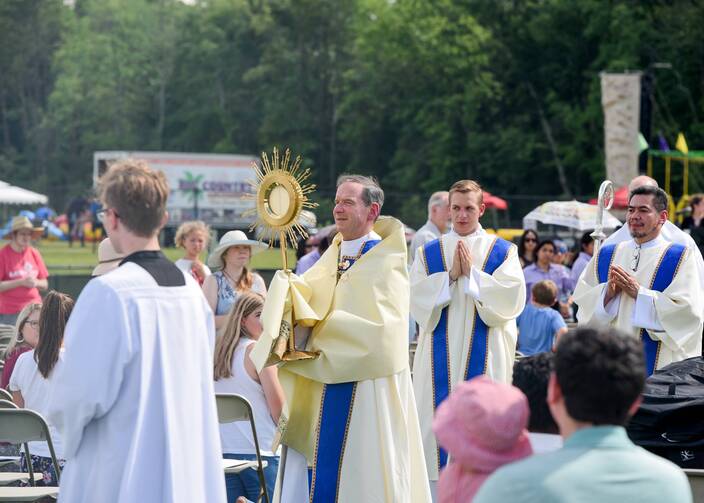 WASHINGTON (CNS) — Toni Guagenti of Virginia Beach, Virginia, was raised in a traditional churchgoing Catholic family and educated in the teachings of the church, yet as an adult she views the consecrated host as a symbol of Jesus and not the real presence of Christ.

It appears as though Guagenti’s understanding of the Eucharist is the same for a majority of U.S. Catholics, and church leaders are trying to figure out what to do about that.

A 2019 Pew Research Center study showed that 69 percent of all self-identified U.S. Catholics said they believed the bread and wine used at Mass are not Jesus, but instead are “symbols of the body and blood of Jesus Christ.” The other 31 percent said they believed in the real presence of Jesus in the Eucharist.

Though that study has been criticized by several Catholic scholars, it got the attention of the U.S. bishops, who will be discussing what they consider a catechetical crisis at their upcoming fall general assembly in Baltimore in November.

A 2019 Pew study showed that 69 percent of all self-identified U.S. Catholics said they believed the bread and wine used at Mass are not Jesus, but instead are “symbols of the body and blood of Jesus Christ.”

“I think it shows a lack of catechesis over at least two generations now of people,” said Bishop Alfred A. Schlert of Allentown, Pennsylvania. “Also, when we look at the amount of people who are not practicing their faith, who have left the church and really have become a nondenominational person in any respect, I think that would be really emblematic of why the number is so high.”

Guagenti grew up one of eight children in a Lima, Ohio, household where her parents were actively involved in their parish and the religious education of their children.

“We would fill a pew,” she said in referring to the Guagenti family’s church life, “so it was very much a part of my family, my extended family, my cousins. It was woven in the fabric of our family.”

Before receiving her first Communion, Guagenti said, she was provided with detailed instruction about church teaching on the real presence of Christ in the Eucharist and said that education continued throughout the rest of her childhood.

That instruction would have included the church doctrine of transubstantiation during which the bread and wine have changed their substance from what they fundamentally are—through the instrument of the ordained minister’s words of consecration—to the total and real presence of Jesus Christ, that is his body and blood.

“We were taught pretty strict what the Eucharist meant,” Guagenti said, meaning she learned that “it is the body of Christ. This is very sacred. You have to feel like you deserve that you are able to take this pure peace of the Lord into you.”

Though Guagenti did believe in the real presence of Christ in the Eucharist throughout her childhood and adolescence, her acceptance of transubstantiation changed in adulthood.

“It’s like Santa Claus, OK, we sort of know eventually he doesn’t exist, but you still believe in the spirit of the giving,” she said. “It’s pretty impossible to me that millions of churches across the world have the actual body of Christ. The bread is sanctified, it’s consecrated by those who are living the word, breathing the word, teaching the word of Christ. That’s good enough for me.”

This view of the Eucharist has alarmed many U.S. bishops because belief in the real presence of Christ in the consecrated host is a central church teaching.

“This should be a wake-up call to all of us in the church,” Bishop Robert E. Barron said. “We need to pick up our game when it comes to communicating even the most basic doctrines.”

Auxiliary Bishop Robert E. Barron of Los Angeles—a high-profile church leader who is the founder of the Catholic evangelization organization Word on Fire and host of an award-winning documentary about the Catholic faith that aired on PBS stations—didn’t mince words about the Pew study.

“It’s hard to describe how angry I feel,” he said on his website just after the study was released, saying he blamed himself, his brother bishops, other priests, catechists and parents, really anyone else responsible for spreading the faith.

He was among the first church leaders to call this a crisis in catechesis.

“This should be a wake-up call to all of us in the church,” Bishop Barron said. “We need to pick up our game when it comes to communicating even the most basic doctrines.”

The study prompted the U.S. bishops to plan a three-year eucharistic revival to help address what they see as a catechetical crisis and perhaps one of many reasons why so many churches have fewer members in their congregation with each passing year.

It’s also one of the driving forces behind the U.S. bishops’ proposed document on the “The Mystery of the Eucharist in the Life of the Church,” even though some bishops would like the document to clearly say Catholic politicians who support abortion should be denied Communion.

Guagenti no longer attends Mass on a regular basis and said when she does attend a wedding or funeral, she doesn’t present herself for Communion.

“I think it’s just because I’m not putting in the time at church and I feel like that the Lord and God deserve that respect when you’re there,” she said. “So, I don’t want to belittle the sacrifices that he made for us.”

John Grabowski, an associate professor of moral theology and ethics at The Catholic University of America, found Guagenti’s reverence for the Eucharist striking, considering her lack of belief in the Real Presence.

“But it’s probably not isolated,” Grabowski said. “People who have grown up in Catholic families, in Catholic education, who have Catholic habits of mind and practice, even if they don’t have a strong, personal faith at a given point in their lives, those habits are still there at some level and still kind of directing the way they operate and navigate.”

He hopes the U.S. bishops’ three-year eucharistic revival takes hold in parishes and small groups of people throughout the country.

“I am hoping that we can move the needle in a significant way so that more than just one third of Catholics in the United States recognize the real presence of Christ in the Eucharist,” Grabowski said.

Chaz Muth - Catholic News Service
Show Comments ()
Join the conversation: Login or create an account
Before you can comment, you need to update your profile to include your first and last name, as required in our comments policy. Then reload this page and you'll be set up for commenting. Update your profile