Explainer: So, what exactly is a synod? 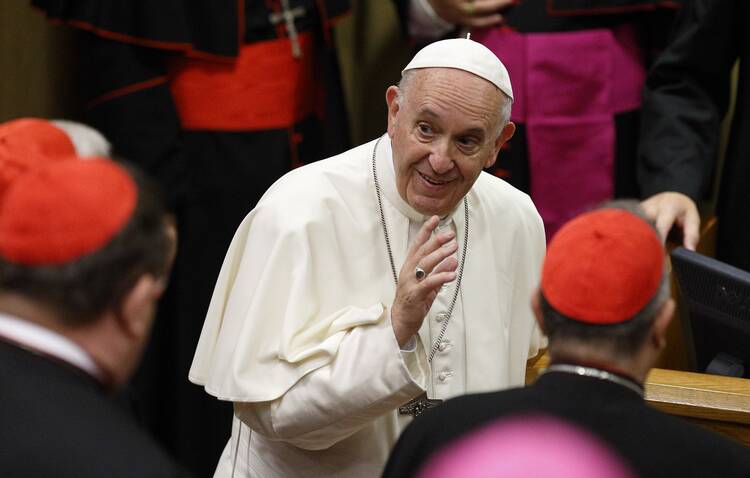 Pope Francis waves as he arrives for a session of the Synod of Bishops on young people, the faith and vocational discernment at the Vatican Oct. 9. (CNS photo/Paul Haring)

The global synodal process on “Communion, Participation, and Mission” that the Catholic Church is undertaking over the next two years will formally kick off on Sunday, Oct. 10, with a Mass at the Vatican. It has been nicknamed the “synod on synodality”—a term that, despite Pope Francis’ efforts to popularize it, may still leave some scratching their heads.

So what is “synodality,” and why does the pope think it’s such a big deal?

What is a synod?

To understand synodality, we first need to understand what a synod is. Simply put, a synod is a meeting or assembly of church leaders. The idea of a synod has New Testament roots in Acts 15. In several Protestant denominations, synods exist on various levels—local, regional and national; in some cases, like the Lutheran Church Missouri Synod, it describes the entire church. Eastern and Oriental Orthodox Churches have used synods for centuries to gather bishops and laypeople to reach consensus on important issues, similar to the way that the Roman Catholic Church has used ecumenical councils like Vatican II.

In his book Inside the Vatican, Thomas Reese, S.J., recounts how synods caught on in the Catholic Church:

The bishops who attended Vatican II liked the experience of having a role in the governance of the universal church and looked for ways to continue this after the council...and Melkite Patriarch Maximos IV suggested a synod of bishops, modeled on those of the Eastern churches, that would be “the supreme...executive and decision-making council of the worldwide church. All the Roman departments must be subject to this.” Before these discussions could mature, Paul VI issued a document creating the synod of bishops with a much more limited scope.

Pope Paul VI’s model was a standing body of bishops who were elected by their national or regional bishops’ conferences. It would ordinarily meet every four years to discuss important church issues, with the pope occasionally calling “extraordinary synod” meetings to consult on issues that required immediate attention. Unlike the Protestant, Eastern and Oriental synods, the Catholic synod of bishops does not have the power to make binding decisions; it is purely a consultative body for the pope, who makes the final calls.

When Pope Francis took office, he acknowledged that the synod of bishops was “half baked” compared with the broad vision of collegiality hoped for by the Vatican II bishops. To jump-start that collegiality, he appointed a council of nine cardinals to advise him and suggested that those cardinals might one day be elected by the synod of bishops, although that has not yet happened.

He also has held extraordinary synods, like those on the family, young people and the Amazon, more often than previous popes. The scope of extraordinary synods has also expanded under Pope Francis: Before each gathering, he has urged bishops to hold local listening sessions in their dioceses, and he has invited more laypeople to participate in the bishops’ meetings in Rome.

“Synodality” refers to the way that these synods make decisions. It is a model that includes listening to a broad range of people and then discussing the issues together with the goal of hearing where the Holy Spirit is calling the church. Practically, Pope Francis has said, this means not entering the discussion with the idea that there will be “winners” who get their way and “losers” who do not but leaving agendas at the door, speaking with parrhesia (a Greek word that appears in the New Testament and means “frankness,” “boldness” or “courage”), listening humbly and being open to others’ ideas. In theory, no topic is off-limits, and disagreement is welcome.

After the discussions, the bishops of the synod draft a document and vote, paragraph by paragraph, to approve it. The pope uses that document to inform his decisions following the synod.

Synodality is a model that includes listening to a broad range of people and then discussing the issues together with the goal of hearing where the Holy Spirit is calling the church.

Ultimately, the goal is to reach a consensus, which does not always mean the idea that most people support will be embraced by the pope. For example, during the Synod on the Amazon, the majority of bishops voted in support of allowing married men to be ordained priests in order to ameliorate the priest shortage in the region. Pope Francis chose not to go forward with approving the proposal because, as he revealed in a personal note to the Jesuit journal La Civiltà Cattolica, he believed the majority decision did not reveal a true consensus reached through prayerful discernment.

“There was a discussion...a rich discussion...a well-founded discussion, but no discernment, which is something different from arriving at a good and justified consensus or relative majority,” he wrote. “We must understand that the Synod is more than a parliament; and in this specific case it could not escape this dynamic.”

Making decisions “synodally” is a top priority for Pope Francis. In a speech celebrating the 50th anniversary of the establishment of the synod of bishops, the pope said, “It is precisely this path of synodality which God expects of the Church of the third millennium.” He would like to see this type of decision-making not only among the bishops meeting in Rome but “at every level of the Church’s life,” beginning with the laity (the “people of God”), then the pastors, the bishops and finally, the pope.

While critics believe that the pope’s role as the final decision-maker limits the ability of the synod to make decisions, especially when the pope’s decisions run counter to the synod’s recommendations, Pope Francis sees it as more of a “discerner in chief” role. It “is not a limitation of freedom, but a guarantee of unity,” the pope said.

Why hold a ‘synod on synodality’?

It is clear that Pope Francis still thinks there is a long way to go before the church is making decisions “synodally” at every level. In fact, it is difficult to even imagine what that may look like. As the papal biographer Austen Ivereigh wrote in Commonweal, “A Church accustomed to a command-and-control model does not adapt easily to synodality.”

With his plans for a two-year “synodal process” focusing on synodality, Pope Francis seems to have decided that the best way for the church to figure out what synodality means in practice is to try it out.

The process “For a Synodal Church: Communion, Participation, and Mission” will begin with a diocesan listening phase from October 2021 to April 2022, followed by a continental phase from September 2022 to March 2023 and a final “universal church phase” that will look more like past synod meetings in the Vatican in October 2023. It is reasonable to expect that Pope Francis will follow the document with an apostolic exhortation outlining his takeaways and decisions from the synod a few months later, as he has done for previous synods.

[Related: Pope Francis: The People of God must be consulted before the October 2023 synod of bishops]

Will this process completely overhaul the church’s top-down decision-making? It isn’t likely. But by pulling the entire church into this participative process, Pope Francis aims to give Catholics an experience of a church that comes together instead of fragmenting, that discerns together instead of making decrees in isolation and that walks together (how the verbal form of the Greek word for “synod” is used in the New Testament).

That process will likely be messy. It is different from what most Catholics are used to, and by its nature involves disagreement. But it also involves mutual listening, courage, humility and respect—all virtues that today’s church could stand to grow in.