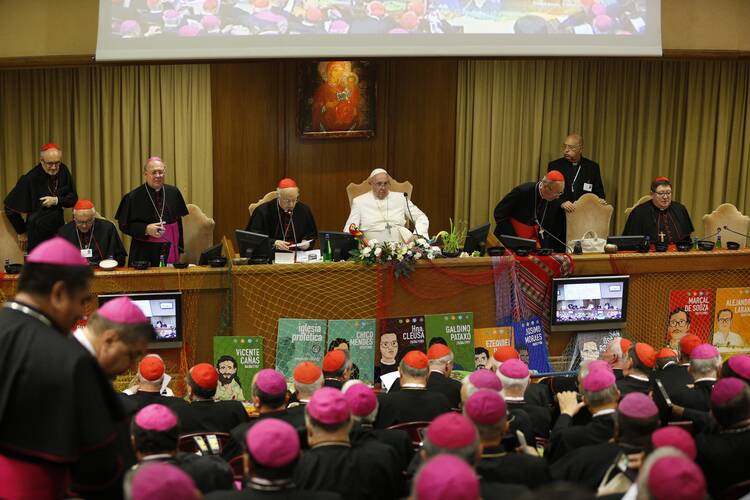 Pope Francis attends the final session of the Synod of Bishops for the Amazon at the Vatican in this Oct. 26, 2019, file photo. (CNS photo/Paul Haring)

Continuing his efforts to reform the Catholic Church in accordance with the teachings of the Second Vatican Council, Pope Francis has approved a new three-stage process for the next gathering of the synod of bishops. Its aim is to involve the whole church at diocesan, national and continental levels through a process of “listening and discernment” on the important theme of synodality: “For a synodal Church: communion, participation and mission.”

Pope Francis has decided that the synod will open in the Vatican and in every diocese throughout the Catholic world in October 2021. It will first go through a “diocesan phase” (October 2021 until April 2022) and subsequently a “continental phase” (September 2022 through March 2023) before concluding in “the universal church phase” at the Vatican with the synod of bishops in October 2023.

Originally scheduled for October 2022, it has been postponed for a year not only because of the pandemic but also to allow time for “mutual listening” and discernment in local churches at the diocesan and continental levels.

“Synodality refers to the very essence of the Church, her constitutive reality, and is thus oriented towards evangelization. It is an ecclesial way of being and a prophetic example for today’s world.”

Cardinal Mario Grech, the Maltese-born general secretary of the synod of bishops, has informed all the conferences of bishops, through the nunciatures, as well as the international unions of women and men religious superiors and other relevant bodies, of this new process, since its success will require their full involvement and commitment.

In his letter to the bishops, Cardinal Grech recalled that on Oct. 17, 2015, in a keynote address on the 50th anniversary of the institution of the synod of bishops by Pope Paul VI, Pope Francis said, “It is precisely this path of synodality which God expects of the Church of the third millennium. What the Lord is asking of us is already in some sense present in the very word ‘synod.’ Journeying together—laity, pastors, the Bishop of Rome—is an easy concept to put into words, but not so easy to put into practice.”

The cardinal reminded the bishops that “synodality refers to the very essence of the Church, her constitutive reality, and is thus oriented towards evangelization. It is an ecclesial way of being and a prophetic example for today’s world.”

He recalled that Pope Francis, in the above-mentioned address, declared that the synod of bishops is “the dynamic point of convergence that calls for mutual listening to the Holy Spirit at every level of the church’s life.”

Cardinal Grech said, “The synod is not just an event, but also a process that involves in synergy the People of God, the college of bishops and the Bishop of Rome, each according to their proper function”

In an interview with Vatican Media, the cardinal explained that “the first and greatest innovation is the transformation of the synod from an event into a process,” as now each assembly of the synod develops in successive phases: the “preparatory phase, the celebratory phase, and the implementation phase.” He emphasized that the purpose of the first phase is the consultation of the People of God. He recalled that the Second Vatican Council (1962-65) “teaches that the People of God participate in the prophetic office of Christ” and “therefore, we must listen to the People of God, and this means going out to the local churches.”

“The governing principle of this consultation of the People of God is contained in the ancient principle ‘that which touches upon all must be approved by all.’”

He explained that “the governing principle of this consultation of the People of God is contained in the ancient principle ‘that which touches upon all must be approved by all’ (Quod omnes tangit ab omnibus approbari debet).” But, he added, “this is not about democracy, or populism or anything like that. Rather, it is the Church that as the People of God, a People who by virtue of baptism, is an active subject in the life and mission of the Church.”

In his letter to the bishops, sent on May 20, he outlined “the new method” that Francis approved on April 24 and is articulated in three phases that follow the official opening by the pope in the Vatican on Oct. 9, 2021. The synod will be opened by the local bishop at a similar celebration in each of the more than 5,000 Catholic dioceses on all continents.

The aim of the diocesan phase is “to consult the people of God, so that the synodal process is carried out through listening to all the baptized,” who, as the Second Vatican Council said, “cannot err in matters of belief.”

He said the general-secretariat will send the bishops a preparatory document, accompanied by a questionnaire and a vademecum (handbook or manual) with proposals for consultation in each local church.

The diocesan consultation will conclude with a moment of discernment, after which the local church will send its contribution to the bishops’ conference. The conference will then hold an assembly and engage in a period of discernment on the inputs that have come from the dioceses, after which they will produce a synthesis and then send it to Rome.

The pope‘s aim is to involve the whole church at diocesan, national and continental levels through a process of “listening and discernment” on the important theme of synodality.

Cardinal Grech said the purpose of the continental phase “is to promote dialogue at the continental level about the text of the Working Document and deepen discernment within the specific cultural context of each continent.” Each of the continental assemblies will conclude their discernment by drafting a final document that it will send to the general secretariat in Rome, which will then draft a second working document before June 2023 that will be sent to all the participants of the October 2023 synod of bishops.

In the interview with Vatican media, Cardinal Grech recalled that “synods were a typical practice of the first-millennium Church, a practice that continued in the Orthodox Church.” He said, “The novelty in the Catholic Church is that synodality re-emerges as the crowning of a long process of doctrinal development. Synodality helps advance and clarify our understanding of Petrine primacy at Vatican I, collegiality at Vatican II, and today through a progressive reception of conciliar ecclesiology, especially Chapter II of ‘Lumen Gentium’ on the People of God, expressing the way which synodality is a modality for everyone to participate in the journey of the Church.”

He described this as “a great vision, which unites the tradition of the Eastern and Western Churches, giving to a synodal Church that principle of unity that was lacking even in the Church of the Fathers, when the function of unity was exercised by the emperor!”

“From this synodal journey,” he said, “we can also expect with confidence great fruits on the ecumenical level.”