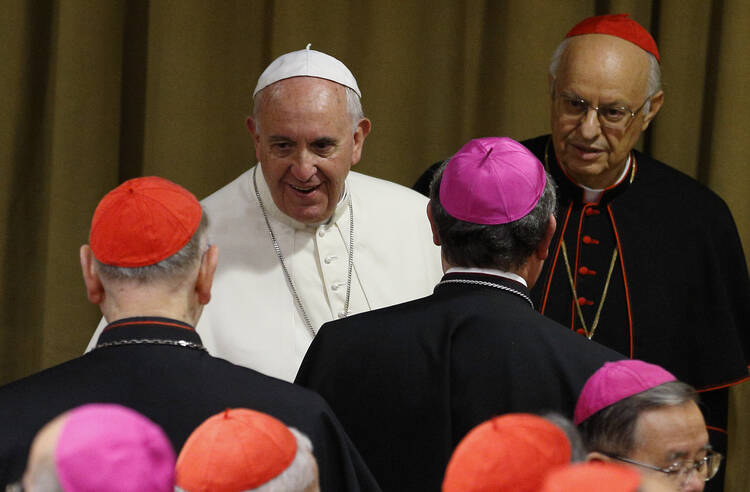 In a major break with past praxis, almost 50 years after Paul VI first established the synod of bishops, Pope Francis has given the synod fathers the key elements for synodality, something akin to a bill of rights that creates a climate of freedom.

He did so at the start of the synod’s first plenary session on Oct. 6, when he addressed the methodology of synodality, and told the 191 synod fathers participating in this assembly to say what they really think, and do so in total freedom and without fear of consequences.

“You bring the voice of the particular churches, gathered at the level of local churches through the bishops’ conferences...” he told them. “You bring this voice in synodality. It’s a great responsibility: you bring the realities and the ‘problematics’ of the churches, to help them to walk on that way which is the Gospel of the family.”

But there is “one basic general condition” for the proper exercise of synodality, he said: “Speak clearly. Let no one say, 'this can't be said, they will think this or that about me....' One must say everything that one feels, boldly!” (He used the Greek word parrhesia, which means ‘with boldness” or ‘candidly.’)

He revealed that after the Consistory of Cardinals in February 2014 (which focused on the family), “a Cardinal wrote to me saying that it was a pity that some cardinals did not have the courage to say certain things out of respect for the pope, thinking perhaps that the pope thought differently.”

Commenting on that, the pope said: “This is not good – it is not synodality, because it is necessary to say everything that in the Lord we feel must be said: without human respect, without timidity.”

“At the same time – he insisted - we must listen with humility and accept with an open heart all that our brothers say.”

“With these two attitudes synodality is achieved,” the pope stated.

He pleaded with them: “I therefore ask you, please, have these attitudes of brothers in the Lord: speak with boldness and listen with humility. And do so with great tranquility and peace, because the synod is conducted always with Peter and under Peter, and the presence of the pope is the guarantee for all and the custody of the faith”

He concluded with another plea: “Dear brothers, let us all collaborate together so that the dynamic of synodality is affirmed with clarity.”

Pope Francis began his groundbreaking speech in a gentle way by thanking the 253 participants for their presence and for their participation “which enriches the work and the spirit of collegiality and synodality for the good of the church and of families.”

By way of background to what he was about to say, he told them that he had wanted “the spirit of synodality” to prevail also in the election of the Relator, the Secretary and the President-Delegates for this extraordinary synod.

He revealed that the Relator and Secretary were actually elected by the post-synod council (that had been elected by the last synod in 2012). And since the pope normally chooses the three President-Delegates (who chair the plenary sessions), he had asked the post-synod council to propose three names for these posts, and he appointed the three they chose.

In that way too, Pope Francis has broken with past praxis where the pope always chose the prelates for those five key roles at the synod.

His brief but powerful intervention this morning should be seen against the background of past synods. As Archbishop of Buenos Aires he had participated in a number of them, starting in 2001, and was a direct witness to how these assemblies were carefully monitored, controlled and how even the Relators – including himself - were sometimes censored by senior Vatican officials regarding what they could or could not write or propose.

He knew that bishops often did not feel free to say what they truly felt, or share what they knew from their pastoral experience. He understood that the synods were not realizing their full potential as instruments of collegiality as originally intended by the Second Vatican Council.

Now as pope he is moving with determination to develop synodality and to promote greater collegiality in the church, as he said he would in the apostolic exhortation “The Joy of the Gospel” (“Evangelii Gaudium”), which is the programmatic document for his pontificate.

Gerard O’Connell
@gerryorome
Show Comments (
1
)
Comments are automatically closed two weeks after an article's initial publication. See our comments policy for more.
Michael Barberi
7 years 8 months ago
A great article. It is a breath of fresh air that the climate of freedom, proposed by Pope Francis with respect to what is written or spoken, is to be without consequences or censorship, and the guiding light for the 2014-2015 Synod on the Family. This guiding light, or so-called Bill of Rights, is dramatically different from the atmosphere and guiding principle spoken and/or expected at the 1980 Synod under JP II. What Pope Francis has proposed is true collegiality and synodality. Let's pray that all the Synod fathers will approach all issues impacting the family with an open and courageous mind, and guided by their consciences and the Holy Spirit.