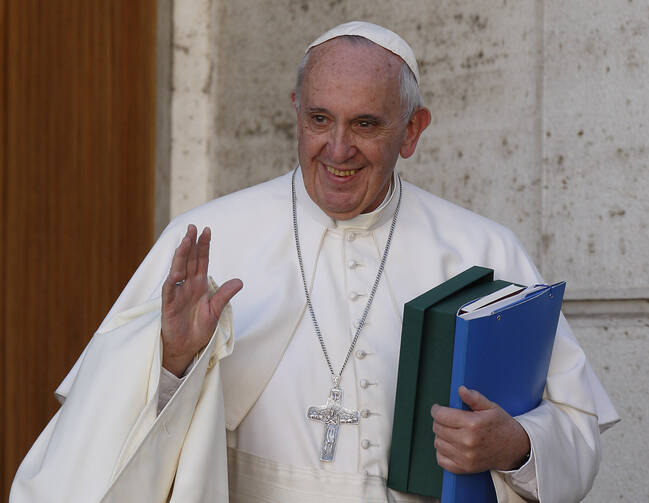 Pope Francis’ long-awaited apostolic exhortation on the family will be published on April 8, and will be known by its Latin name, “Amoris Laetitia” (“The Joy of Love”), on love in the family.

The Vatican announced this today and said it will be presented at a press conference in Rome on that date by Cardinals Lorenzo Baldisseri, general secretary of the Synod of Bishops, and Christoph Schönborn, O.P., the archbishop of Vienna. An Italian married couple will also be on the panel: Professor Francesco Miano, lecturer in moral philosophy at the University of Rome at Tor Vergata, and Professor Giuseppina De Simone in Miano, lecturer in philosophy at the Theological Faculty of Southern Italy in Naples.

There is enormous interest on what Francis will say in this important document that sources say is longer than “Evangelii Gaudium” (“The Joy of the Gospel”) and will be over 200 pages (in the size of Vatican texts).

In writing it, Francis has drawn on the work of the 2014 and 2015 synods of bishops on the family, and on the final report of last October’s synod, each paragraph of which gained the necessary two-thirds majority. That report reaffirmed traditional church teaching on marriage and the family and highlighted the pressing need to give greater attention to preparing couples for marriage and to the pastoral care of families. Significantly, however, it closed no doors to the development of new pastoral approaches to complex marriage situations, including those of divorced and remarried Catholics, and to the issue of homosexuality and the family. We will know next week what Francis has to say on these and other key issues.

The exhortation is expected to address the wide range of issues discussed at the two synods and carried in the final report, including the challenges families face from the socioeconomic, cultural, religious and interreligious contexts in which they live. Among these are challenges that arise from extreme poverty, armed conflict, migration, secularization and ideological colonization, as well as from young people’s fear of entering lifelong commitments, polygamy, cohabitation, openness to having children, single-parent families, the breakup of marriages and the consequences of this for children and the passing on of the faith.

Francis began writing the exhortation immediately after the October 2015 synod ended. Sources say he approached the task as a pastor, drawing on his own pastoral experience as a priest for 56 years in Argentina, as a bishop for 21 years in Buenos Aires (including 15 as archbishop) and now three years as pope. All that experience is likely to have had a decisive impact on his magisterial text on the family, just as St. John Paul II’s experience shaped his exhortation on the family more than 34 years ago.

The papal text is still secret. There have been no leaks so far. It is clear, however, from all that Francis has said, both at the synod and in his 2015 catechesis on the family, that there will not be any change in church doctrine. One can expect therefore that he will reaffirm marriage as a lifelong union between a man and a woman, open to having children. He is also likely to restate traditional church teaching on the indissolubility of marriage and emphasize the importance of solid preparation of couples for marriage and of ongoing pastoral accompaniment of married couples and the family.

On the other hand, in this Jubilee Year of Mercy, Francis is expected to open doors in the church’s pastoral approach to couples who are living together, to divorced and remarried Catholics and to homosexuality in the family. We have to wait for the text to see how he will do this, but it is likely to be along the lines that he outlined in his homily at Mass to new cardinals on Feb. 15, 2015, when he reminded them that “the church’s way, from the time of the Council of Jerusalem, has always been the way of Jesus, the way of mercy and reinstatement.... The way of the church is not to condemn anyone for eternity; [it is] to pour out the balm of God’s mercy on all those who ask for it with a sincere heart.”

Gerard O’Connell
@gerryorome
Show Comments (
5
)
Comments are automatically closed two weeks after an article's initial publication. See our comments policy for more.
William Rydberg
6 years 4 months ago
Looking forward to it! in the Risen Christ, Blessed be the Holy Trinity...
ed gleason
6 years 4 months ago
I hope Francis has a strong message about Catholic Family movements. Marriage Encounter, EE Retrouvaille, Focolare, etc have done some of this family community bonding. The Christian Family Movement was the best builder of LOCAL family community The other groups were too people scattered to do the proper bonding. Families are scattered The 'Going My Way and Bells Of St Mary's parishes are long gone. . A new initiative needs to be re-booted that helps families to bond together to survive in this secular environment... The isolated marriages and their children cannot be expected to thrive in secular cities or suburbs through out the world. In the last 50 years the Evangelicals have had much more success than Catholic parishes in bonding families... Catholic schools are now the only bonding mechanisum left and this family bonding is not even on the school agenda and the schools are fast fading. How about Intentionial Communites? Maybe we need a Catholic Real Estate. developer !. who welcomes economic/educational/racial diversity. (-:. ... . ..
Mike Escril
6 years 4 months ago
Why is the Catholic Church supposed to accommodate those who show no effort to live by Her rules ? How come the same leniency doesn't apply to those who show racial or religious or ethnic bias ?
Bill Mazzella
6 years 4 months ago
Please!
Luis Gutierrez
6 years 4 months ago
Wonder if he says something about the Church as a family, and why should the Church, as a family, remain locked in the patriarchal culture of male headship.