Facebook wants you to pray with them. Don’t trust their intentions. 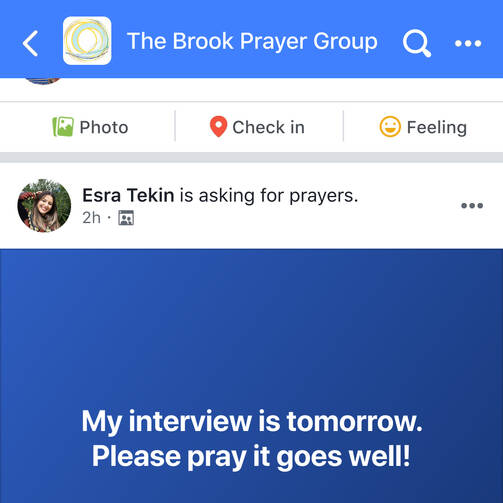 This image provided by Facebook in August 2021 shows a simulation of the social media company's prayer request feature. The tool has been embraced by some religious leaders as a cutting-edge way to engage the faithful online. (Facebook via AP)

Between March 2020 and May 2021, I offered Sunday Mass on Facebook. It was not something I had ever done before. One of the things that surprised me most about the experience was the prayers of intercession. At a normal Sunday liturgy, the intercessions are yet another moment when we in the congregation are asked to listen as someone reads prewritten intentions that may touch on something going on in the parish but in general look beyond. It is the church praying for the church and the world.

Having Mass online allowed everyone there to offer their own intentions. And the liturgies became much more personal as a result. It affected what I preached about and also created a palpable sense of community among those in attendance. Most of those people have never met or even laid eyes on each other. And yet as the months went on it became clear how much they had come to know about and care for one another.

Seeing so many religious communities turn to their platform during the pandemic, Facebook has decided to offer a prayer feature of its own. It is not something you can find in the main feed yet, but as of now all Facebook groups have the option of allowing people to ask for prayers, to which others can respond by clicking a button that says “I prayed.”

Seeing so many religious communities turn to their platform during the pandemic, Facebook has decided to offer a prayer feature of its own.

Reflecting on my own experiences with online petitional prayer, I do wonder whether a “prayer hands” button might provide a more appropriate response to some posts. The “like” button just does not work when someone is asking for prayers for their sister who has cancer or their spouse’s sudden death. And Facebook’s amorphous yellow creature squeezing a heart, though expressive, can seem a bit cloying. Also, it is the same button people sometimes use to say they’re happy about your birthday or that you are finally taking a vacation. It’s just weird.

At the same time, we are not talking about the Vatican or the Dalai Lama giving you a cool way to show your solidarity with someone else here. We are talking about Facebook, a company that makes its living off convincing people to reveal as much of their lives as possible on its platform. Offering a prayer function is not an attempt to help people but another way of using them. The company has acknowledged that people’s prayer posts will affect what ads they see. Undoubtedly, the whole point of having a specific prayer feature is to make it easier for Facebook to collate and sell people’s prayer-related data.

Facebook has also shown tremendous resistance, or incapacity, to regulating hate speech and misinformation. In fact, its algorithm, like all social media algorithms, is built around engagement. Posts we loathe or fear make us want to respond. “Likes” create an ongoing sense of validation that makes us want to post more. And a lack of likes also keeps us engaged, hoping that we will find that validation in the next post. When it comes to social media, we can each become like a gambler at 3 a.m. in Vegas, chasing that next win.

Facebook’s new “spiritual” functionality thus in a sense weaponizes our prayers against us. Every “I prayed” click stimulates us and also generates anxiety. Will I get more? Will it be as many as I think my prayer deserves? What if it’s not? Or if someone else gets more than me? What does that say about me? Or about them?

Offering a prayer function is not an attempt to help people but another way of using them. The company has acknowledged that people’s prayer posts will affect what ads they see.

From a spiritual point of view, it is madness, really. Prayer is an act of surrender, a way that we acknowledge our helplessness and turn our faces back toward the God who loves us and saves us. And yet repackaged on Facebook, the “practice” of prayer seems much more likely to invite us to turn further inward into that social media hellscape of narcissism and self-promotion. Pray for us, indeed.

Having said all that, I keep thinking back to that experience of Mass on Facebook and the vibrancy of a community where people are able to express their own prayers. In the Catholic tradition we like to highlight the Second Vatican Council’s call to “real participation” in the liturgy. Parishioners are not meant to be witnesses to the priest’s Mass but active participants in it.

What that usually means is that, at best, we all get to sing and some of us get to do things that, practically speaking, the priest can’t, like read all the readings, greet everyone as they enter or distribute Communion to everyone.

I was recently consulting on a television show where a question came up: What exactly is the deal with the little red votive candles that people light? Why is that a thing? And I wonder whether the popularity of the practice doesn’t come from the fact that votive candles give people a way to express that they are carrying something within them that is important and worthy of note by God and also the community. Each light is a prayer, a thanksgiving, a burden, a need.

Repackaged on Facebook, the “practice” of prayer seems much more likely to invite us to turn further inward into that social media hellspace of narcissism and self-promotion. Pray for us, indeed.

People come to church each Sunday carrying these private petitions. Often they’re the most important things going on in their lives, and yet our liturgies never actually give them a chance to share them. The best that we usually provide is a moment of silence.

That silence is not nothing; many of us have had the experience of offering something unexpectedly meaningful, a moment of connection with God. And how exactly could you do shared prayers of the faithful when you have 500 people in attendance?

Is your smartphone making you sin more? Consider a technological examination of conscience.
Jim McDermott

But could we not create some kind of moment during the intercessions when people are invited to go up and light candles or place written prayers somewhere where they can be seen and read? At Los Angeles’ yearly Religious Education Congress, I have seen them offer a media feed in which people in the pews can express their prayers while the intercessions and offertory are happening. Why not try that?

When it comes to people’s prayers, is a moment of silence really all we can offer? If it is, is it any wonder that people might turn to an omnipresent media conglomerate for help instead?