What ‘Jeopardy!’ can learn from the Vatican 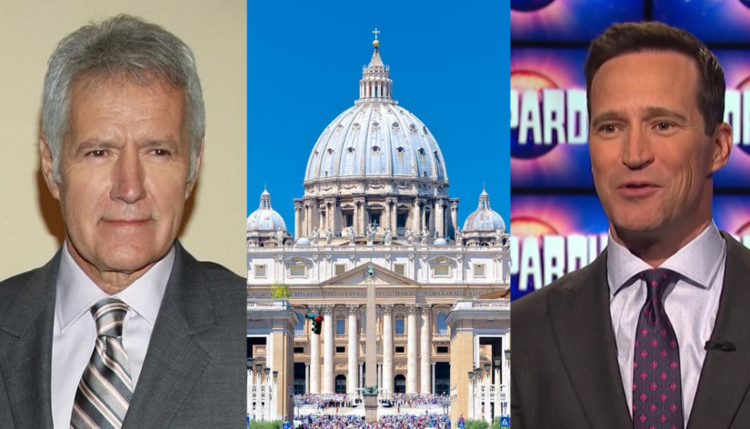 Update (9/3/2021): Since the original publication of this article, Mike Richards was removed as the new host of Jeopardy! and eventually fired as the executive director of the program after The Ringer published a report detailing past incidents of sexist and other offensive remarks by Mr. Richards. One major difference between the host of Jeopardy! and the pope? You can’t fire the pope.

Many thought the news this week that the public selection process for a new host of the game show “Jeopardy!” was likely to conclude with the selection of the show’s own (and relatively unknown) executive producer, Mike Richards, deserved that question.

“Oh, I’m sorry,” one can imagine former host Alex Trebek saying with a cringe, “that’s not the answer we were looking for.”

Mr. Trebek died last November of pancreatic cancer after hosting the popular program since its reboot in 1984. His soothing (if at times painfully patronizing) voice had dominated the airwaves, in many places between 7 p.m. and 7:30 p.m., for decades. The show’s producers had no heir apparent, and so instead spent the months after Mr. Trebek’s death auditioning quite a few alternatives, including LeVar Burton, Mayim Bialik, Anderson Cooper, Katie Couric, Richards himself, Robin Roberts, the NFL quarterback Aaron Rodgers and famed “Jeopardy!” champion Ken Jennings—who was probably the favorite until muckraking Catholic journalists found out he lied about his age on his Tinder profile his habit of sending insensitive tweets came to light.

I know what you’re thinking. Joseph Ratzinger would have made an amazing host of “Jeopardy!” I don’t disagree.

Mr. Burton, of “Star Trek” fame, was the online darling in recent months, and more than a few fans are angry that the nod is going to Mr. Richards. With so many attractive candidates, why hire from within?

The folks at “Jeopardy!” need to learn from the Catholic Church on this score. What organization can’t take a few cues from the church when it comes to talent management and transitions of power? When it comes to rooting out financial corruption or policing wayward members or upholding strict standards of employee conduct or maintaining unity among its ranks or keeping its brand pure from scandal, no organization has been better in recent years than...than......um...where was I going with this?

But this time around, the church really can teach “Jeopardy!” something, and it is this: Don’t pick from your inner circle. It is a lesson the church learned in its papal elections over the last century, and a valuable example for others who work with the transitions between big personalities. After more than a millennium of picking Italian cardinal after Italian cardinal—before there was even a country called “Italy”—the church finally figured out in the 20th century that sometimes it behooves an institution to beat the bushes a bit for a new leader.

Do you remember who was favored to become the next pope in 2013, upon the resignation of Pope Benedict XVI? If your bingo card had Cardinal Angelo Scola on it, you were right there with the oddsmakers on the most papabile of papabili: a company man with all the right credentials, including many years as patriarch of Venice; an Italian with years of pastoral experience; an intellectual who had run a university and who had traditionalist leanings in his theology; and a rumored front-runner in the 2005 conclave that had elected Benedict. Cardinal Scola was also well-known to the Roman Curia and the College of Cardinals—which included 28 Italians. But sorpresa sorpresa, despite Cardinal Scola leading after the first ballot, we got a Jesuit from Argentina instead. And we are much the better for it.

Let’s try that exercise again: Who were the papabili in 2005, after the death of Pope John Paul II? After the cardinals had so dramatically broken with tradition in 1978 by electing Karol Wojtila—a Polish cardinal—to the papacy, surely they would return to an Italian, right? And probably one who would not be pope for an overly long time, considering that Pope John Paul II had reigned for 27 years, a long tenure even in a town that measures time by centuries. Cardinal Scola was papabile then, too, along with a number of other prominent Italian cardinals. And yet the curtains opened on the balcony to reveal Cardinal Joseph Ratzinger, a German with a nickname earned during his many years as the Vatican’s doctrinal watchdog that would give any manager pause: “God’s Rottweiler.”

But 27 years is indeed a long time, and it seemed that the cardinal electors wanted continuity with John Paul II rather than continuity with the Roman Curia. Of course, Cardinal Ratzinger had given the homily at John Paul II’s funeral, a bit of an audition for the top spot. But still, tell me in 1945 that it would only take 60 years for the church to shrug and say “Let’s have a German pope.” And eight years later, that very traditional pope became the first modern pontiff to resign. Also not on anyone’s bingo card, yes?

Actually, let’s go back to 1978, to the summer of the three popes, and play that game again. After Pope Paul VI and the newly elected Pope John Paul both died, the cardinals had to pick again in haste. The Italians held all the cards. In addition to the traditionalist stalwart Cardinal Giuseppe Siri of Genoa (forever the bridesmaid at papal conclaves), the Sistine Chapel also held a seat for Cardinal Giovanni Benelli, the archbishop of Florence who was seen as a more progressive alternative to Cardinal Siri. And yet seemingly out of nowhere, a 58-year-old cardinal from Poland got the nod. He wasn’t old, he wasn’t Italian, he wasn’t a member of the Roman inner circle. Now he’s a saint.

Alex Trebek wasn’t a saint, despite Fordham University’s confident assertion he should be raised to the altars. But he was a beloved figure who was simultaneously a celebrity in his own right and a representative of tradition, much like our modern popes. Picking a caretaker to keep the seat warm might allow us all to remember Mr. Trebek fondly in the coming months and years, but it doesn’t guarantee that “Jeopardy!” will retain the characteristics he exemplified. Bring in someone new, unexpected, exciting!

I know what you’re thinking. Joseph Ratzinger would have made an amazing host of “Jeopardy!” I don’t disagree. But there’s another candidate out there, someone who has shown he has the chops and who would certainly bring some fresh, if mildly smoky, air to the set of “Jeopardy!” Someone who has proved his bona fides with his commentary at the Tokyo Olympics.

Think of it: Announcer Johnny Gilbert shouting over the familiar opening bars of the show: “And now, here is the host of ‘Jeopardy!’, SNOOP DOGG!”