Meghan Markle and Melissa McCarthy, let Catholics help you with your mentoring initiative 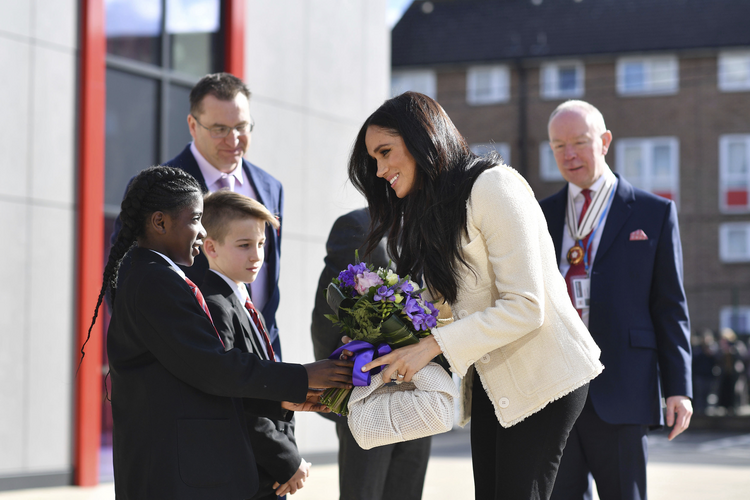 Meghan, Duchess of Sussex, is greeted by pupils at the Robert Clack Upper School in Dagenham, Essex, in eastern London, during a surprise visit to celebrate International Women's Day on March 6, 2020. (Ben Stansall/Pool via AP, File)

As a way of celebrating her 40th birthday, Meghan, the Duchess of Sussex, has partnered with Melissa McCarthy, the Queen of Comedy and My Heart, to announce what The Los Angeles Times describes as “a global charitable initiative,” in which 40 successful women from around the world will each donate 40 minutes of their time to mentor a woman who left the work force during the pandemic.

“Over two million women in the U.S. alone and tens of millions around the world have lost their jobs due to Covid,” the duchess points out in a comedic video she and Ms. McCarthy put together. “And I think if we all do it, if we all commit 40 minutes to some sort of act of service, I think we can create a ripple effect.”

Let me say three things about this proposal at the outset. First, no one should ever pooh-pooh anyone trying to do anything to help anyone. You never know what can change a life (and to paraphrase Flannery O’Connor, that life may very well be your own). Second, in her brief time as a member of the royal family, the Duchess of Sussex has suffered appalling abuse, and it is a miracle she still wants to be of public service at all.

In her brief time as a member of the royal family, the Duchess of Sussex has suffered appalling abuse, and it is a miracle she still wants to be of public service at all.

Finally, laying my own cards on the table, Melissa McCarthy is a Catholic raised around Chicagoland, as am I. In fact, we are almost exactly the same age. All of this makes us basically family. And Missy, we know you’re real busy, but Aunt Eileen wanted to make sure you know she’s always got a seat for you at the holidays. She still does Grandma Marion’s sweet potatoes with the marshmallows on top.

Having said all that, I have to admit my first reaction watching their announcement was concern. Jesus seemed to be able to accomplish quite a bit in 40 minutes, and Ms. McCarthy is a fountain of joy whose capacity to make the world better just by being in it seems to be endless.

But for the rest of us, giving 40 minutes is the chronological equivalent of donating a cup of coffee.

This is especially true given the circumstances that the duchess is rightly highlighting: In the United States alone, women have left their jobs during the pandemic at a much higher rate than men—particularly women with children under 10 years old,according to a McKinsey & Company report released in March. This week, The New York Times reported that the lack of viable child care options, plus the rise of the Delta variant of Covid, is making it impossible for many working mothers to consider returning to the job force. (If you are reading this and you are not vaccinated, please get vaccinated.)

Meanwhile, some medical professionals fear that domestic violence may have increased to such a degree worldwide during the pandemic that, it might be, as the headline of an article in the New England Journal of Medicine puts it, “a pandemic within a pandemic.”

The Catholic Church has a lot of experience being of service to others. And one of the key lessons we have learned is that being a mentor or friend starts with “not serving the other, but being one with the other.”

The moral philosopher James F. Keenan, S.J., defines mercy as “the willingness to enter into the chaos of another.” And that is what it means to be a mentor, according to Emily Rauer Davis, an assistant chaplain at the College of the Holy Cross. Being a mentor, she says, is “first and foremost about meeting people where they are and accepting them. Letting them be who they are and being present to that.”

But that is hard to do in a single session or with the presumption that you will be able to help right away. “You can’t go in gangbusters, trying to give advice, until you have some understanding of who they are and where they’re coming from,” says Ms. Rauer Davis. “Otherwise you’re just projecting needs onto somebody.”

She recalls a story from emergency room doctor Michele Harper’s recent memoir The Beauty in Breaking. Dr. Harper entered a patient’s room to provide a signature, but as she was leaving, the patient made an off-the-cuff comment that raised questions for the doctor. She stopped to ask whether there was something more to talk about, and the patient ended up sharing an experience of sexual assault that she had never told anyone.

If the duchess and her friends really can offer only 40 minutes of mentoring, “The best thing they could do is say ‘Tell me your story, I want to know who you are,’ and be super attentive listeners.”

“All she needed was her papers signed,” Ms. Rauer Davis says. “But there was all this other stuff under there waiting.”

Whether through institutions like Catholic Charities, Ignatian Volunteer Corps or Homeboy Industries; opportunities like spiritual direction and pastoral counseling; or the services provided by campus ministry departments, the Catholic Church has a lot of experience being of service to others. And one of the key lessons we have learned is that being a mentor or friend starts with what Greg Boyle, S.J., describes in his book Tattoos on the Heart as “kinship,” or “not serving the other, but being one with the other.”

“Compassion,” he writes, “isn’t just about feeling the pain of others; it’s about bringing them in toward yourself.”

If the duchess and her friends really can offer only 40 minutes, Ms. Rauer Davis gives this advice: “The best thing they could do is say ‘Tell me your story, I want to know who you are,’ and be super attentive listeners.”

As Ms. McCarthy herself has said, “Everybody’s a train wreck in their own very special way.” To be of service to someone means to welcome them into our lives as such, just as so many of Ms. McCarthy’s movies have been about accepting her oddball characters for the beautiful messes that they are.

Meghan Markle’s life is exceptional—but her suffering isn’t. We should honor her bravery in sharing it.
Maggi Van Dorn

You don’t have to be royalty or the physical incarnation of laughter to do that, either. If Lent is the season where we often give something up, what about making this autumn a season where we each try to be “kin” to someone we know who is in need right now?

(By the way, if you’re looking for ways you could go about doing that, America Media has information on many volunteer opportunities online.)

The 40x40 initiative may have its flaws, at least as presented. But that doesn’t mean we can’t make it what the duchess and Ms. McCarthy intend: a global groundswell of good will. Certainly we are in a time when so many of us sorely need it.