Boris Johnson had every right to be married in the Catholic Church. 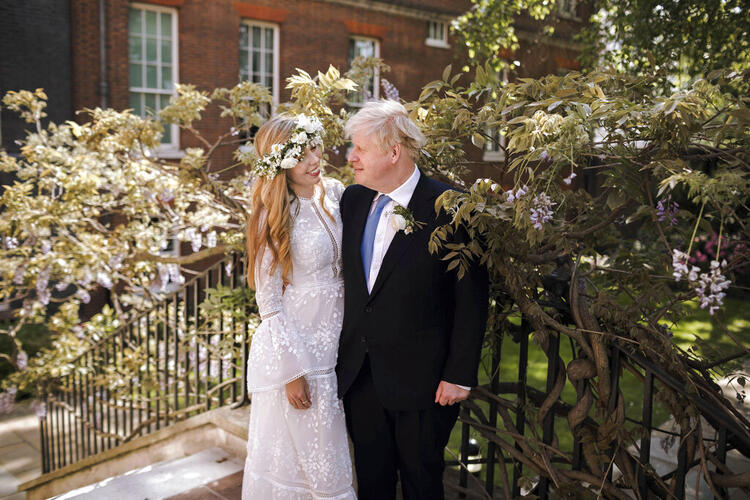 Boris Johnson and Carrie Symonds pose together for a photo in the garden of 10 Downing Street after their wedding on Saturday. (Rebecca Fulton via AP)

Here is an idea for a Catholic Church crisis communications workshop in the United Kingdom:

Imagine being woken at 6am on Trinity Sunday by the BBC to be told that the prime minister, a twice-divorced nominal Anglican who has gained some notoriety for his extramarital affairs, got married the day before in front of friends and family in Westminster Cathedral—the mother church of the Roman Catholic Church in England and Wales.

Could you come on the main radio news program in an hour and explain?

Let us add a bit of pressure. Beyond a gnomic statement saying only that both Boris Johnson and Carrie Symonds are parishioners and baptized, and that “all necessary steps were taken, in both church and civil law, and all formalities completed before the wedding,” members of the cathedral staff have gone to ground, and no one else seems to know anything. The media are citing “loopholes” in Catholic marriage law, and Twitter is imploding in fury and spluttering at the church’s double standards. How can there be one rule for the prime minister and another for everyone else?

Sacraments are not a reward for the righteous.

Already the questions are pouring in. “Can anyone explain to me,” asked an assistant priest in Liverpool, Father Mark Drew, on Twitter, “how ‘Boris’ Johnson, who left the Catholic Church while at Eton and is twice divorced, can be married at Westminster Cathedral, while I have to tell practicing Catholics in good faith who want a second marriage in Church that it’s not possible?”

This is not, of course, just an idea for a workshop: It happened to me on Sunday morning, May 30. I used my hour of preparation to (a) drink coffee, (b) get acquainted with the facts, such as I could find them, and (c) brush up on Catholic sacramental law.

The starting point is this. Sacraments are not a reward for the righteous. Catholics have a right to them, as long as there is no impediment, they meet the requirements and they enter freely into them in full knowledge of their meaning and import.

To be wed sacramentally, both partners must be baptized Christians and one must be a Catholic. They must be free to marry, and must receive instruction in the church’s understanding of marriage: as lifelong, between a man and a woman, open to life, and so on.

In this case, both are baptized Catholics. Mr. Johnson was raised Catholic by his mother Charlotte, a portrait painter, who divorced from his father Stanley in 1979. True, at Eton, Boris chose to be confirmed in the Church of England, but in the eyes of the Catholic Church he remains a Catholic. So we can check that box.

Assuming that certain procedures above were followed, Boris Johnson has been treated exactly the same as everyone else, under the same universal law.

Mr. Johnson’s previous two marriages, it is safe to assume, “lacked canonical form”: That is, they did not fulfill the requirements of church law and therefore cannot be considered sacramental. (There are dispensations from these requirements in advance, and ex post facto “validations” that can change this, but—let’s again assume—that Mr. Johnson did not avail himself of them in the case of the first two marriages.) So all that was needed in this case was a simple declaration of the invalidity of his previous marriages by the church. Another box theoretically checked.

Mr. Johnson and Ms. Symonds reportedly received instruction over at least six months from Father Daniel Humphreys, the former administrator of Westminster Cathedral and a priest of the Diocese of Westminster, who in December 2020 baptized their infant son Wilfred, so we know he heard about the meaning of the binding vows he took on Saturday. Given his divorces and very public history of infidelity, that is a big box to check.

Conclusion: Far from Mr. Johnson getting special treatment, the point is the opposite. Assuming that certain procedures above were followed, he has been treated exactly the same as everyone else, under the same universal law. And this, it turns out, is the real stumbling block for so many.

It is striking how censorious British public opinion has been of the church for witnessing this marriage. It is as if the church had a duty to reject the request to marry because of Mr. Johnson’s past, in order to “send a clear message” upholding its teaching on marriage. In other words, the public wanted him treated differently from everyone else. But as the debate in the American church over the bid by a group of U.S. bishops to blanket-ban certain politicians from the Eucharist shows, playing politics with the sacraments—even ecclesiastical politics—goes against the nature of the sacraments themselves.

Of course, there is a sense in which Mr. Johnson marrying in Westminster Cathedral is a scandal: a very Gospel type of scandal. What brings most of us up short in this story, after all, is the extraordinary latitude the church gives to the operation of God’s grace.

What brings most of us up short in this story is the extraordinary latitude the church gives to the operation of God’s grace.

Which brings us to Mr. Johnson’s own faith. Only Father Humphreys would be able to say much about that, and he won’t say anything. But others have speculated that the events of Mr. Johnson’s life in recent years—including his brush with death on a Covid-19 ward last year, his new relationship and new son, and now his entering a Catholic sacramental marriage while leading his country out of the greatest crisis since the Second World War—it would be no surprise if he had sometimes looked back to the faith of his mother and grandmother.

Another question: Might this be the “twitch upon the thread” that Father Brown spoke of in G.K. Chesterton’s stories? The announcement from the Archdiocese of Westminster said Mr. Johnson and his new wife “are both parishioners of the Westminster Cathedral parish.” Has Boris Johnson crossed the Tiber?

If so, he would not do so publicly while prime minister. There is the thorny constitutional issue of a Catholic prime minister appointing Anglican bishops in the name of the queen, the “Supreme Governor” of the Church of England. But the main obstacle is one of political distraction. The aggressively adversarial British political system encourages picking away at any perceived inconsistency or hypocrisy. A Catholic prime minister would be permanently on the defensive, accused by secularists of taking his orders from Rome and by Catholics of a lack of coherence with church teaching.

Explainer: What is an annulment? (And why does Pope Francis want to make it easier to get one?)
James T. Keane

From Thames to Tiber: Tony Blair and the politics of conversion
Austen Ivereigh

Those are some of the reasons why Tony Blair received instruction to become a Catholic while still prime minister but was not received into the church until 2008, soon after he had left office.

Of course it is possible that Mr. Johnson has been already secretly received into the church, in pectore, and that after he leaves office we will discover that he was a practicing Catholic all along. That almighty constitutional explosion could be the second scenario for the church crisis communications workshop.

But it is more likely that the prime minister is on a journey, with early, fumbling steps. Whatever one thinks of him, it is good that he has stopped by Westminster Cathedral for some guidance. There is every reason to believe that Father Humphreys and the newly-married couple followed the Catholic Church’s procedures for ensuring that Mr. Johnson’s previous marriages were invalid. Given that proper attention to form, he had every right to be married in the Catholic Church.

Austen Ivereigh is a Fellow in Contemporary Church History at Campion Hall at the University of Oxford.

@austeni
Provide feedback on this article
Join the conversation: Login or create an account
Before you can comment, you need to update your profile to include your first and last name, as required in our comments policy. Then reload this page and you'll be set up for commenting. Update your profile