‘I’m angry about homophobia in my church’: Why this German Jesuit is going against a Vatican decree against blessing gay unions 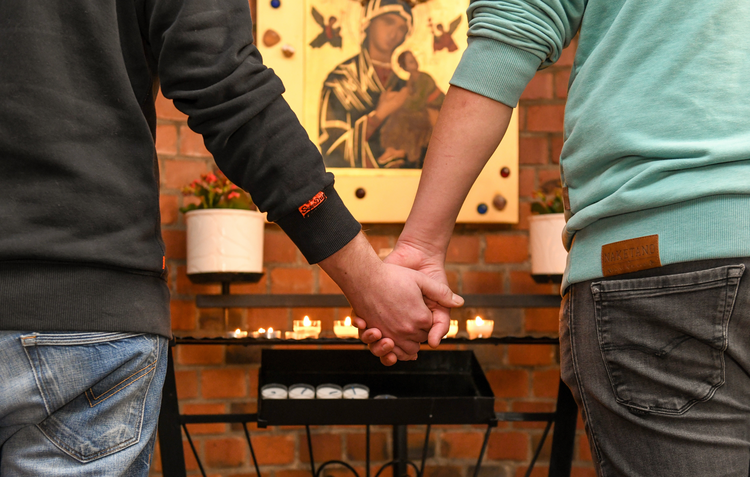 Two men hold hands in front of a candle altar with an icon of Mary in a Bonn, Germany, chapel, Oct. 22, 2020. (CNS photo/Harald Oppitz, KNA)

It was not a decision he came to overnight, but when the German Jesuit Jan Korditschke heard the anger and pain felt by L.G.B.T. Catholics in the wake of the Vatican’s March letter, in which priests were barred from blessing same-sex couples because God “cannot bless sin,” he knew he had to do something.

“I'm angry about homophobia in my church, and I also feel kind of ashamed because of that,” Father Korditschke told America. “And I feel an urge to speak out on behalf of L.G.B.T. Catholics in our communities.”

Father Korditschke said he has met many L.G.B.T. Catholics through his work as head of the Archdiocese of Berlin’s adult baptism program, the equivalent of the Rite of Christian Initiation of Adults in the United States. He said he encountered same-sex couples committed to the church and came away “impressed by their faith and their spiritual depth.” Some of those same couples expressed disappointment when the Vatican statement seemed to “disqualify or devalue those relationships,” he said.

Father Korditschke: “I'm angry about homophobia in my church, and I also feel kind of ashamed because of that. And I feel an urge to speak out on behalf of L.G.B.T. Catholics in our communities.”

He prayed about how best to respond and then received permission from his local superior to participate in a movement taking place in about 100 churches throughout Germany this week, in which priests and lay ministers will bless same-sex couples. On Sunday, the 44-year-old Father Korditschke will hold a ceremony at a Jesuit parish in Berlin for any couple, gay or straight, who seeks a blessing from the church.

Should any same-sex couple attend Sunday’s service—Berlin churches have already offered a handful of blessing opportunities beginning last weekend—Father Korditschke said he will “acknowledge and appreciate that their love is something good, give thanks to God for this love because it is good, praise God for this love and ask God to protect this love and strengthen it and guide it.”

German church leaders and theologians had been discerning for years how to incorporate L.G.B.T. people into the life of the church, including floating the idea that a blessing of same-sex couples, one distinct from marriage, could be a way to be more welcoming. As part of a synodal process that began in 2020, aimed at addressing a range of challenges facing the church, some German bishops have been pushing for a plan that would allow priests in their dioceses to bless same-sex couples even if other dioceses around the world prohibited them.

On Sunday, Father Korditschke will hold a ceremony at a Jesuit parish in Berlin for any couple, gay or straight, who seeks a blessing from the church.

The letter from the Congregation for the Doctrine of the Faith effectively quashed that idea.

The head of the German Bishops’ Conference last month criticized the grassroots initiative for gay blessings, which is called “Liebe Gewinnt” or “Love Wins.” Limburg Bishop Georg Baetzing said the blessings “are not suitable as an instrument of church political manifestations or political actions.”

But Germany’s powerful lay organization, the Central Committee of German Catholics, or ZdK, which has been advocating for gay blessings since 2015, positioned itself once more in favor of them. It called the contentious document from Rome “not very helpful” and explicitly expressed its support for ”Love Wins.”

“These are celebrations of worship in which people express to God what moves them,” Birgit Mock, the ZdK’s spokeswoman for family affairs, told the AP.

Limburg Bishop Georg Baetzing said the blessings “are not suitable as an instrument of church political manifestations or political actions.”

The ZdK has been taking part in the “synodal path” meetings for more than a year with the German bishops. They are due to conclude in the fall. The meetings include talks about allowing priests to get married, the ordination of women and a different understanding of sexuality, among other reforms. The process was launched as part of the response to revelations of clergy sexual abuse.

Some Catholic pundits have warned that the German blessings could lead to schism—the fact that the services are taking place in the reformer Martin Luther’s home nation is an analogy seemingly just too good to resist—but Father Korditschke says such fears are overstated.

“There are different opinions, there is conflict and there is a plurality of theologies and ways of living a spiritual life,” he said. “I think this is not a problem, but this is a feature of our being Catholic. The Catholic Church is not a uniform totality without any differences. There is room for a diversity of different cultures, different theologies.”

“I want to contribute to a church where L.G.B.T. people can fully participate and offer all their talents and their capabilities and be fully part of the life of the church.”

He said this reality “can cause tensions and conflicts” and added it’s the job of Catholic thinkers “to develop a culture of dealing with these conflicts.”

At his parish, located in a middle-class section of Berlin, Sunday Mass seeks to be welcoming, and worship is supplemented with Ignatian spirituality workshops and religious discussion groups. Father Korditschke said it is important for priests who support L.G.B.T. Catholics to speak out and take a stand. Ultimately, he said, he decided despite the risks, he is blessing same-sex couples because in their relationships he sees love.

“I want to contribute to a church where L.G.B.T. people can fully participate and offer all their talents and their capabilities and be fully part of the life of the church,” he said. “Their love is something good. That’s the basic thing that everything comes down to, that I don’t believe that their love is sin.”