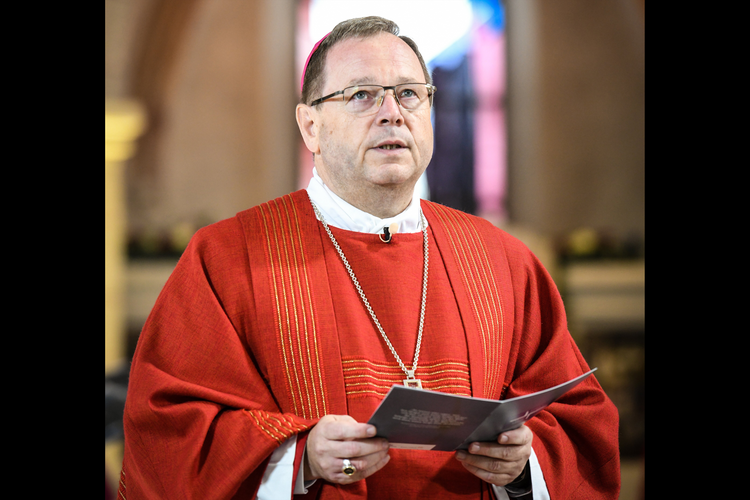 Limburg Bishop Georg Bätzing, president of the German bishops' conference, is pictured in a Sept. 15, 2019, photo. In wide-ranging interview, the self-described "conservative" bishop said the church needs to change and criticized the Vatican's treatment of the church in his country. (CNS photo/Harald Oppitz, KNA)

BERLIN (CNS) -- In a wide-ranging interview, the head of the German bishops’ conference called for far-reaching changes to the Catholic Church and criticized the Vatican’s treatment of the church in his country.

“I would describe myself as conservative because I love this church and enjoy devoting my life and my strength to it. But I want it to change,” Limburg Bishop Georg Bätzing told the magazine Herder Korrespondenz. His remarks were reported by the German Catholic news agency KNA.

Among other things, Bishop Bätzing suggested changing church teaching on homosexuality. The Catholic Church says homosexual acts are “intrinsically disordered,” but homosexuals are to be treated with “respect, compassion and sensitivity” and without discrimination.

He said it was becoming increasingly difficult to justify the ban on ordaining women deacons and priests.

“We need solutions that are not only effective in private, but also have public visibility -- yet make it clear that no marriage is being solemnized,” he said. In addition to homosexual couples, for example, people who remarry after a divorce are not allowed to marry as Catholics without the first marriage being annulled.

KNA reported that, in the interview, the Limburg bishop called for reforms of the participation of women in the church. He said it was becoming increasingly difficult to justify the ban on ordaining women deacons and priests. It was important to him to “honestly state the church’s arguments as to why the sacramental ministry can only be given to men.”

“But I must honestly say that I am also aware that these arguments are becoming less and less convincing and that there are well-developed arguments in theology in favor of opening up the sacramental ministry to women as well,” Bishop Bätzing said.

He said he often mentioned the ordination of deacons as the first step before the ordination of priests and bishops. He said he saw room to maneuver on the issue, adding that he favored a greater involvement of women and of laypeople in general in the Mass, including giving the homily, which has been prohibited.

He called for an independent and transparent investigation of abuse and said it must be clearly stated who was and is responsible for what. Those who violated the existing guidelines must “in every case bear the consequences of this behavior,” the Limburg bishop said.

Bishop Bätzing criticized the Vatican’s treatment of the church in Germany, particularly the Vatican’s handling of a paper on shared Communion that he had signed. German Catholic and Protestant theologians and bishops had published an appraisal of the topic in May, and it was scheduled to be discussed at the German bishops’ fall plenary assembly in Fulda at the end of September.

“I try to understand that and suspect that Rome is under a lot of pressure regarding how to keep together the universal church."

However, on Sept. 18, the Vatican Congregation for the Doctrine of the Faith voiced strong objections to the appraisal, saying that differences between Catholics and Protestants in the understanding of the Eucharist and the ministry were “still so grave” that they ruled out the attendance of at each other’s services, KNA reported.

“I was in Rome at the end of June for my inaugural visits and spoke with three cardinals involved. None of them said that a review of the process was underway or that they would be happy to talk to me about it,” Bishop Bätzing told Herder Korrespondenz.

In the debate about parish reform and the Synodal Path reform project he had also experienced reservations in the Vatican “about us Germans and the way we do things,” Bishop Bätzing added. Scheduled to run for two years, the Synodal Path is debating the issues of power, sexual morality, priestly life and the role of women in the church. The aim is to restore trust lost in the clergy abuse scandal after the German bishops’ conference released a study that revealed an estimated 3,700 cases of sexual abuse reported in the German church from 1946 to 2014.

“I try to understand that and suspect that Rome is under a lot of pressure regarding how to keep together the universal church with so many different cultural influences,” Bishop Bätzing told the magazine.

But, he said, the answer should not be to wait for the last one, and to have no one go ahead and look for answers “that are suitable for their cultural context and prevent the gap between the Gospel and the respective culture from becoming ever wider.” The answers must be allowed to be more decentralized, and must permit leeway, he said.