‘The love of homosexuals is something good’: German Catholics to bless gay unions, defying Vatican ban 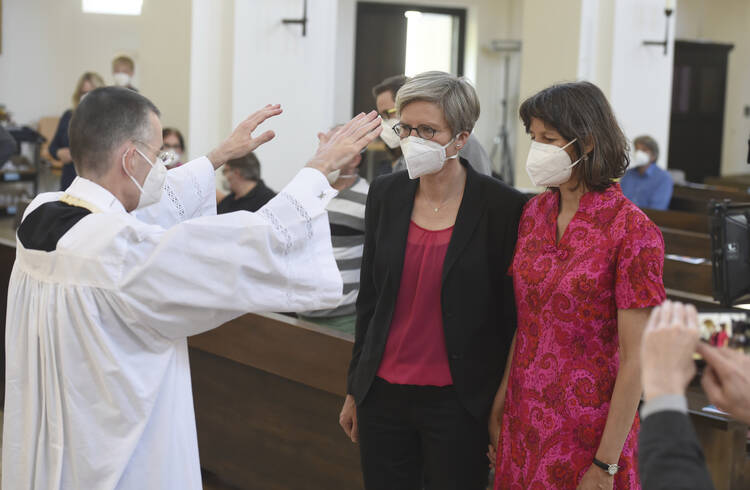 Vicar Wolfgang Rothe, left, blesses the couple Christine Walter, center, and Almut Muenster, right, during a Catholic service with the blessing of same-sex couples in St Benedict's Church in Munich, Sunday, May 9, 2021. Germany’s Catholic progressives are openly defying a recent Holy See pronouncement that priests cannot bless same-sex unions by offering exactly such blessings at services in about 100 different churches all over the country.

BERLIN (AP) — Germany's powerful Catholic progressives are openly defying a recent Holy See pronouncement that priests cannot bless same-sex unions by offering such blessings at services in about 100 different churches all over the country this week.

The blessings at open worship services are the latest pushback from German Catholics against a document released in March by the Vatican’s orthodoxy office, the Congregation for the Doctrine of the Faith, which said Catholic clergy cannot bless same-sex unions because God “cannot bless sin.”

The document pleased conservatives and disheartened advocates for LGBTQ Catholics around the globe. But the response has been particularly acute in Germany, where the German church has been at the forefront of opening discussion on hot-button issues such as the church’s teaching on homosexuality as part of a formal process of debate and reform.

Germany's powerful Catholic progressives are openly defying a recent Holy See pronouncement that priests cannot bless same-sex unions by offering such blessings at services in about 100 different churches all over the country this week.

The dozens of church services celebrating blessings of gay unions are the latest escalation in tensions between conservatives and progressives that have already sparked alarm, primarily from the right, that part of the German church might be heading into schism.

Germany is no stranger to schism: 500 years ago, Martin Luther launched the Reformation here.

Pope Francis, who has championed a more decentralized church structure, has already reminded the German hierarchy that it must remain in communion with Rome during its reform process, known as a “synodal path."

In Berlin, the Rev. Jan Korditschke, a Jesuit who works for the diocese preparing adults for baptism and helps out at the St. Canisius congregation, will lead blessings for queer couples at a worship service May 16.

Germany is no stranger to schism: 500 years ago, Martin Luther launched the Reformation here.

The 44-year-old said it is important that homosexuals can show themselves within the Catholic Church and gain more visibility long-term. He said he was not afraid of possible repercussions by high-ranking church officials or the Vatican.

“I stand behind what I am doing, though it is painful for me that I cannot do it in tune with the church leadership,” Korditschke said, adding that “the homophobia of my church makes me angry and I am ashamed of it.”

The head of the German Bishops Conference last month criticized the grassroots initiative for gay blessings which is called “Liebe Gewinnt” or “Love Wins.”

Limburg Bishop Georg Baetzing said the blessings “are not suitable as an instrument of church political manifestations or political actions.”

However, Germany's powerful lay organization, the Central Committee of German Catholics, or ZdK, which has been advocating for gay blessings since 2015, positioned itself once more in favor of them. It called the contentious document from Rome “not very helpful" and explicitly expressed its support for ”Love Wins."

“These are celebrations of worship in which people express to God what moves them," Birgit Mock, the ZdK's spokeswoman for family affairs, told the AP.

When I came out as a gay Catholic, Saints Augustine and Monica helped me grow closer to my mom — and God
Alex Gruber

“The fact that they ask for God's blessing and thank him for all the good in their lives — also for relationships lived with mutual respect and full of love — that is deeply based on the Gospel,” Mock said, adding that she herself was planning to attend a church service with gay blessings in the western city of Hamm on Monday in which she would pray for ”the success of the synodal path in which we, as a church, recognize sexuality as a positive strength."

The ZdK has been taking part in the “synodal path” meetings for more than a year with the German Bishops Conference. They are due to conclude in the fall. The meetings include talks about allowing priests to get married, the ordination of women and a different understanding of sexuality, among other reforms. The process was launched as part of the response to revelations of clergy sexual abuse.

“We're struggling in Germany with a lot of seriousness and intensive theological discourses for the right path,” Mock added. “Things cannot continue the way they did — this is what the crimes and cover-ups of sexual abuse showed us."

"We need systemic changes, also regarding a reassessment of the ecclesiastical morality of sexuality,” Mock said.

Kirsten Grieshaber - Associated Press
Show Comments ()
Join the conversation: Login or create an account
Before you can comment, you need to update your profile to include your first and last name, as required in our comments policy. Then reload this page and you'll be set up for commenting. Update your profile