What the conversion of St. Ignatius can teach us 500 years later 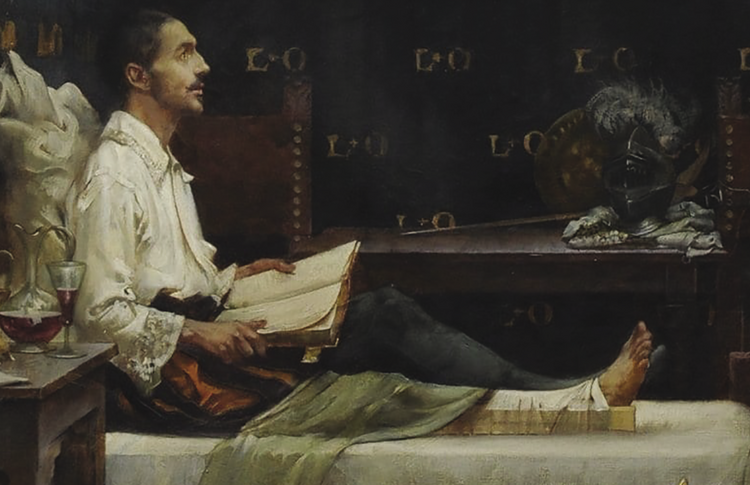 "Ignatius Convalesces at Loyola,” by Albert Chevallier-Tayler in St. Ignatius Church of the Sacred Heart in Wimbledon, England. (© Jesuit Institute)

In 1597, on the same day that she went completely blind, a woman from Mallorca named Noguere was touched by the relics of Saint Ignatius. She reported that a scent of roses filled her with a sweet consolation. The acute pain in her eyes suddenly subsided. She began to see things faintly, and the next day she saw perfectly. This healing was one of the supporting miracles for the canonization of St. Ignatius Loyola.

This year, beginning on May 20 and continuing until July 31, 2022, the Society of Jesus worldwide, and the entire Ignatian family, celebrate St. Ignatius’ spiritual journey from the 500th anniversary of his conversion in 1521 to his canonization in 1622. In the context of this Ignatian Year, Noguere’s story helps explain conversion as a process of recovering from blindness to better sight.

On May 20, 1521, in a battle at the Spanish town of Pamplona, a cannon ball broke one leg of Iñigo López de Loyola, and wounded the other. With the incident, Iñigo had reached the bottom of what had been a rather shattered existence marred by loss and insatiable ambition. The man wounded in Pamplona was a 26-year-old orphan, who lost his parents at an early age. One of his brothers died in war. Another ventured to the Americas and never returned home. By the time of the battle of Pamplona, his new master and stepfather, Juan Velásquez de Cuéllar, the chief treasurer of the crown, who had introduced Iñigo to the court decorum and diplomacy, had lost his privileged position.

When confronted with a hopeless situation, Ignatius created greater intimacy with God.

Ignatius’ conversion took place during his long recovery from his injuries, as he read about the lives of the saints, like Francis and Dominic. Ignatius’ dreams transferred from heroic feats on the battlefield to heroically serving Christ. The bull of canonization on March 12, 1622, reported that Ignatius was called from worldly honors and earthly military service to a holy life that led to the founding of the Jesuit order and, ultimately, the consolation of souls worldwide.

While the general theme of this jubilee year is conversion, the underlying invitation related to this conversion is to “See everything new in Christ.” (2 Cor 5:17). To see “perfectly,” like Noguere, or to see everything new, like St. Paul, is to first acknowledge some form of blindness. Then, when touched by Ignatius’ relics—which is to say, once inspired by his experience and spiritual tradition—we will be able to let God console us, and so embrace our present and future with renewed hope and faith.

Our world faces new challenges. Covid-19 alone has shattered our normal ways of life. We need faith to be able to see anew. The 34th General Congregation of the Society of Jesus in 1995 declared that “without faith, without the eye of love, the human world seems too evil for God to be good, for a good God to exist. But faith recognizes that God is acting, through Christ’s love and the power of the Holy Spirit, to destroy the structures of sin which afﬂict the bodies and hearts of his children.”

The congregation was significant in part because it took place at a moment of self-examination for the Society. It was a moment in which, as Jesuits, as the congregation wrote, “we faced our limitations and weaknesses, our lights and shadows, our sinfulness.” Yet amid the brokenness of the world, the Jesuits, “also found much that was wise and good.” They were able to see everything new, and recommitted themselves to “follow this Christ, the Cruciﬁed and Risen Lord, in pilgrimage and labor.”

The true miracle might not be the immediate realization of prayers. It is, instead, the consolation that grows out of the deepening of faith in God.

The conversion of Ignatius was not completed instantly, following his fall in Pamplona. This incident, however, set a new course for his life. It turned his life upside down and forced him into self-examination. Out of this spiritual awakening, Ignatius had a burning desire for holiness and a zeal to do great things for God, which ultimately led him to a lengthy process of self-surrender.

The appeal of this conversion today is that when confronted with a hopeless situation, Ignatius created greater intimacy with God. As he renewed his relationship with God, he was able to refocus his unsettled existence. Ignatius put God at the center of his life. He could look at the world not with fear, but with hope and the desire to set it on fire with the love of Christ.

This Ignatian Year is not limited to Ignatius’ conversion but culminates with his canonization. His cause was bolstered by miracles attributed to his intercession, like Noguere’s recovery of sight through the use of relics. Though the language of relics and miracles itself might seem at odds with the extreme rationalism of our world, all of us are tasked to make these “relics” and miracles meaningful for our own time. As heirs of the Ignatian tradition, we are the guardians of Ignatius’ spiritual “relics.” We remain indebted to the rich Ignatian tradition, which, though rooted in medieval Christianity, boldly embraced the modern world. The opportunities offered by the world of Ignatius’ time shaped the Society of Jesus, which in turn helped transform the church and the way it reached out to the world.

St. Ignatius helped me get sober as a Protestant—and stay sober as a Catholic
Seth Haines

Miracles are still a part of our spiritual practice. When faced with a tragedy, an incurable disease, the loss of a job, a beloved friend or sibling, we may pray to God in the secret of our hearts to intervene. The true miracle might not be the immediate realization of our wishes or prayers for various needs. It is, instead, the consolation that grows out of the deepening of faith in God. The miracle is to believe that for those, like Ignatius, who believe in God and trust in God’s care and providence, there is no accident, no tragedy or failure that they cannot overcome. The bottom that Ignatius hit in 1521 became a stepping stone for greater adventures, self-realization and success. The church considered Ignatius’ journey from 1521 to 1622 exemplary for others.

In Africa and its growing church, there are ample reasons for hope, but also for despair. Celebrating a jubilee reinforces our hope that things can change for the better. The sick can be healed. Peace can be restored. The joy of the Gospel can blossom. The kings of Spain, France and Bavaria were able to put aside their bloody rivalries to push for the canonization of St. Ignatius. Like them, all Christians can help build a peaceful global community and create new networks of solidarity and friendship for the greater glory of God and the service of the poorest among us. To see all things new is to renew our commitment to Ignatius’ original vision of spiritual depth, love and service of the church and society. 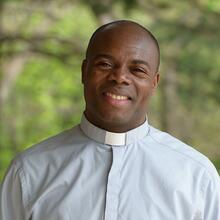 Jean Luc Enyegue, S.J., is a Jesuit from Cameroon. He obtained his doctorate from Boston University and is the director of the Jesuit Historical Institute in Africa, based in Nairobi, Kenya.