Explainer: Cardinal Tobin will now help Pope Francis pick bishops. What does that mean for the U.S. Church? 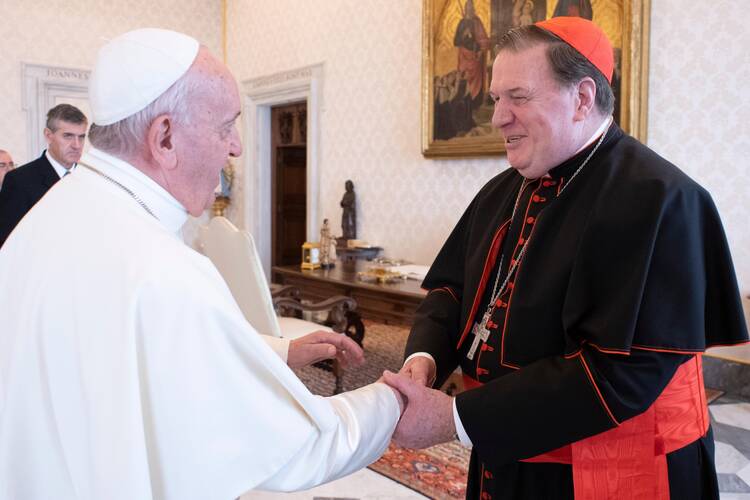 Pope Francis greets Cardinal Joseph W. Tobin of Newark, N.J., during a meeting with U.S. bishops from New Jersey and Pennsylvania in the Apostolic Palace at the Vatican Nov. 28, 2019. (CNS photo/Vatican Media)

Although the selection process for bishops is notoriously secretive—with newly appointed bishops often not learning they were candidates until they are chosen—the Vatican’s report on the career of the disgraced former cardinal Theodore McCarrick shed some light on the process when it was published in November 2020.

[Related: Can the Catholic Church find a better way to choose bishops?]

According to Father Reese, when a diocese needs a bishop, the Congregation for Bishops asks the papal nuncio, or ambassador, in that country to gather information on possible candidates and the needs of the diocese. The nuncio investigates the candidates and draws up reports, called ponenza, on three of them, which he sends to the congregation.

Then, the congregation meets to decide whether they will pass along the nuncio’s recommendations to the pope or ask the nuncio to search for other candidates. They may also bring their own recommendations forward. At this point, the bishops on the congregation generally defer to those most familiar with the diocese that needs a bishop: In the case of U.S. dioceses, they would look to Cardinals Cupich and Tobin.

Of course, popes do not always choose one of the three candidates presented by the congregation. In the case of former Cardinal McCarrick, Pope John Paul II’s advisors pressed him not to appoint Mr. McCarrick to the Archdiocese of Washington, D.C., but the pope insisted, a detail that was revealed in the McCarrick report.

Pope Francis generally appoints bishops who have, as he says, “the smell of the sheep”—that is, they have a good relationship with the people in their dioceses. He prefers bishops who have a reputation for humility and often chooses members of religious orders who have taken vows of poverty, like Franciscan Cardinal Seán O’Malley of Boston and Salesian Cardinal Óscar Maradiaga of Tegucigalpa in Honduras, to top posts.

Cardinal Tobin, a Redemptorist, fits those preferences, so his appointment should not come as a surprise. He was elected as superior general of the Redemptorists, a post he held from 1997 to 2009, and has previously worked in the Roman Curia, serving as secretary of the Vatican’s Congregation for Institutes of Consecrated Life and Societies of Apostolic Life from 2010 to 2012. He then became archbishop of Indianapolis, where he had a reputation for being accessible and compassionate.

Pope Francis generally appoints bishops who have, as he says, “the smell of the sheep”—that is, they have a good relationship with the people in their dioceses.

Pope Francis made him cardinal archbishop of Newark in 2017, a quick and unexpected appointment for a man who had only been a bishop for five years and one who would be leading a diocese not normally headed by a cardinal. Pope Francis has become known for these types of surprise appointments, bypassing larger dioceses and choosing cardinals from a larger variety of countries than previous popes.

Cardinal Tobin’s speedy rise through the hierarchy under Pope Francis is also a sign of the pope’s good relationship with the cardinal. The two have known one another since at least 2005, when they were in the same discussion group at that year’s synod of bishops in Rome. During his time in Newark, Cardinal Tobin has been known as a “Pope Francis bishop”—one who generally follows the pope’s lead in prioritizing social justice issues and dialogue over culture war flashpoints.

Most recently, he distanced himself from U.S. bishops’ president Archbishop José H. Gomez’s controversial statement on the inauguration of President Joseph R. Biden, which was seen by some in the Vatican as overly combative toward the nation’s second Catholic president. He issued a more conciliatory statement and told Catholic News Service that he could not understand “people who use very harsh words and want to cut off all communication with the president because of [his stance on abortion].”

During his time in Newark, Cardinal Tobin has been known as a “Pope Francis bishop”—one who generally follows the pope’s lead in prioritizing social justice issues and dialogue over culture war flashpoints.

In September, on the eve of the election, he had told the National Catholic Reporter, “I think that a person in good conscience could vote for Mr. Biden. I, frankly, in my own way of thinking, have a more difficult time with the other option.”

Cardinal Cupich, the other American on the Congregation for Bishops, had been the most vocal critic of Archbishop Gomez’s statement on the inauguration.

Both Cardinals Cupich and Tobin have emerged as key figures in the increasingly vocal minority of American bishops pushing back against what has been described as a “culture warrior” approach to politics by some  U.S. bishops. Pope Francis selecting them as his primary advisors for choosing American bishops speaks to his desire to steer the U.S. bishops away from a confrontational approach toward a pastoral one.

What remains to be seen is whether this appointment will help transform the bishops’ conference or merely deepen the divisions that already exist within it.