Top 5 Takeaways from the McCarrick Report 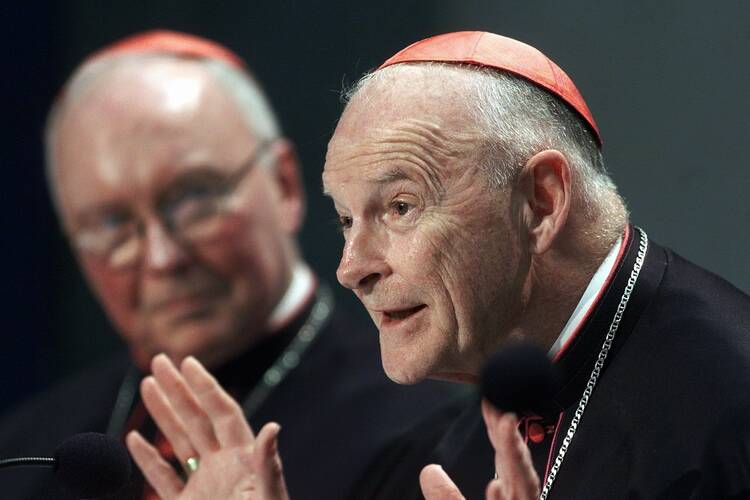 In this April 24, 2002 file photo, Washington Cardinal Theodore Edgar McCarrick, right, flanked by head of the Pontifical Council for the Laity at the Vatican Cardinal James Francis Stafford, speaks at a news conference at the Vatican concluding a two-day meeting between Pope John Paul II and U.S. cardinals at the Vatican. (AP Photo/Santiago Lyon, File)

Former Cardinal Theodore McCarrick sexually abused seminarians and minors for decades—all while being promoted through the church’s ranks at a remarkable speed. How did this happen?

Two years ago, the former papal ambassador to the United States released a bombshell letter blaming Vatican officials—all the way up to Pope Francis—of knowing about McCarrick’s abuse, ignoring it and choosing to promote him.

Today, the Vatican released an unprecedented, 400-page report on who exactly knew how much about McCarrick’s misconduct and how he was able to rise through the ranks.

Here are the top five takeaways from the report.

According to the report, no one complained to the Vatican about McCarrick until 2000, when McCarrick—by now a successful fundraiser who had been a bishop in New York and New Jersey—was about to be promoted to be the archbishop of Washington, D.C., and then made cardinal.

In 2000, Cardinal John O’Connor of New York summarized complaints against McCarrick in a letter sent to Rome.

The most damning accusation was that McCarrick had sexually abused children in the 1980s, a claim that was deemed credible in 2018. But the claim was not investigated at the time because it was made anonymously. It is unclear if this accusation made it all the way up to John Paul II.

The second claim was made by a former priest alleging he had caught McCarrick engaging in “sexual conduct” with another priest and that McCarrick had solicited sex from him as well. But this complaint was thrown out because the priest who made the accusation had been found guilty of abusing children and was deemed unreliable.

The last complaint was that McCarrick had shared a bed with seminarians and “young adult men” in New Jersey. The pope asked four New Jersey bishops to investigate this allegation, and they concluded that while McCarrick had shared a bed with the men, they could not confirm that he had engaged in “sexual misconduct.” That played a major role in the pope’s decision-making; but this report reveals that three of those bishops, all now dead, had given John Paul incomplete or misleading information.

The most damning accusation was that McCarrick had sexually abused children in the 1980s, a claim that was deemed credible in 2018. But the claim was not investigated at the time because it was made anonymously.

John Paul II also went forward with promoting McCarrick because he trusted him. The two had known each other a long time, and John Paul had experienced priests being falsely accused of all kinds of things when Poland was under Communist rule. So when McCarrick swore the allegations were false, the Polish pope believed him.

When Cardinal Joseph Ratzinger became Pope Benedict in 2005, he did not ask for McCarrick to be investigated because he assumed John Paul II had looked into the allegations, and Benedict trusted his predecessor’s judgment.

When more details emerged about McCarrick’s abuse of adult seminarians, as first reported by the abusive priest, Vatican officials under Benedict decided not to investigate but instead told McCarrick to retire after Easter 2006, which he did, and to start keeping a lower profile, which he did not do.

Those instructions to keep a lower profile are the closest thing to what Archbishop Carlo Maria Viganò described as “sanctions” in his 2018 letter, alleging a cover-up of McCarrick’s crimes at the highest levels of the Vatican. But the Vatican’s report says that they were not formal sanctions, and, different from what Archbishop Viganò claimed, the instructions did not prohibit McCarrick from celebrating public Masses. The main guideline was that he travel less and cut down on his public appearances, which seems not to have happened.

After Francis became pope, he learned about those instructions but not the reasons behind them, according to the report. He assumed that the robust travel schedule McCarrick had kept up fit with how Benedict wanted the guidelines to be applied, so he allowed things to keep going that way.

3. Viganò was told to investigate but did not.

While working in the Secretariat of State at the Vatican, Archbishop Viganò wrote two memoranda, in 2006 and in 2008, suggesting that a canonical process could be opened to determine the truth of the allegations and rumors about McCarrick’s misconduct. That investigation was never carried out.

4. Francis did not know McCarrick had abused children.

As already said, this Vatican report goes against Archbishop Viganò’s claim that Francis had known about McCarrick’s abuse. Archbishop Viganò’s claim hinged on a conversation he said he had with the pope in 2013, in which, he said, he told Francis about McCarrick. The Vatican report says that there is no documentation of that conversation happening, and if it did happen, the evidence is “sharply divided” on what was said.

The report states that between 2013 and 2017, McCarrick’s ongoing activities, as well as internal information about his alleged abuse, were raised on occasion with Pope Francis. But Francis did not hear that McCarrick was being investigated for abusing children until 2017.

As soon as claims of sexual abuse against a minor were found credible by an investigation led by the Archdiocese of New York, Francis removed McCarrick from ministry and demanded his resignation from the College of Cardinals. He was the first cardinal ever removed over sexual abuse.

What Francis did know is that McCarrick was rumored to have slept with and harassed seminarians. Rumors of that had been floating around the Vatican for a long time—so let’s talk about why nothing was done.

One big reason is that sexually abusing adults is not considered to be as grave as sexually abusing children. It is only in recent years that the Vatican’s anti-abuse measures have started referring to “vulnerable adults” in addition to children as potential victims. It’s also only in recent years that the Vatican has started putting in place measures for disciplining bishops who use their position of power to sexually abuse others. Bishops were largely left out of the Vatican’s first response to the abuse crisis in 2002.

While this report is a huge step in Vatican transparency, it leaves open the question of whether people who covered up McCarrick’s abuse or failed to thoroughly investigate it will face any punishments.

Another is that the claims about McCarrick abusing priests and seminarians were thrown out or minimized under John Paul II, either because of misleading reports from bishops, or because the claims were made anonymously or by people who were deemed unreliable. And, as we’ve described already, subsequent leaders built on that foundational failure. The good news is that there are now Vatican guidelines in place, as of last year, that require even anonymous claims to be investigated.

But this report has not solved everything—far from it.

The biggest open question is about accountability. While this report is a huge step in Vatican transparency, it leaves open the question of whether people who covered up McCarrick’s abuse or failed to thoroughly investigate it will face any punishments.

It also raises the question of whether this will set a new standard for transparency, or if the Vatican will simply revert to its usual way of operating. On both sides of the Atlantic, it raises some questions, including:

If there is one thing we have learned since the summer of 2018, the sex abuse crisis in the Catholic Church is not over. The Vatican’s report on the rise of McCarrick answers some questions—and raises many more.