Nobody at the Vatican wants Pope Francis to go to Iraq right now. Why is he so set on going? 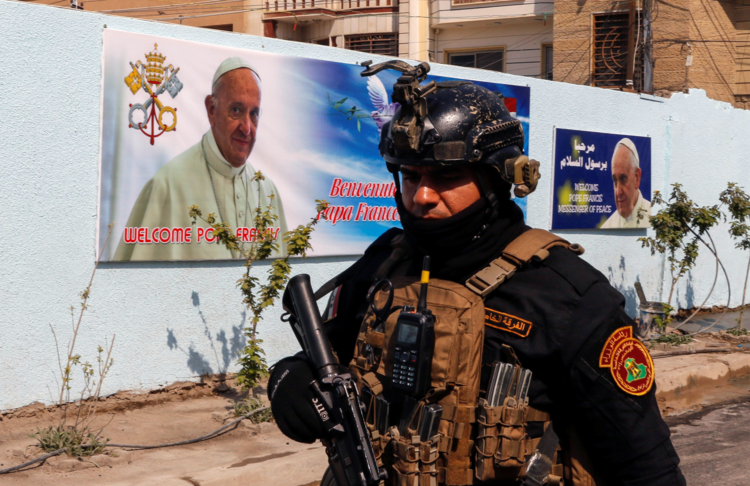 A security agent walks near posters of Pope Francis in Baghdad March 3, 2021. When the pope visits Iraq March 5-8, he will undertake a risky trip to a war-torn country that has seen recent rockets attacks and is surging with new COVID-19 cases. (CNS photo/Khalid al-Mousily, Reuters)

Pope Francis is about to embark on a historic trip to Iraq, Friday, March 5. When he lands in Baghdad, he’ll meet with Iraqi President Barham Salih, then zigzag across the country at breakneck speed visiting religious leaders and cities that are still recovering from the destruction wrought by the Islamic State.

The trip is extremely risky. Iraq has seen a massive spike in coronavirus cases as new strains of the virus have been detected. There has also been an uptick in violence: 32 people were killed in a suicide bombing in Iraq in January and, just two weeks ago, there was a projectile attack on a military base inside the Erbil airport, where Pope Francis is set to meet representatives from Iraqi Kurdistan. Just today, ten rockets hit a military base in western Iraq.

Gerard O’Connell, America’s Vatican correspondent and a host of the “Inside the Vatican” podcast, will be traveling with the pope on this trip. “If you listen to people in the Vatican, top senior people, nobody has been encouraging him to go. They say, wait, wait, postpone!” Mr. O’Connell said on this week’s special episode.

But Pope Francis has insisted on going forward with the visit, despite the risks to himself, to those traveling with him and to the Iraqis who will gather to see him. So, the big question is, why? What is driving Pope Francis to enter a war zone, during a global pandemic?

This special deep dive episode of “Inside the Vatican” delves into the pope’s two main objectives for the trip: to encourage the few Christians who remained in Iraq through ISIS’ occupation and to help heal some of Iraq’s most fractured relationships by building dialogue with Shia Islam.

A Rich History, An Uncertain Future

Christians in Iraq trace their roots to the apostle Thomas, who performed baptisms and set up Eucharistic communities throughout the region. But Dr. Amir Harrak, a professor of Aramaic and Syriac studies at the University of Toronto, explained that ISIS destroyed important medieval churches, monasteries, manuscripts and artwork in their effort to obliterate anything that did not align with their extremist vision of Islam.

While Dr. Harrak managed to leave Iraq in the 1970s to pursue his education, others were not so lucky. Rashel Groo, a Catholic university student in Erbil, lived through the ISIS takeover of her home city, Qaraqosh, in 2014. On the podcast, she describes the night her family fled: “We don’t know what happened that night. We did not even take anything with us. During very few hours, we left our houses [and did not come back] for three years. No one imagined that would happen.”

Along with a handful of other Christians, Ms. Groo’s family has begun to resettle Qaraqosh, but the task has not been easy. They only have electricity and running water for a few hours a day, which makes it difficult for Ms. Groo, a computer science student, to imagine a future for herself there. Almost 40 percent of Iraqis are under the age of 15 and have lived their entire lives surrounded by conflict. Iraq faces what could become a mass exodus of young people.

Pope Francis wants to go to Iraq to show these young people, especially Christians like Ms. Groo, that they have made the right decision by staying and that they can help heal their country.

An Embrace to Heal Divisions

Healing Iraq’s wounds will require reconciliation. Although Muslims and Christians have lived side by side in Iraq in relative harmony for centuries, and although ISIS targeted Muslims as well as Christians, tensions between the groups have increased as trust has eroded.

“What Christians and Muslims are trying to do in Iraq is really pick up the pieces,” said Jordan Denari Duffner, a scholar of Muslim-Catholic relations and the author of Finding Jesus Among Muslims: How Loving Islam Makes Me a Better Catholicand Islamophobia: What Christians Should Know (and Do) about Anti-Muslim Discrimination.

Jordan Denari Duffner: “What Christians and Muslims are trying to do in Iraq is really pick up the pieces."

Pope Francis wants to help that process along. On Saturday, he will meet with one of Shia Islam’s most revered leaders, the Grand Ayatollah Ali Al-Sistani. The ayatollah has focused on peace and justice, encouraging Iraq’s Muslims to join the fight against ISIS and to protect religious minorities like Christians and Yazidis who faced what former U.S. Secretary of State John Kerry called a genocide.

Although what will be discussed in the meeting has not been made public, “the meeting itself is the message,” Ms. Denari Duffner said.

Already, street art of the pope and the ayatollah have gone up all over Najaf, Iraq’s holiest city, where the two will meet. One, Ms. Duffner said, called it a meeting of the church bells and the minarets, the towers from which Muslims are called to prayer. A Shia poet said that the baba of Christianity and the baba of Islam would embrace, playing on the similarities between the words for “papa” and “pope” in many languages.

But a trip so highly anticipated by both Christians and Muslims brings with it great risk during the current pandemic. Ten thousand people are expected to gather for Pope Francis’ Mass in a stadium in Erbil that has a capacity of 30,000, raising the risk of coronavirus transmission and creating a possible target for terrorist attacks.

Asked March 2 at a press briefing by multiple journalists how the pope could justify putting so many people at risk, Vatican spokesman Matteo Bruni emphasized that most of Iraq’s population is young and thus at lower risk for severe cases of coronavirus, and that the Vatican believes the trip can be carried out safely. They explained that the pope likely will be traveling in an armored car rather than an open one, like the popemobile, which could cut down on crowds gathering. They also expect that people will respect social distancing guidelines.

Despite the risks, Mr. Bruni said, the pope sees this trip as “an act of love for this land, this people, and its Christians. Every act of love can be interpreted as extreme… This doesn’t mean in any way to lose sight of the consequences of one’s actions, but it is possible in this regard to measure the need of the other to receive that love, attention and consideration.”

Gerard O'Connell: “We’ve got the vaccination, but we realize that it’s a country that’s not at peace. We realize that many things can happen.”

America’s Vatican correspondent, Gerard O’Connell, will be one of the journalists traveling with the pope. “Nobody is blind to the reality,” Mr. O’Connell said. “We’ve got the vaccination, but we realize that it’s a country that’s not at peace. We realize that many things can happen.”

“You’re doing your job and you try to do it well, and then you hope that the best comes out of it. And so we pray. I hope our listeners will pray as well for us as we go in. And I’m hopeful that the visit will be a big boost to the people there, a big boost to peace, and that it will impact across the Muslim world but also the Christian world.”

More from America on Pope Francis’ trip to Iraq

1
It isn’t just the priest’s fault: Six tips for lay people for a better homily experience
Terrance Klein
2
On abortion, a lasting political compromise might be impossible
Robert David Sullivan
3
It’s hard to love people who don’t share your values, but it’s our Christian call to try.
Terrance Klein
4
The spiritual discipline of missing out on things
Jim McDermott
5
The little-known saint behind Pope Francis’ approach to the development of doctrine
Carol Glatz - Catholic News Service