An open letter to Joe Manchin, a pro-life Democrat and the most powerful senator in Washington 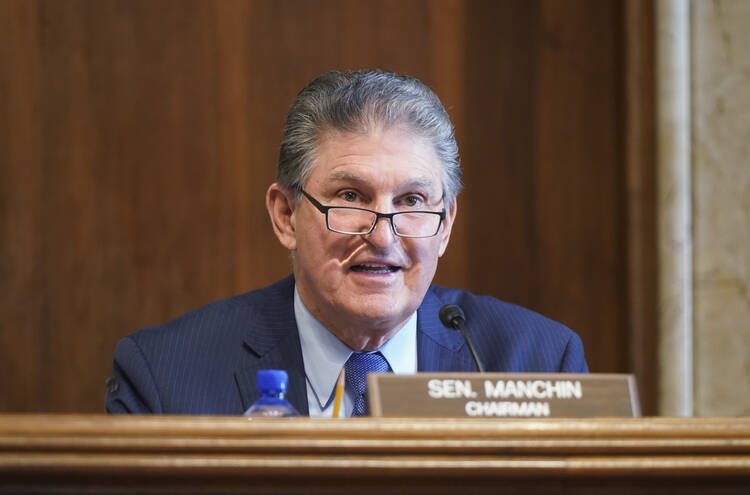 Sen. Joe Manchin, D-W.Va., speaks during a Senate Committee on Energy and Natural Resources hearing on the nomination of Rep. Debra Haaland, D-N.M., to be Secretary of the Interior on Capitol Hill in Washington, Wednesday, Feb. 24, 2021. (Leigh Vogel/Pool via AP)

First, a big thank-you is in order. I can be very cynical about U.S. national politics, but you are one of the politicians to whom I can point and say, “There’s someone with the courage of his convictions. There’s someone who is willing to buck the licked-finger-in-the-wind approach that prioritizes pollsters over principle.” I say this as someone who firmly upholds a consistent life ethic and who could not be more frustrated at our politics’ incoherence with regard to human dignity.

When I was on the board at Democrats for Life, we were always impressed with your commitment to protect and support human dignity at all stages of life and across all political issues. You are a champion for prenatal justice who has supported the Born-Alive Abortion Survivors Protection Act, the Pain-Capable Unborn Child Protection Act, conscience protections in health care, and the Hyde Amendment. You have also been a firm supporter of the Affordable Care Act, and of expanding the protections of Medicaid (particularly during the pandemic), as well as an advocate for labor unions and against Republican tax cuts for the wealthy.

You are one of the politicians to whom I can point and say, “There’s someone with the courage of his convictions.”

My first reason for writing this open letter is to help draw attention to this beautiful and consistent vision of human dignity—one that is so consistent with the vision of Pope Francis—as a model for others to follow.

But my second reason for writing is to urge you to hold firm to your convictions at a time when I imagine it is quite difficult to do so. As the swing vote in a Senate divided 50/50, when so much massive legislation is pending, you are likely getting hyperpartisan, well-monied interests both attacking and wooing you near constantly. I cannot imagine what that must be like, but I want you to know you have millions of people in strong support of the vision you have stood for your whole life.

And we couldn’t be more proud and hopeful that, as CNN rightly said, you are now the most powerful senator in Washington. I hope that, despite the immense pressures, you are embracing this new role with confidence. And not just the confidence that comes from the courage of your Christian convictions and living out the fullness of the Gospel of Jesus Christ, though that is certainly enough. But also the political confidence that comes from a polity that doesn’t fit at all with the right/left, red/blue binary imagination our news and social media assumes.

As the swing vote in a Senate divided 50/50, you are likely getting hyperpartisan, well-monied interests both attacking and wooing you near constantly.

Gallup recently found that support for a third party is at an all-time high. A whopping 62 percent believe that the two major parties “do such a poor job representing the American people that a third party is needed.” In particular, millions of voters who identify as socially conversative and economically progressive have no political home. But they do have your example. Please know that they are cheering you on, now more than ever.

And I, of course, don’t need to tell you what a big moment it is. As the swing vote on so many issues, you now have the opportunity to express a vision of human dignity in a way that, frankly, has never been seen in U.S. politics.

In spending packages, for instance, you will have the chance to increase an absurdly low $7.25 federal minimum wage, while at the same time ensuring that new federal monies are not funding abortion by making sure that the Hyde Amendment applies. With legislation like the Equality Act coming to the fore, you will have the chance to make sure L.G.B.T.Q. populations have their civil rights firmly protected while also assuring religious freedom for all—especially by making sure that prohibiting discrimination on the basis of sex doesn’t mean forcing doctors and hospitals to perform the terrible violence of abortion.

We need to totally overhaul the physical structures of nursing homes and eldercare centers.

There is also likely to be a major infrastructure bill that you will help shape rather dramatically. And here I have a specific recommendation that fits very well into your vision of human dignity that refuses to choose between the right and the left.

Obviously, we have crumbling infrastructure that is not ready to meet the challenges of the coming decades. From broadband and green energy to roads, bridges and airports, we are woefully behind other developed countries and need job-creating programs to catch up. But the pandemic has revealed perhaps the most dramatic infrastructure decay of all: that which supports our elderly. We must build upon the outrage we experienced in response to the horrors of the coronavirus pandemic to build up an eldercare infrastructure that both (1) gives families the resources to take care of their beloved elderly at home and (2) totally rebuilds our nursing-home system.

We need to totally overhaul the physical structures of nursing homes and eldercare centers both to prevent serious infections and to allow for more genuine encounters between residents and visitors, during a pandemic but also in “normal” times. Intentional community-planning to bring families and generations together in spaces with the elderly should be a very high priority.

Stand firm. The time is now for your consistent pro-life vision of human dignity shine.

But the most important places of encounter with and for the elderly, of course, is in our own homes. Instead of capitulating to a throwaway culture in which elders are abandoned in waystations of death, we need to empower families to take care of loved ones. We should reimburse families for taking care of the elderly in their home and incentivize professional staff to do the same. We should also make job-creating grants available to families for remodeling their homes or even adding additions as a means of caring for elderly family members. This makes fiscal sense, given that it is far less expensive to care for an elderly person at home rather than in a hospital or nursing home.

This focus on infrastructure for achieving elder justice, Senator Manchin, couldn’t be more in line with your own consistent “pro-life for the whole life” vision. It is pro-family, pro-worker and pro-elder. It builds a culture of encounter across generations. And, significantly, it offers an alternative vision of eldercare than the horrific one we have seen during the pandemic. Our collective witnessing of this horror, frankly, is one that I am deeply worried will push the country toward acceptance of physician-assisted killing as an acceptable response—unless we offer an alternative vision.

Let me close this letter with another reminder of the broad support you have. Over the coming days and weeks it may not feel like it, but it is there. And it is strong.

Stand firm. The time is now for your consistent pro-life vision of human dignity to shine.