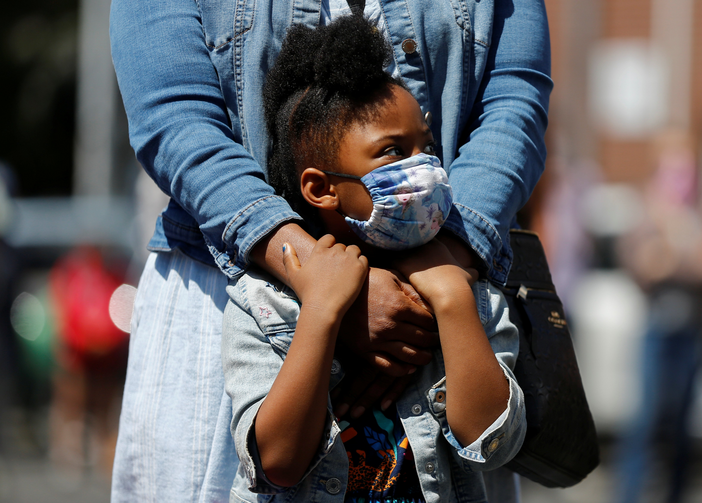 A mother and child are seen in this illustration photo. (CNS photo/Lindsey Wasson, Reuters)

A consortium of Catholic foundations is using its collective giving-power to push for stronger safeguarding measures aimed at protecting children and vulnerable adults from sexual abuse, misconduct and harassment.

The Commitment to Child and Vulnerable Adult Protection initiative, launched by Foundations and Donors Interested in Catholic Activities, or Fadica, “seeks to protect vulnerable persons by building safer organizational cultures through specific steps outlined in its Funder Safeguarding Pledge,” according to the organization.

A group of 17 foundations—which fund at least hundreds of nonprofit organizations and which manages assets collectively totaling more than $48 billion—has signed onto the initiative, which includes a pledge for internal review of safeguarding measures, resources for grantees to enhance their safeguarding practices and free seminars and a limited number of pro-bono consultation hours for nonprofit organizations seeking assistance.

A consortium of Catholic foundations is using its collective giving-power to push for stronger safeguarding measures aimed at protecting children and vulnerable adults from sexual abuse.

The multi-year program includes a pledge that participating foundations sign that has four components “centered on the idea of building safeguarding engagement opportunities between foundation personnel and grantee partners.” Signing the pledge gives foundations that are members of Fadica and the organizations they fund access to training and feedback from safeguarding experts, including individuals from Praesidium, an organization that has worked with Catholic dioceses on abuse prevention for many years.

The pledge states that foundations “will ask vital questions of grantees and applicants related to safeguarding” and require that organizations working with children or vulnerable adults who receive grants “to participate in safeguarding training” and eventually enact “policies and practices in place to support child and vulnerable adult safety, before funding is granted.”

“By publicly committing to safeguarding, funders communicate their support for a broader culture change that enhances the protection of children and vulnerable adults. This level of funder engagement has the power to change cultural norms, so that asking for a safeguarding policy becomes as ordinary as asking for a financial audit,” Fadica states on its website.

The initiative aims to fill a gap in which organizations affiliated with Catholic dioceses are often able to receive training resources at no cost, whereas independent nonprofit organizations with Catholic missions may not have resources to devote to safeguarding efforts. Four Fadica-affiliated foundations have pledged to support the initiative for at least three years.

Speaking at an event on Feb. 26 announcing the new initiative, a survivor of clergy sexual abuse, Juan Carlos Cruz, called the commitment from foundations “tremendously important.”

The head of one of the foundations helping to fund the initiative cited “a tremendous values breakdown” that contributed to the church’s widespread sexual abuse crisis and said that foundations can help ensure that a vast range of organizations are equipped to protect children and vulnerable adults.

“It’s not enough just to have compassion, not enough to see if something is right or wrong,” said Peter Laugharn, the head of the Conrad N. Hilton Foundation. Foundations can help the organizations they support by providing resources to enact best practices, connect with experts in the field of safeguarding and be a credible partner across ideological and political lines. Plus, he said, “we have the resources to do this over a medium to long haul.”

Juan Carlos Cruz, an abuse survivor, said the increased attention to safeguarding by foundations will help ensure that “others are not going to go through what I went through.”

Following the publication of a Pennsylvania grand jury report in 2018 that chronicled mishandling of abuse allegations by Catholic bishops, and the fallout from the Vatican’s cover-up of sexual harassment and misconduct by former Cardinal Theodore McCarrick, some Catholic organizations pressed for greater transparency and protections.

Maria Robinson, who chairs the board of Fadica, said during the launch event that foundations can play a unique role in helping other organizations create cultures that take child protection seriously.

“This is one of the best ways to leverage philanthropy to promote a culture of safety,” said Dr. Robinson, who is also part of the Raskob Foundation for Catholic Activities, which signed onto the new initiative.

Mr. Cruz, the abuse survivor and victims advocate, said the increased attention to safeguarding by foundations will help ensure that “others are not going to go through what I went through.”