Pope Francis expects to die ‘in Rome, as pope, in office or emeritus’ 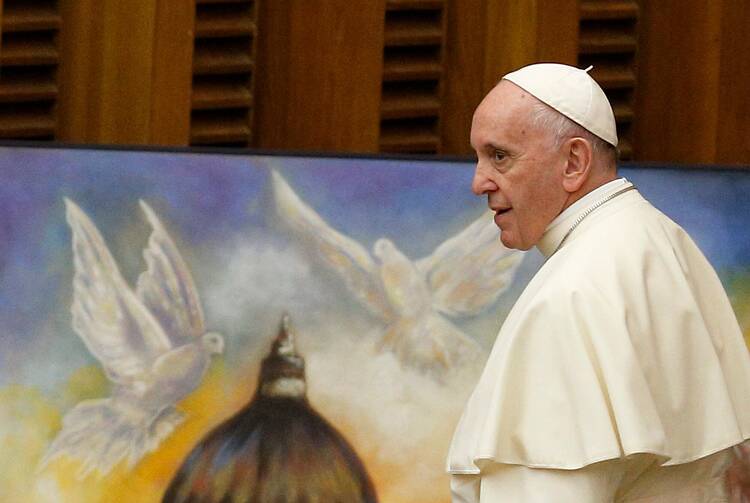 Pope Francis walks past artwork showing the dome of St. Peter's Basilica and two doves during his general audience at the Vatican in this Aug. 8, 2018, file photo. (CNS photo/Paul Haring)

Pope Francis expects to die “as pope, either in office or emeritus. And in Rome. I will not go back to Argentina.” He revealed this in an interview with renowned Argentinian journalist and doctor, Nelson Castro, for a new book on the health of the recent popes from Leo XIII to Francis that will be published in Buenos Aires on March 1.

When Dr. Castro asked him if he thinks about death, Pope Francis said “Yes.” Asked if he fears death, he responded, “Absolutely not.” Answering other questions, he said he expects to die “in Rome, as pope or emeritus.” He also made clear he would be buried in the eternal city and not, as some have suggested, return to be buried in Buenos Aires, where he spent most of his life.

He also made clear he would be buried in the eternal city and not, as some have suggested, return to be buried in Buenos Aires, where he spent most of his life.

An excerpt from that interview was published today, Feb. 27, in La Nacion, the Argentine daily that the pope used to read when he was archbishop of Buenos Aires. In the excerpt from an interview in the Vatican’s Apostolic Palace, on Feb. 16, 2019, Francis speaks about the surgical removal of cysts from the top lobe of his right lung in October 1957 when he was 21 years old. Significantly, however, Francis again confirms that he made “a complete recovery” from that operation, “and never felt any limitation since then.”

Nevertheless, some have written, and continue to write, that he has only one lung, but this is false. As Dr. Castro reports in his book, and as I did in my book The Election of Pope Francis, the rumor that he has only one lung circulated in the 2013 conclave in the Sistine Chapel when it was becoming clear that he would be elected pope. Some cardinals saw it as a deliberate attempt by other electors to block his path to the papacy, so much so that he had to deny the rumor twice on Mar. 13 when questioned separately by two cardinals.

In the excerpt published in La Nacion today, the pope states that he “never” underwent psychoanalysis as some have reported. He confirms, however, that he visited “a great woman psychologist,” once a week for six months, during the period when he was taking great risks in assisting people to escape during the military dictatorship in Argentina, and she helped him deal with the tensions and fears that he experienced at that time.

He admits in the interview that sometimes he suffers from “neurotic anxiety,” but states that he has largely learned to overcome such anxiety by listening to Bach or sipping “mate,” a popular Argentinean herbal drink.

In the full interview in the book, Francis also talks about his problem with sciatica and explains why he rejected undergoing an operation to deal with this when he was archbishop of Buenos Aires. He also reveals that he suffered a kind of pre-cardiac attack problem during his time as archbishop, but that was resolved. He speaks about some other ailments too, but concludes that he is well cared for now and is in fact in good health for a person of his age.

Nelson Castro reveals that it was Pope Francis himself who suggested in 2017, when he visited him in the Vatican, that he should write a book on the health of the popes, and he promised to give him an interview on his own health for this work. The title of the book is La Salud de los Papas: Medicina, complots y fe, desde Leo XIII hasta Francisco (“The Health of the Popes: Medicine, plots and faith, from Leo XIII to Francis). Published by Sudamericana, the book examines in depth the long illness of John Paul II, the sudden death of John Paul I, the problems Paul VI had with a prostate operation, the agony of John XXIII’s death, the health problems of Pius XII, the false news of the death of Benedict XV, the legend of the poisoning of Pius XI, the pain of war that drove Pius X to his death and the longevity of Leo XIII. Significantly, Dr. Castro was allowed to have access to the Vatican Secret Archives for this well researched book that is sure to gain a wide readership.