Why I left the church — and why I came back 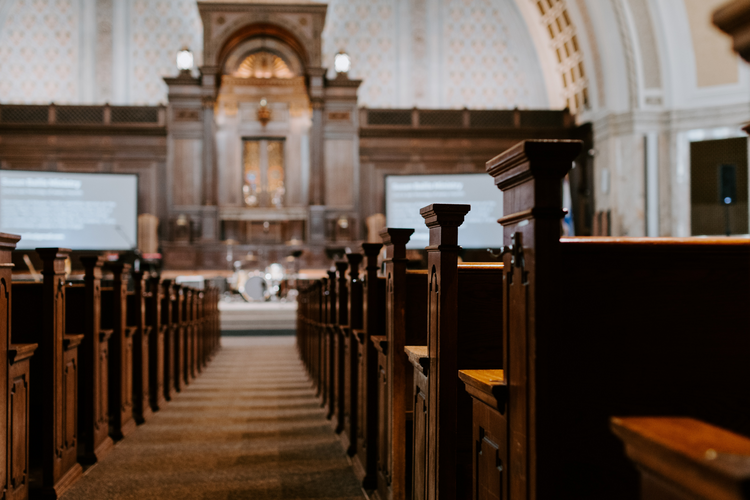 Here is a little story about how I left the church, sort of, and then came slouching back home, more or less.

The late, occasionally great Mad Magazine once published a bit that showed people’s secret thoughts. A scene looks one way from the outside but is very different and allegedly very funny on the inside. The one I remember showed the inside of a church. The congregation piously bows their heads, apparently engaged in placid worship. But on the inside, the well-to-do man is freaking out over gambling debt, the adolescent boy is slavering over a sexy fantasy and the teenage girl is desperately praying for a negative pregnancy test. It is just as well I don’t remember what the priest was thinking.

This was supposed to demonstrate that religious people are a bunch of hypocrites who pretend to be righteous and clean but are actually a mess on the inside. Har har, religious people! Look how they live.

The cartoonist was, of course, not making this up. When my parents had found Jesus but not yet the Catholic Church, my poor mother was perpetually humiliated when people visited our shabby, disorderly home. She was overworked, outnumbered and struggling with undiagnosed thyroid issues. And their allegedly Christian landlord thought laundry lines made the outside of the house look tacky, so whatever my mother did, she did it fighting her way past a line of damp diapers drying slowly over the hot air vent. A poor substitute for the mighty wind of the Holy Spirit that they sought.

This is literally what the church is for: So you can have a house to be a mess in.

But conversion happens stepwise. She knew her fellow Christians believed that outward disorder and chaos were caused by secret sin, so if anyone came to her door, she fell into the habit of making excuses. “Sorry about the mess,” she would say, and then explain that someone had been sick or they just got back from a trip. Here was always some temporary, mitigating factor that explained the general chaos.

Then one day, she didn’t. Someone came over and saw their typical chaos, and what came out of her mouth was: “Sorry it’s such a mess. This is just how we live.”

I don’t know how long after that moment she began to feel a pull toward the Catholic Church, but this moment in our family mythology feels like a very Catholic moment. This is literally what the church is for: So you can have a house to be a mess in. It is your house; you are a mess. Why try to deny it?

At home in the Catholic Church, we are a mess, and we cannot seem to help opening the door to show all comers our own weaknesses and sins and hypocrisies.

But as I write this paragraph, it feels a bit like I am distilling the faith down to an Etsy-worthy wall hanging for suburban moms: Bless this mess, Lord!

But the mess of the church is no adorable, kid-style mess, with couch cushion forts and colorful alphabet blocks strewn around the rug. It is the sex abuse scandal, which continues to break and break and break on the shore like a punishing, never-ending tide. It is the scandal of pastors and bishops pitting faith against science. It is the scandal of open disobedience and contempt for basic doctrine. It is the general crappiness and malaise and infighting of Catholic culture and Catholic social media. It is the disorder where culture, tradition, doctrine and lived experience all try to inhabit the same living space. This is how we live, and it is a mess, and the mess goes down deeper than I thought.

A number of personal experiences have widened some cracks in my life that used to be manageable. I used to think my personal faith-house was rock solid. It is not. It was shored up with 10,000 little pebbles, and some of them carried a bigger load than they should have. Many of them have been swept away, and when I look at what’s left, I don’t even know what to call it. “Mess” seems inadequate. It’s nothing comfortable or homelike, anyway.

I tried having recourse to a kind of wry acceptance of the mess I saw. I tried to call it “authenticity” and be content with a kind of hashtag spirituality that sees beauty in disorder and the promise of light through every crack. Bless this mess! This is just how we live!

But the cracks kept widening, and after a while, I couldn’t stand it. I couldn’t make sense out of living this way. So I left the church. I doubt anyone noticed, but I did. I went through the motions for the sake of stability in my family, but on the inside I stepped right the hell away from Jesus and the whole mess of the church, and I stayed stepped away.

I already knew that there was not more order elsewhere, outside the church. There are just other kinds of hypocrisy but without a remedy—other kinds of honesty but the kind that reveal emptiness rather than a way forward. The wind that blows outside the walls Catholic is mean and desolate, and it scours everything fertile off the face of the earth, and that’s all there is. I knew this. But I thought that, knowing what I knew, I could find my way and put together a life that was livable. I thought I could take a break from Jesus and get my thoughts together, step away from this mess, figure out who I was and what I was supposed to be doing.

As soon as I decided to try, I heard a voice telling me I ought to try to live. So that is what I did.

So here’s what happened. When I stepped away from the church, there wasn’t just silence. There was a voice telling me I should figure out how to die. Sometimes it was loud and sometimes it was soft, but that was the one thing it knew how to say, and it said it all the time.

I dealt with it as long as I could, until I couldn’t anymore. It was either listen to that voice, or listen to something else. So I decided I would try, grudgingly, angrily, to see if there might be a way back. As soon as I decided to try, I heard a voice telling me I ought to try to live. So that is what I did.

And it’s been a mess. Everything is a mess, and I hate it. But I am still listening to someone who thinks I should be alive, no matter what else goes on. I am not telling you anyone else’s story but my own. He believes I should live.

At Pentecost, after the mighty wind came that fed the steady flames inside the walls of that home, Peter echoed the prophet Joel, warning the crowd of horrible times to come, when the world would be torn apart:

I will show wonders in the heavens above and signs on the earth below, blood and fire and billows of smoke.

The sun will be turned to darkness and the moon to blood before the coming of the great and glorious day of the Lord.

And everyone who calls on the name of the Lord will be saved.

White working-class adults are leaving our churches. What can we do to keep them?
David Clay

That’s it. That’s the thing that doesn’t change: the power of calling on the Lord. There is no other plan. Prayer and sacraments, over and over and over again in the midst of this horrible mess, until everything weak is gone and only what is unshakeable remains.

It’s awful when you call on the Lord and he gives you a hard and painful way to live, but at least it’s a way to live. He thinks you should live. I like that better than what I heard that other voice saying to me.

So here is my prayer, as Lent picks up speed: Lord, do not bless this mess. Sweep it away and give me something better. I’ll wait here.