How Joe Biden’s Catholic faith will shape his relationship with Pope Francis—and the U.S. bishops 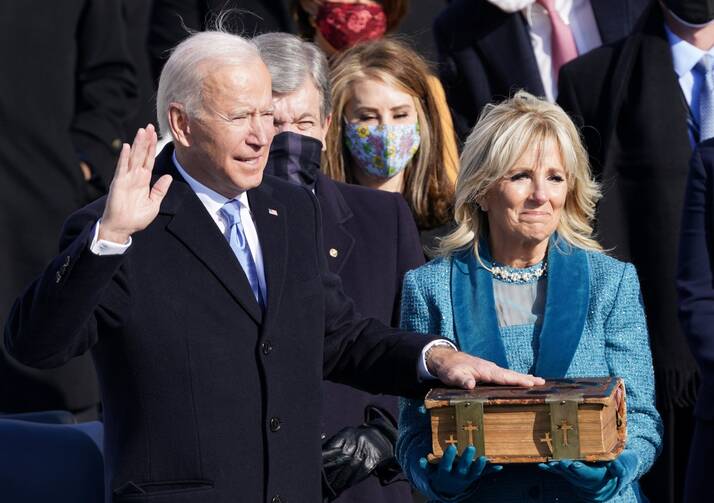 When Joe Biden was sworn in as the nation’s 46th president, he became just the second Catholic to hold the office, after having been just the fourth Catholic to be nominated by a major party. (Democrats nominated Al Smith in 1928, John F. Kennedy in 1960 and John Kerry in 2004.) A theme of Mr. Biden’s inauguration speech was healing the deep divisions in the United States, but the theologian and historian Massimo Faggioli argues in his new book that polarization in the church is also a challenge to Mr. Biden’s presidency.

In Joe Biden and Catholicism in the United States, Mr. Faggioli explores how Mr. Biden’s faith played a central role in his campaign, how U.S. Catholics challenging Pope Francis could also cause headaches for the Biden administration and why he thinks the Vatican and United States are poised to work together in the immediate future to protect democracy and stability throughout the world.

Below is a telephone interview with Mr. Faggioli, which has been edited for length and clarity.

You wrote that “the country has no problem with [Mr. Biden’s] being Catholic, but a not-insignificant segment of the American Church—from among its bishops, its clergy, and its faithful—has a problem with his Catholicism.” What do you mean by that?

In my research on the previous Catholic candidates for president, it was clear that there were Catholics who were not really happy with those candidates, but it never became an inter-Catholic issue during the campaigns. After the election of Kennedy, having a Catholic president was a moment of pride and unity among Catholics. That’s something you don’t find now because the culture wars, whatever that means, have really reshaped political parties and churches, including the Catholic Church. Right now what drives the religious identity in this country is not being a Catholic, being a Protestant or being Orthodox but what kind of Catholic, what kind of Protestant, what kind of Orthodox.

This is something that Biden will have to navigate that John Kennedy never had to deal with. This could be an obstacle, but it could also be an advantage in that there are very few other Catholics in the public square who have as credible a faith as Biden’s. You may agree or not with him politically, but he’s authentic; he’s not fake; he’s not playing church.

“Biden made his Catholic faith a central part of the campaign,” you write in the book. How did he do this? To whom did it appeal?

I think it’s clear especially if you compare his campaign to the four previous Catholic candidates. Each of them had to make their Catholic faith private. Because their faith was under attack during their campaigns, their defensive move was to say, “I’m Catholic, but it really doesn’t matter to my politics.” That’s something Biden didn’t do and didn’t have to do because there’s no longer a massive anti-Catholic movement in this country.

You could see by the way he mentioned important Catholic figures like Pope John Paul II and Pope Francis, and when he mentioned the German Jesuit Alfred Delp, who was executed by the Nazis. This was not a campaign play because it’s something you’ve always seen in Joe Biden, like in his interviews with Stephen Colbert, so that came out quite naturally during the campaign.

You may not agree with Joe Biden on all issues, but I sense that many American believers can see something in his faith that is true, that is authentic in him.

This is part of the appeal because you may not agree with Joe Biden on all issues, but I sense that many American believers can see something in his faith that is true, that is authentic in him.

Are there similarities between Mr. Biden and Pope Francis that may help a working relationship?

Contrary to the times of Al Smith or John Kennedy or John Kerry, right now there is a very good common ground between the White House of Biden and the Vatican.

[They share] the fact that Biden and Pope Francis were elected to the highest office when they were almost in retirement or even beyond retirement and they are representatives and leaders of two very divided communities. But the most important thing they have in common is the Catholic opposition against one is almost the same as Catholic opposition against the other.

Biden and Pope Francis were elected to the highest office when they were almost in retirement or even beyond retirement and they are representatives and leaders of two very divided communities.

So there’s a very significant overlap—ideologically, culturally, politically—between the Trump movement domestically and the anti-Francis movement. Since 2015, I believe they have been inseparable. So they will understand that they have a common thread, a common antagonist.

And this will help, I believe, shape a good relationship in the short- and medium-term. In the long-term, the Vatican and the West, they still have important differences. And those differences will emerge in time, I believe, but not right now, because the emergency threat against democracy, against the certain stability, is so serious that all long-term differences will be set aside for a while.

I’m curious if Mr. Biden being Catholic is a pro or a con when it comes to his relationship with the Vatican, specifically around some of the life issues where there are clearly differences in opinion.

Historically, it is a problem or it can be an obstacle. But not right now, I think, only because of Francis. Pope Francis has never used the same language of social conservatives on abortion. And so there is there is clearly a difference between the language of the Democrats and the Catholic Church on abortion. But there is also a difference between the way the Vatican right now talks about abortion and the way Republicans talk about abortion. And so this is different now from what it was like with John Kerry and John Paul II and Barack Obama and Benedict.

Both Biden and the Vatican have problems with U.S. bishops, and this is a serious problem. They understand each other because they face an isolated U.S. episcopate that has become impossible to deal with, both for the pope and the Catholic president.

You say U.S. bishops denied Biden any kind of honeymoon, even acting somewhat antagonistically after his election when they formed a special working group to consider how to work with a Catholic president. How do you expect this will impact relations between the U.S. church and the new president?

Well, we don’t know. We have heard nothing more about the working group.

I believe that a change of language is required. But what it takes is something that I don’t see happening yet, which is, indeed, rethinking what happened in these last few years. Honestly, I never expected the U.S. bishops to say to Catholics, “go vote for Joe Biden.” I never expected that. But it was also unexpected to see the kind of blindness that there was, not in all of them, but especially in some of them, until the very end of the Trump presidency as to what [the former] president meant for many Catholics, especially Latino Catholics and African-American Catholics.

I don’t believe it helped the cause of the Catholic Church in this country to look hostile to a Catholic president from day one.

So there has to be some kind of historical and moral reckoning with the failure in understanding what was happening. And that’s when they can understand and learn more how to deal with a president who is not perfect, as a Catholic or as a politician. But certainly, I don’t believe it helped the cause of the Catholic Church in this country to look hostile to a Catholic president from day one. This can only damage the church and can do very little to help Catholics influence, rightfully, decisions on life issues.

Do you see any bishops who are friendly to the incoming administration? Will they have a role to play in speaking for U.S. Catholics?

I think they will. Especially [Cardinal] Wilton Gregory because he’s the ordinary of Washington, D.C., but also [Chicago archbishop] Cardinal Cupich, [Newark archbishop] Cardinal Tobin, Bishop McElroy [of San Diego]. But it’s a small group, honestly. But I believe they will play an important role. But honestly, it will be few bishops, but also the Jesuits in this country, as well as other Catholic voices that are not necessarily bishops or clergy. I don’t see a swift turn of the U.S. bishops in the next few weeks or months. I don’t.

What gives you hope about the new administration?

What we saw on Tuesday evening at the memorial service for the victims of Covid in Washington, D.C., is a great sign of hope. The symbolical and spiritual resources of this country are immense, and Joe Biden has demonstrated already his ability to draw from them.