Joe Biden quoted Augustine in his inaugural address. What would the saint think of our politics? 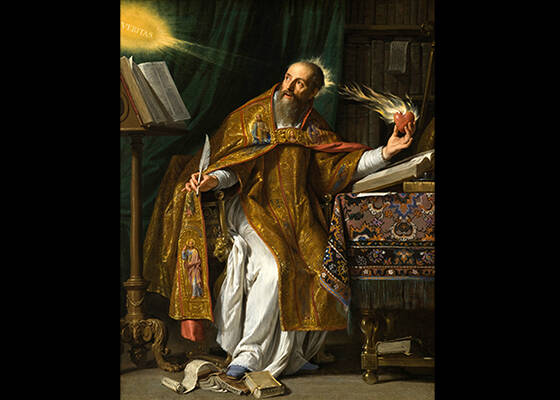 Among the many familiar Catholic references in Joseph R. Biden Jr.’s inauguration speech, one stood out as surprising: a quote from St. Augustine.

St. Augustine was a fourth-century priest, bishop and theologian who has had a tremendous impact on Christianity—Catholics and Protestants. A great influence on both Thomas Aquinas and Martin Luther, he is considered a Doctor of the Church for his work on Scripture, the Trinity and grace, among other things. He also had a profound influence on monasticism and asceticism through his letter that became codified as the “Rule of St. Augustine.” Hailing from Northern Africa and a keen student and critic of Roman and Greek thought, his life and work are also reminders that, from its early days, Christianity was a pan-Mediterranean phenomenon that encompassed many cultures.

He is also, however, popularly associated with the idea that Christianity, and Catholicism in particular, hates the body and sex. More broadly, he is often said to have held earthly life to count for little, denying that there had ever been a just political community. Superficial interpretations of his work have helped to inspire both theocratic movements that seek to impose the church upon the state and “Benedict Option” retreats from the world.

The full context of Augustine’s line is perhaps not as rosy as Mr. Biden might have suggested.

While such controversies will not soon be settled, there is no question that he was a harsh critic of political authority in his own time, even taking the occasion of the 410 A.D. sack of Rome to point out the many failures of the Roman Empire in his famous work The City of God. The best one can hope from politics, Augustine argued therein, is some shadow of peace, what he calls the “tranquility of order.” It is not easy, then, to reconcile his vision of politics with that of Mr. Biden, or indeed any U.S. president, let alone the U.S. Constitution.

So what did Augustine really say? Here is the full line from which Biden quoted, as Professor Chad Pecknold of The Catholic University of America quickly noted:

“If one should say, ‘a people is the association of a multitude of rational beings united by a common agreement on the objects of their love,’ then it follows that to observe the character of a people we must examine the objects of its love.” — St. Augustine, City of God 19.24

As Mr. Pecknold tweets, the full context of Augustine’s line is perhaps not as rosy as Mr. Biden might have suggested. The “love” here is not a feeling but the object of desire, as in the love of one’s life. The loves that can unite a people can be better or worse, e.g., hatred of an enemy or a desire for honor and glory. A people might not even be united by any love at all, meaning that they are not, well, a people. Surveying U.S. society, which just finished a bitter presidential contest between choices as different as Joe Biden and Donald J. Trump, one might be forgiven for thinking that little, if anything, binds us, and what does is rancor, partisanship and deep disillusionment.

Moreover, for Augustine there can be really only two loves: the love of self and the love of God. If one of those is a candidate for the common bond of America, it is not perhaps the latter. Indeed, Augustine in fact thinks that the only city oriented toward the love of God is the invisible city of God, this the name of one of his most famous works.

Perhaps the ultimate question will be how profoundly President Biden understands the inherent good in this vision of St. Augustine and how deeply he will make it his own.

To be fair to Mr. Biden, he did raise the question: “What are the common objects we as Americans love that define us as Americans?” Mr. Biden offers a set of loves from Augustine: “opportunity, security, liberty, dignity, respect, honor and yes, the truth.” Some of these objects fall under the tranquility of order, and ultimately the truth cited by Mr. Biden would have to point to the love of God to be worthy of the name, although Mr. Biden did not draw that connection.

Mr. Biden also offered a diagnosis of what has kept us from our loves:

Recent weeks and months have taught us a painful lesson. There is truth and there are lies. Lies told for power and for profit, and each of us has a duty and a responsibility as citizens, as Americans, and especially as leaders, leaders who have pledged to honor our Constitution and protect our nation to defend the truth and defeat the lies.

“Lies told for power and for profit” need not be far away from St. Augustine’s view, although Mr. Biden obviously did not offer a dissertation on the subject. Notably, for St. Augustine it is the love of self to the exclusion of God and neighbor that separates us from the love of God, although there is a mystery to the pride at the center of that evil. The predictable human failure to reckon with such pride leads to the dominance of self-deception in politics: We not only lie to others as we commit injustices against them, but we lie to ourselves about the evil that we are doing. Augustine would certainly agree with Mr. Biden on the prevalence of lies in America, although Augustine was always quick to turn such diagnoses on the speaker.

Today’s inauguration confirmed that Mr. Biden’s presidency will offer ample fodder to Catholics to disagree on the traditions, teaching and practices of Catholicism, and indeed on what it means to be a Catholic. But perhaps the ultimate question will be how profoundly President Biden understands the inherent good in this vision of St. Augustine and how deeply he will make it his own.